An Illegitimate Child in Mecklenburg, 1850 by Carol P. Christ

In our ritual on the Goddess Pilgrimage to Crete this May, I will have two new names to add to my mother line. The name Sophia was passed down through the maternal line for at least four generations. I am sorry it was not handed down to my grandmother, my mother, and me.

When I left for Germany a little over a month ago, I knew that Dora Sophia Bahlke was the mother of my grandmother Lena Marie Searing and that Dora Sophia’s parents were Anton Bahlke and Maria Hundt, immigrants from the small towns of Parum and Dummerhutte, in Mecklenburg, Germany. I did not have their parents’ correct names, and I had very little information about their lives in Germany. I have now put some flesh on the bones. 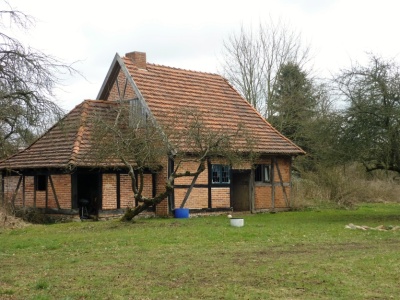 A traditional house in Parum

Anton Bahlke and Maria Hundt were confirmed in 1841 in the Evangelical Lutheran Church in Parum. When I visited the church, the organist was practicing on an organ she said dated from the early 1800s. The main part of the church must have looked much as it does today when our family members were baptized, confirmed, married, and buried in it in the 1700s and 1800s.

The church in Parum

Life in Mecklenburg was difficult in those days. In 1820, the serf system was abolished. This was not done to “free the poor” from servitude. Quite the opposite: the serf system was abolished to “free the aristocracy” from its duty to care for the poor who worked their land. Many former serfs were reduced to the position of landless day laborers. As in other parts of Germany, laws were passed to prevent poor men from marrying. Due to this situation, one-third of the population of Mecklenburg, about 250, 000 people, decided to emigrate. Many found that emigrating was the only way they could marry and raise a family.

The ruling elite at Ludwigslust oppressed my ancestors.

Anton’s father was a “cottager,” a disenfranchised serf who owned only the small piece of land surrounding his cottage; he also worked as a carpenter and a day laborer. Maria’s father was a cottager; he supplemented his income working as a “forester,” maintaining the forests and cutting trees for firewood. Maria’s paternal grandfather was also a cottager. Her maternal grandfather was a day laborer, who moved around to find work. All of these families were “dirt” poor, not owning enough land to support themselves. Anton Bahlke was a blacksmith, but this profession could not have provided him with a stable income, as it appears that he was not allowed to marry.

According to the biography of their son William, published in Gratoit, Michigan, the marriage of his parents took place shortly before their departure for the United States in July, 1854. However, there is no record of this marriage having occurred in Parum from 1850 to 1854. Anton Bahlke and Maria Hundt were listed separately on the alphabetical passenger list for their journey to America, an indication that they were not married when they left. They said they had a common surname on arrival, but a shipboard marriage is unlikely.

(Shockingly to me) they acknowledged a child, Caroline M (Line or Lena) Hundt (Bahlke), born in 1850 in Germany. Her death certificate lists them as her parents. This child did not travel with them to the United States in 1854. Instead, Line Hundt, age 16, of Dun [Dummerhutte], Mecklenburg departed for New York on May 5, 1866 from Hamburg. By the time of 1880 census she was married and living in in Pewamo, Ionia, Michigan, not far from her parents.

I suspect that Anton and Maria were restricted from marrying when Line was born and that they left her with Maria’s mother when they emigrated. Dora Sophia Bahlke must have felt close to the older sister who arrived when she was 8 years old, for she named my grandmother Lena Marie after her.

Here is what I imagine my great-great-grandmother might have had to say about all of this:

Though I went to school to learn to read the Bible, I was also working on our small plot of land from a young age.

When I could escape my chores, I would set out with one of my brothers or sisters through the fields and forests to the Dummersee.

There I sometimes caught a glimpse of Anton fishing or playing with his friends. When we were older we used to meet secretly. We pledged to marry, but we knew we would have to wait until Anton had the means to start a family. 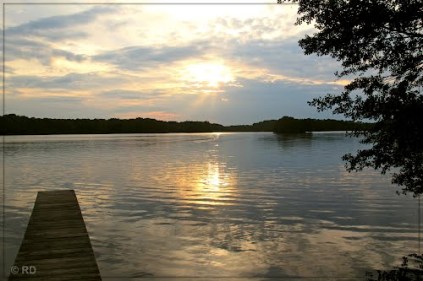 I had just turned 22 when I discovered I was pregnant. Anton could not get permission to marry me. I was afraid to tell my parents. They were not happy, but what could they do? They agreed to help me raise the baby. She was named Caroline Maria, but I called her Line. How I wished Anton and I could have made a home together with her.

Fearing that I would get pregnant again, my parents tried to keep me from seeing Anton. Finally, we decided that the only way to be together was to leave Mecklenburg. My mother insisted that she could not bear to lose both me and Line. Leaving my daughter with my mother was the hardest thing I ever had to do. With my mother on one side and Anton on the other, I had no choice.

When Anton and I settled on the farm in Lyons, I had Mary, and then Dora, Albert, and William. None of those children made up for Line. It was worse after Mary died. How I longed to see and hold my Line again. My mother would not let her go. When she turned 16 Line told my mother she was leaving. She was practically a woman herself, when she arrived in Lyons. It had been 12 years since I left her. How we clung to each other. How many tears we cried.

“But these stories are so sad,” one of my friends responded as I was telling her about what I had discovered in Germany. This of course is why the stories were not passed down to me. And yet, they are my stories. They help me to learn that nothing human is alien to me.

My grandmother was terribly embarrassed when my brother’s young wife gave birth less than nine months after their marriage. I wonder if she knew her grandmother’s story.

*Thanks to Christa Schoeniger for accompanying me in Mecklenburg.

Update: The records we found in the Evangelical Church archives in Schwerin have now been posted on Ancestry. I have learned that Anna Sophia Seehasse’s father came from the island of Poel and that her mother’s name was Marie Dorthie Josten. I have also discovered a record showing that the father of Line was Carl Friedrich Bahl an itinerant shoemaker from Stavenhaven who passed through Dummerhutte (no apparent relationship to Anton Balke.)

Goddess and God in the World: Conversations in Embodied Theology with Judith Plaskow will be published by Fortress Press in summer 2016. Exploring the connections of theology and autobiography and alternatives to the transcendent, omnipotent male God.