I’ve been thinking a lot about tipping points of late.

According to Malcolm Gladwell’s debut book, The Tipping Point: How Little Things Can Make a Big Difference (2000), a tipping point is “the moment of critical mass, the threshold, the boiling point” when an “idea, trend, or social behavior crosses a threshold, tips, and spreads like wildfire.”

The term apparently originated in epidemiology to describe a situation when an infectious disease can no longer be prevented from spreading more widely. Tipping points are essentially turning points where whatever comes next can not be the same as what came or was before.

In my fields of study, theology and philosophy, it’s clear that feminist scholarship reached its tipping point long ago—well before I began my graduate studies in the late 1990s. As many readers of this blogsite know, Women’s Studies is an established department in many institutions of higher learning (even as it continues to face questions about its legitimacy and continuing pressures of budget cuts in some quarters), feminist journals have long been producing high-quality articles (viz. the flagship Journal of Feminist Studies in Religion was founded more than three decades ago in 1983), and even academics who don’t explicitly identify as feminist can no longer simply ignore “the woman question” in their work as legions of (male) academics once did as a matter of course without repercussion.

That feminist scholarship has long crossed the threshold at least in academia, however, does not, of course, mean that our work as feminists within the academy is complete.

For instance, how many of you have ever attended a conference where all the panelists were men? That still all-too-common phenomenon even has a cheeky name – the “manel” or all-male panel. This hilarious “Congrats, you have an all male panel!” tumblr is attempting to document “all male panels, seminars, events, and various other things featuring all male experts.” For kicks, readers are encouraged to add a David Hasselhoff stamp to their photo or screenshot before submitting. (In all fairness to Hasselhoff, there’s no evidence that he approves of manels; the tumblr’s founder apparently selected him as a quasi-patron saint of all-male gatherings given his embodiment of “white masculinity” during his heyday on the hit 1980s t.v. show, Knight Rider). 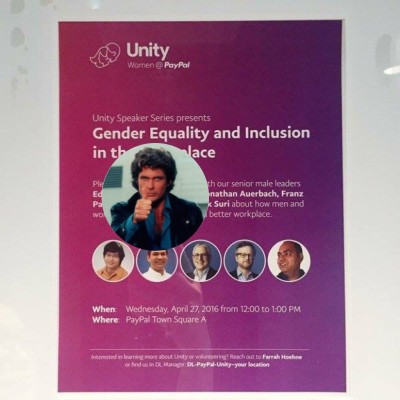 Any feminist who scrolls through the submissions will likely find herself laughing at the hilarity of the smug David Hasselhoff stamp, while simultaneously lamenting the fact that manels in this day and age still exist.

Clearly then, gender diversity (on panels) has not yet reached the tipping point. Yet the “name and shame” strategy of this tumblr and development economist’s Owen Barder’s encouragement for experts to take “the Pledge” (“At a public conference, I won’t serve on a panel of two people or more unless there is at least one woman on the panel, not including the Chair” )– are clearly attempting to make manels a thing of the past. 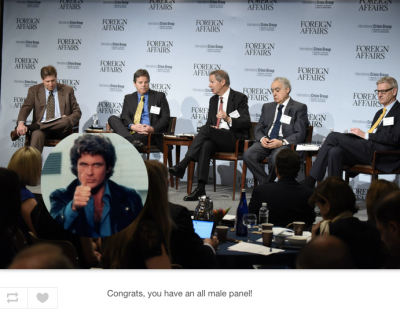 This photo is from an April 27, 2015 sponsored by Foreign Affairs entitled “The Changing Face of Conflict.”

There are so many more “tipping points” that I’d like to see in academia. Perhaps the biggest one is getting to a situation where it would no longer be acceptable to frame racial issues in black and white terms—as if the matter in the U.S. or elsewhere was binary. I’d also love to get to the tipping point where anthropocentrism in scholarship was as noticeable and problematic to readers as, say,  pro-slavery attitudes that one can find in many classical texts.

What tipping point would you like to see? What small or big thing(s) are you doing to bring it about?

Grace Yia-Hei Kao is Associate Professor of Ethics and Co-Director of the Center for Sexuality, Gender, and Religion at Claremont School of Theology. She is the author of Grounding Human Rights in a Pluralist World (Georgetown University Press, 2011) and co-editor, with Ilsup Ahn, of Asian American Christian Ethics (Baylor University Press, 2015).

Like Loading...
‹ What Does Mother’s Day Mean in a Patriarchal and Matricidal Culture? by Carol P. Christ
American Renaissance Festivals and the Yearning for Merry England ›