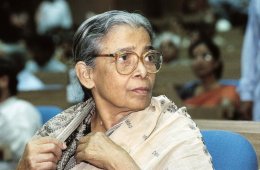 Mahasveta Devi died last month at the age of 90 in Kolkata, India. A widely acclaimed Bengali writer, she identified as an activist first, clearly evident in her meticulously researched “fiction.” Most of her stories champion the cause of those living on the margins of society, particularly the Adivasis or original inhabitants of India; poor, unemployed and itinerant, they traditionally subsisted off the land, and continue to struggle against exploitative upper caste landowners.

I cannot claim to be an expert on Devi or her activism, but there is a story I read a few years ago, which never fails to haunt me, whether because of the rawness with which she describes the harsh reality faced by tribal people or because of what can be seen as the violent but ultimate triumph of its female protagonist, I cannot tell. Perhaps because of both, or because of more complex emotions which are hard to capture as they manifest in goose-bumps and a deep pain in the inner recesses of the chest when reading it for the seventh or eighth or twentieth time.

The piece in question is “Draupadi.”[1] Like most of her stories, Devi’s “Draupadi” is female-centric as it captures the lives of the Adivasis involved in the West Bengal peasant revolt of the Sixties and Seventies. A bit of a preamble is in order, however, to fully understand the implications of its title, “Draupadi,” which centers on a woman called Dopdi. Dopdi is the simplified form of the Sanskrit name, Draupadi, a powerful character in Indian mythology. Throughout the story, Devi positions the dichotomy between the (seemingly) unsophisticated and complex; readers do not know how exactly Dopdi, a lowly tribal who has “no right to heroic Sanskrit names”[2] has come to acquire this particularly august name reserved for upper-caste Indians, a name that is too sophisticated for Dopdi to even pronounce. Through this contrast, Devi sets up what is to come – the struggles between the aboriginal Indians and their Aryan oppressors or, on a meta level, between the oppressed and oppressors – while presenting the reader with a chance to contemplate a handed-down, unquestioned social system.

Draupadi is the heroine of the Mahabharata, that other famous Indian epic alongside the Ramayana. It is not surprising, however, that Sita, heroine of the Ramayana, rather than Draupadi, fits the archetype of the “ideal Indian woman.” After all, although the Mahabharata, much like the Ramayana, seeks to privilege male power, Draupadi, an upper class, upper caste Aryan woman like Sita, is considerably more outspoken than her Ramayana counterpart. Draupadi’s most famous outburst occurs at the time when she is literally a pawn in the hands of the two warring families, the Kauravas and Pandavas; she chastises her husbands (she is married to the five Pandava brothers), first, for pawning her in a game of dice, and then failing to protect her honour when the Kauravas attempt to disrobe her before a full assembly after claiming her as their winnings. Draupadi, a devotee of Lord Krishna, calls upon him to save her honour, which Krishna obligingly does by creating unending reams of the sari she is wearing.

In “Draupadi,” Devi subverts a number of issues: she presents Dopdi as the antithesis of her Mahabharata namesake – monogamous, “untouchable” or belonging to the lowest caste in the Hindu social order, unkempt with matted hair, and clad only in a “cloth,” which is eventually torn off her when she is violently raped (with no divine intervention to save her honour) by those who succeed in capturing her. But like Senanayak, the leader of her captors, who represents the government and the “law and order” it stands for, we, the readers, eventually realize that we may not have understood the Other (in the form of Dopdi), and it is precisely in not doing so, we have come to recognize “its” power (“it” because in categorizing something/ someone, we often end up dehumanizing and alienating them). Although she may be physically broken, raped and taunted by her captors, Dopdi’s victory lies in the fact that Senanayak cannot emotionally break her; ultimately it is he who fears her, and recognizes her for who she is – a force to reckon with. Devi brilliantly switches between the names Dopdi and Draupadi; the protagonist goes by “Dopdi,” while the outsider – the reader, the law, the authority – considers her fate through the evocation of the mythical heroine, “Draupadi.”

The story ends on a particularly haunting note:

“Where are her clothes?

Won’t put them on, sir. Tearing them.

Draupadi’s black body comes even closer. Draupadi shakes with an indomitable laughter that Senanayak simply cannot understand. Her ravaged lips bleed as she begins laughing. Draupadi wipes the blood on her palm and says in a voice that is as terrifying, sky splitting, and sharp as her ululation, What’s the use of clothes? You can strip me, but how can you clothe me again? Are you a man?

She looks around and chooses the front of Senanayak’s white bush shirt to spit a bloody gob at and says, There isn’t a man here that I should be ashamed. I will not let you put my cloth on me. What more can you do? Come on, counter me – come on, counter me –[3]?

Draupadi pushes Senanayak with her two mangled breasts, and for the first time Senanayak is afraid to stand before an unarmed target, terribly afraid.”[4]

Senanayak’s eventual confrontation with the “mad,” naked Dopdi (or perhaps her confrontation of him?), and his ultimate recognition of who she really is, is ironically rooted in a fear of her. Devi evokes the image of the great goddess Kali (through Dopdi’s terrifying and disheveled form), which is interesting because scholars believe Kali to be of non-Aryan and possibly tribal origins like Dopdi herself. But by letting Dopdi speak up in all her “nakedness” when she refuses to re-clothe herself, Devi additionally seems to be questioning the need for outsiders, whether scholars or feminists, to intervene on Dopdi’s behalf by “clothing” her. If one wishes to get a better understanding of the subaltern, whether women or tribals or any other underprivileged member of society, one has to be able to accept the fact that they are complex and cannot necessarily be deciphered, much like the song that Dopdi sings when she is first captured – although mundane, it resists “upper-caste” translation; Senanayak cannot break down her simplistic language, giving rise to the fear that he cannot control her.

“Draupadi” is of course a lot more complex and nuanced than I have presented. And that is where Mahasveta Devi’s legacy lies – in the ability to acknowledge the complexities of the world we live in, without attempting to clothe or “translate” them within a linear framework (which, ironically, is what I have done with “Draupadi” here).

[3] “Counter” or “encounter” refers to surreptitious deaths by police torture.

Vibha Shetiya was born in India and raised in Zambia before moving back to India as a teenager. She has been living in the US since 1999. She has degrees in journalism and religion and a Ph.D in Asian Cultures and Languages. Vibha moved to Albuquerque in 2014 from Austin where she completed her dissertation on feminist versions of the “Ramayana,” an ancient Hindu epic. She teaches at the University of New Mexico.