Home › Feminism and Religion › The Blood of Isis by Deanne Quarrie

The Blood of Isis by Deanne Quarrie

Over the years I have seen the image of the amulet called the Knot of Isis but in all honesty, never paid it much attention. I am on the organizing committee for our annual Goddess Festival here in Austin this year and we have chosen Isis as our Goddess to honor. The intent is to reclaim the Sacred Name of Isis and celebrate Her power, especially for women.

I was supposed to go to Brazil this summer to speak. One thing that was to have happened on my trip was to be my ordination as a Priestess in the Fellowship of Isis. However, because I became very ill and was hospitalized, I had to cancel my trip. In preparation for this ordination, I created an altar for Her and began to get to know Her. I have always had special affinity for Hathor and Sekhmet or as I call them together, HetHeru. And so, began my relationship with Isis.

The Egyptian Book of the Dead describes Isis as, ” She who gives birth to heaven and earth, knows the orphan, knows the widow, seeks justice for the poor, and shelter for the weak.” She gets Her name, Isis, from the Greeks, but to the Egyptians, She is known as Aset or Iset, meaning Queen of the Throne. Her earliest headdress was that of an empty throne, representing the concept of Her as Throne-Mother, the mother of the king.

Isis embodied a wide spectrum of qualities: the healing arts, magic, relationships and sexuality, a bridge between the worlds, fertility and much more. She holds in her power the Breath of Life. The message here is that we too have the power within us, a power to save and to heal our world.

In doing my research I came across many mentions of the Knot of Isis. When I read that the Knot of Isis was also called the Blood of Isis the magic set in! Many of you are very familiar with what happens when suddenly something triggers you and it becomes an unrelenting compulsion to know more!

So I have read every site I can find on the Internet. I have pulled out my copy of Isis Magic by M. Isidora Forrest. I bought The Mysteries of Isis by DeTracy Regula as well as Awakening Osiris by Normandi Ellis. See? Consumed! 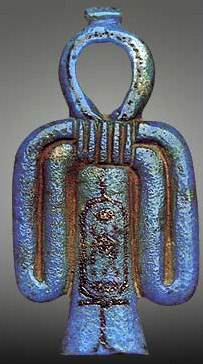 There are many guesses as to the meaning of Her Knot. It is often called the Tjet, or simply the Tet. We do know it was used extensively in funerary rites as a protection for the dead. It signified protection both above and below. It also represented resurrection for those protected by it. It was meant to also help those who died to be with their gods after death.

“At the ends of the universe is a blood-red cord that ties life to death, man to woman, will to destiny. Let the knot of that red sash, which cradles the hips of the Goddess, bind in me the ends of life and dream … I am the knot where two worlds meet. Red magic courses through me like the blood of Isis, magic of magic, spirit of spirit. I am proof of the power of the gods. I am water and dust walking.” The Knot of Isis from Awakening Osiris by Normandi Ellis

What fascinated me is the idea that it possibly represented the sanitary cloth used to catch the menstrual blood of Isis, the Sacred Mother. It was found in tombs placed between the legs of women who had died while pregnant. It is said that Isis herself used it as sort of a tampon within her vagina while she was pregnant with Horus to keep from having a miscarriage. The Knot was typically found made of carved red stone – carnelian – red jasper – all colors of the life giving Blood of Isis, the menstrual blood of Isis.

The women who served as her priestesses were healers and skilled midwives. They could interpret dreams and control the weather by combing and braiding their hair (knot magic). They wore fringed shawls wrapped around their robes, tied in a knot at their breasts in such a way as to look like the Knot of Isis, a tradition continued by those who serve her today.

There is an inscription inside one of the pyramids, “Isis and Nephthys work magic on Thee with knotted cords.” Osiris and the Egyptian Resurrection by Wallis Budge

I practice knot magic. It gives me great pleasure to know that women have used knots in their magic since these ancient times, again confirming the Power of Isis for women. I use the Knot of Isis for protection, discreetly placed wherever needed. As I identify as a Dianic Witch, I wear the red cord knotted around my waist. There was a time in my life when I did not feel safe in my community. I did not give in to my fear, but instead, braided magic into my hair as I prepared to venture out. I called them my power braids! I chanted as I braided in the magic!

Braid the Magic
Braid the spell
Hold the thought
That all is well.

Braid the Will
Make it strong
Return to sender
Any wrong.

Warrior Braids
Make the spell
Wrapped in love
All is well.

I will be co-priestessing at the opening ritual at our festival and we will be using the Knot of Isis as we invoke the protection of Isis at the Four Quarters.

We, who practice Women’s Spirituality, know well the power of the womb. Our womb space, whether we bleed or not, or even if we no longer have a uterus, is our power center and is what makes our magic so strong. We honor our menstrual cycles and the stages in our lives connected with the birth/death/rebirth cycle of our blood. We honor the power of menstrual blood and use it in our magic. As women, we are connected by our blood. The Knot of Isis, the Blood of Isis, represents that power in us. What more powerful spiritual symbol for women could possibly exist?

Egyptian Treasures from the Egyptian Museum in Cairo

Deanne Quarrie. D. Min. is a Priestess of the Goddess. She is the author of five books. She is the founder of the Apple Branch where she teaches courses in Feminist Dianic Witchcraft, Northern European Witchcraft and Druidic Shamanism. She mentors those who wish to serve others in their communities. She is also an Adjunct Professor at Ocean Seminary College and is the founder of Global Goddess, a worldwide organization open to all women who honor some form of the divine feminine.

Like Loading...
‹ Body Sovereignty: Tracing the Relationship Between Feminism & Fat by Sydney Bell
I’ve Got that Rio Fever by Anjeanette LeBoeuf ›