Max Dashu’s  Witches and Pagans: Women in European Folk Religion 700-1000 challenges the assumption that Europe was fully Christianized within a few short centuries as traditional historians tell us. Most of us were taught not only that Europe became Christian very rapidly, but also that Europeans were more than willing to adopt a new religion that was “superior” to “paganism” in every way. Careful readers of Dashu’s important new work will be challenged to revise their views. When the full 15 volumes of the projected series are in print, historians may be forced to hang their heads in shame. This of course assumes that scholars will read Dashu’s work. More likely they will ignore or dismiss it, but sooner or later–I dare to hope–the truth will out.

History has been written by the victors—in the case of Europe by elite Christian men. These men may have wanted to believe that their views were widely held, but Dashu suggests that they were not. Combing artistic and archaeological records, Dashu finds (to give one example) that images of Mother Earth nursing a snake are far from uncommon and can even be found as illustrations in Christian documents and on Christian monuments. Clerics rage against people—particularly women–who continue to visit holy wells and sacred trees and to practice divination and healing rituals invoking pagan powers. To paraphrase Shakespeare: “Methinks the cleric doth protest too much.” Were these things not happening and happening often, there would have been no need to condemn them.  Using these clues, Dashu provides intriguing new readings of the Poetic Edda and Norse sagas.

Reading this book is like opening a box filled with jewels left to you by ancestors you never knew you had. The sheer number of facts and suggestions of facts is overwhelming. Dashu herself is the first to admit that she has not yet put all the pieces together into a new comprehensive her-story of Europe. Still, it is hard to deny that if her work is taken seriously, this is precisely what others will be inspired to do.

Marija Gimbutas’ early work on women’s planting and harvesting ritual songs of her native Lithuania demonstrated that women continued to pass the “secrets” of agriculture from generation to generation for thousands of years. Although I was aware that women’s invention of weaving was remembered in the later Greek tradition of the “Three Fates,” I did not have a clear picture of women passing on the “secrets” of spinning and weaving through ritual and song. 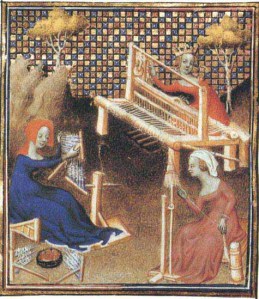 The women spin and weave together, their work framed by the trees of life.

The early chapters of Witches and Pagans fill in this blank. Our European ancestors did not just sit down and get on with the work of spinning and weaving. They invoked  female powers–Goddesses, ancestresses,  and spirits– when they began to spin and used their distaffs (wooden sticks or poles that held the unspun flax or wool) as divining tools and magic wands. (Here’s an idea: why not replace ritual swords and knives with a distaffs?) Priests castigated women for invoking non-Christian deities while they wove and for tying pagan symbols onto their looms. Once while watching a group of old Greek women carding wool, I was told “our mothers” taught us how to do this. I wish I had asked them if the teaching was via song, for surely it was.

A clearer picture begins to emerge. Women preserved ancient mysteries that celebrated female powers of creativity as they went about the tasks of their daily lives. It was not so easy to stamp these practices out, because women understood their songs and rituals to be essential for the continued flourishing of life.

Thank you, Max for your brilliant work. May it change the way we see the world!

Carol P. Christ’s new book written with Judith Plaskow is Goddess and God in the World: Conversations in Embodied Theology–order now. Ask for a review copy (for blog or print) or exam or desk copy.  They are co-editors of Womanspirit Rising and Weaving the Visions. Carol wrote the first Goddess feminist theology, Rebirth of the Goddess and the process feminist theology, She Who Changes.

Listen to Judith and Carol’s first interview on the book on Northern Spirit Radio and their second on WATERtalks.

Carol P. Christ leads the Goddess Pilgrimage to Crete. Space is available on the fall tour October 1-15. Join now and save $150.

Like Loading...
‹ The Red Thread, the Red Heifer, and Red Ritual by Jill Hammer
The Restorative Act of the Rite-13 Ritual by Katey Zeh ›