I had planned to write my October post about the election. Out of respect for everyone’s election fatigue, I’ll give the subject one paragraph only. I voted for Bernie Sanders in the primary. Like Bernie himself, I will vote for Hillary Clinton in November. To Bernie supporters who intend to vote for a third party candidate or abstain, because they cannot in good conscience vote for Hillary, my own conscience prompts me to make one appeal. Forget Hillary. Vote for the people and the principles she is pledged to represent. Flawed as the two party system may be, there are stark differences between the Democratic and Republican platforms in this election. Reproductive rights hang in the balance as well as whether this nation will address or deny climate change, just to name two of a host of critical issues. Enough said.

No matter what happens on November 8th, we will still face the challenges of climate change, global strife, populations displaced by war and catastrophe, the clash of cultures.  The rest of this post may be irrelevant to someone who is struggling for survival. I know I am lucky to have a relatively peaceful place to live and the means to sustain myself. But for what it’s worth here are three sources I turn to for comfort, strength, and perspective in troubling times.

Rocks. Three years ago, I moved to the Shawangunk Ridge, known for its many and various rock formations. Each one is so distinct, I think of the formations as communities of stone people. Whenever I go to visit the stone people, I become quiet, attentive, awed. Some of the communities may have been formed by the cataclysm of the ice age. Now they are changing more slowly with the coming and going of water and vegetation. They remind me that my time, all times, are fleeting; my human perspective, small. Here is one attempt to translate what I sense from the stones.

song of the stones

why do you say ‘heart of stone?’
what do you know of either?

we could teach you lessons
of catastrophe, the violent heave,
the deafening tumble, then
the silence, the silence,
endurance, the slow sweetness
and sorrow of water shifting
our shape, finding our faces.

here is what we ask of you:
walk among us, stand,
sit still. look till you see
our faces, till you know our faces,
learn them by heart, turn
your hearts to stone. 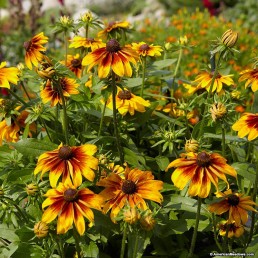 Flowers. I came to gardening late in life and still don’t know what I am doing. Fortunately the plants are more certain of their purpose and are generous in responding to kindly intent. Instead of over eons, plants go through cycles every season in waves: the early and late spring flowers, the high summer flowers, the late summer and autumn flowers. Always something coming into bloom as something else dies. I go through  cycles of marveling and mourning with each plant. Gardening is practical exercise in momento mori. I don’t know why I find this contemplation comforting, but I do. With climate change, even the seasons and what will thrive is no longer predictable. I mourn that loss, too. Still the tiniest bloom can fill me with joy. Here is a recent poem about the late-season garden.

how much more lenient I am
(though I still keep pulling knotgrass)
and deadheading and pruning away
dead branches) mostly
I just look, let you surprise me
with your quirky grace,
yellowing hosta leaves
red lily of the valley berries
fallen leaves from the butternut tree
caught in the black-eyed susans
who are beginning to dry and brown.
there’s wild beauty in the overgrown
downhill tangle, small orchid-like
purple flowers mixed
with yellow and orange jewel weed,
and a plant attacked by beetles
in yellow bloom again.
here and there fronds
of something edged with white.
I know you all even if
I don’t know all your names,
your aging bravado, your daring
second blooms, your brown
seedy ghosts (I have not cut down
the dry sentinel mullein towers.)
you show me my own time of life
and give me the courage
to go on surprising myself.

Circles. Over the years, I have participated in many circles, ritual and otherwise. They have their own ebb and flow. Last week I met with two different circles in two days. I was reminded that something as simple as sitting in a circle can offer great sustenance in troubling times.

two women’s circles in two days,
one outside at a medicine wheel,
one around a kitchen counter,
food and talk and comfort.
then we sit on the bare floor
knees touching, holding hands,
and pray for as long as our joints allow.

so many intersecting circles
past and present and to come.
somehow they still exist
even when we rarely meet.
what are these circles of women?
drops in some still, deep water
rippling out beyond our sight.

I would love to hear from FAR readers and writers about what sustains you in these times.

Elizabeth Cunningham is best known as the author of The Maeve Chronicles, a series of award-winning novels, featuring a feisty Celtic Magdalen who is no one’s disciple. Her debut mystery novel, Murder at the Rummage Sale, has just been published. So Ecstasy Can Find You is her most recent collection of poems. An interfaith minister and counselor, she lives in New York State’s Hudson Valley. She is a fellow emeritus of Black Earth Institute.

Like Loading...
‹ The Heart of the Labyrinth: BOOK REVIEW by Mary Petiet
Rituals for Our Sons, by Molly Remer ›