Home › Activism › This Is How Liberal Democracy Dies: Will We Let It? by Carol P. Christ

This Is How Liberal Democracy Dies: Will We Let It? by Carol P. Christ

“This is apparently how liberal democracy dies. It vanishes very quickly with an Executive Order.”– Ska Keller

In a powerful yet softly-spoken speech to the European Parliament, Green Party Germany Representative Ska Keller explained that rights and liberties we we take “for granted” and consider “natural,” “normal,” and “guaranteed” can be taken from us in an instant.  The America we took for granted, an America built on respect for immigrants and religious freedom, has vanished before our eyes. With the stroke of a pen, the President of the United States revoked it. 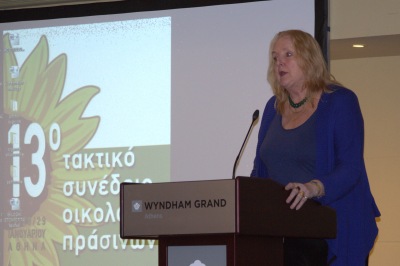 Carol telling the Green Party Greece the US President is a malignant narcissist.

Like many others, I am in a state of shock. Has the dream of liberal democracy died in America? Will we be able to repair and reinstate it? Ska Keller reminds us that freedom can never be taken for granted, but must be fought for and defended every day. Thousands of Americans have taken to the streets and are flooding the phone lines of congress trying to do just that. Will we succeed? At this point the outcome is unknown. In recent days, I often feel frozen in place, waiting for the next piece of horrible news, taking heart from stories of resistance, and hoping against hope that the tide will turn.

Much of the rhetoric decrying the President’s anti-Muslim order appears to assume that our democracy was functioning “just fine” or “pretty well” before Trump took over. In fact, our democracy was not “just fine” before Trump took over. It remains an open question whether the concerted Republican effort to restrict the voting rights of African Americans is responsible for the Republican victory and victories. It remains an open question how much the intervention of Russia in the election contributed to Trump’s election and whether Trump or his cronies colluded with a foreign power to steal the election and got away with it.

And let us not forget that, though America was founded upon ideals of freedom and justice for all, slavery was not abolished by the Founding Fathers; they did not view Native Americans as human beings with rights equal to their own; and they did not consider their wives and daughters to be worthy of full citizenship.

Moreover, Trump’s order was not the first immigration restriction. The Chinese Exclusion Act of 1882 prohibited the immigration of Chinese laborers and their families. The Immigration Act of 1924 was crafted to stem the tide of Eastern and Southern Europeans (mainly Catholic, Jewish, and Christian Orthodox), restricted the immigration of Africans, and banned Arabs and Asians. The policies established by the 1924 act remained in place until 1965 (which is why many Jews fleeing the Nazis were denied refuge in the United States).

Knowledge of this history makes it abundantly clear that our democracy has been flawed from its  beginnings. Though the founders affirmed freedom and liberty for all, America has also stood for the landowner supremacy, male supremacy, white supremacy, Anglo-American (English) supremacy, Protestant supremacy, Christian supremacy, and colonial appropriation of land. Moreover, the “land of the free” was established through bloody warfare against Native American peoples, England, France, and Mexico. This too is “our” “American” history, and it may be one of the reasons that “the American ideal” means different things to different people.

The Statue of Liberty’s plaque is inscribed with the poem “New Colossus,” written by Jewish American Emma Lazarus:

Not like the brazen giant of Greek fame,
With conquering limbs astride from land to land; 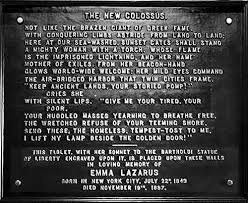 Here at our sea-washed, sunset gates shall stand
A mighty woman with a torch, whose flame
Is the imprisoned lightning, and her name
Mother of Exiles. From her beacon-hand
Glows world-wide welcome; her mild eyes command
The air-bridged harbor that twin cities frame.
“Keep, ancient lands, your storied pomp!” cries she
With silent lips. “Give me your tired, your poor,
Your huddled masses yearning to breathe free,
The wretched refuse of your teeming shore.
Send these, the homeless, tempest-tossed to me,
I lift my lamp beside the golden door!”

In this poem, Lazarus contrasts the Colossus of Rhodes, a Conquering Warrior, with the Mother of Exiles, defining America as a place of “world-wide welcome.”

Another American, the lawyer and slave-holding plantation owner Francis Scott Key, viewed America through the lens of war, “the rockets’ red glare, the bombs bursting in air.”

O say can you see, by the dawn’s early light,
What so proudly we hailed at the twilight’s last gleaming,
Whose broad stripes and bright stars through the perilous fight,
O’er the ramparts we watched, were so gallantly streaming?
And the rockets’ red glare, the bombs bursting in air,
Gave proof through the night that our flag was still there;
O say does that star-spangled banner yet wave
O’er the land of the free and the home of the brave?

When this song was adopted as America’s National Anthem in 1931, it defined Americans as victors who pledge allegiance to a flag. I don’t know how about you, but I found the singing of “The Star-Spangled Banner” to be chillingly appropriate at Trump’s inauguration. Like the meaning of the Bible, the meaning of the American dream is a matter of interpretation, rooted in standpoints and communities.

Update: A federal court has blocked the executive order: but let us not forget that the Republicans stole a Supreme Court seat.

The featured image from the cover of Der Spiegel of the President beheading the Statue of Liberty created by Cuban-American artist Edel Rodriguez bears a striking resemblance to classical Greek images of Perseus holding the severed head of Medusa in celebration of the conquest of the civilization of the Goddess. 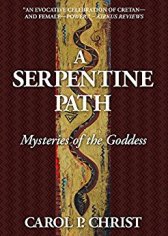 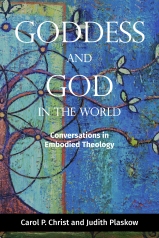 Be among the first to order A Serpentine Path, Carol’s moving memoir. Carol’s new book written with Judith Plaskow is Goddess and God in the World: Conversations in Embodied Theology.

Carol wrote the first Goddess feminist theology, Rebirth of the Goddess and with Judith Plaskow co-edited the path-breaking Womanspirit Rising and Weaving the Visions.