Identity and Marriage: Which Christian Conception? by Stephanie Arel

This post explores issues I present in an essay which will be published in the Journal of Theology and Sexuality. In that piece, I consider the term “identity.” I claim that identity and the categories it delineates often present dilemmas when it comes to gender, sex, and sexuality. This is especially the case when considering biological and social data related to sexual fluidity in women. While in the paper I argue that “identity” serves in many ways to stultify, I recognize that we can also interpret the eschewing of identity as something reserved for the privileged – who can afford to discard identity. Marginalized groups, on the other hand, are often at the mercy of identity – it is hoisted as a marker, one that cannot be displaced or removed.

Where I complicate identity relates to its ability to typecast and congeal a self into a definitive configuration. Categorization follows, serving specific ends and bolstering very specific institutions.

Marriage – ideally – takes a variety of forms interpreted and created by the couple who consents to the marriage, making the union their own. All marriages are different, and in the world that I imagine, marriage partners fashion their own rules and standards – re-envisioning or rejecting those projected onto them by law – moral, legal, or natural.

Unfortunately, societal and religious pressures, along with Christian tradition, have solidified marriage into something fixed. The grand narrative that supports the fantasy of an ideal marriage determines it as stable, reassuring, consistent, and of course, always full of love and romance. We could call it a St. Valentine’s Day Marriage. In this type of marriage, the lines between Christian values, romantic love, and capitalist society blur.

Understood by the church as a Western Christian liturgical feast day to honor a Saint, St. Valentine’s Day achieved legendary status in the 18th century after it was associated with romantic love, a gesture with an intellectual tradition in the courtly love phenomenon of the 14th century promoted by Geoffrey Chaucer and his compatriots. (By the way, in Chaucer, this kind of love was often generated outside of the marriage union which was, in his time, one defined by economic and political exchange, where women were childbearing accessories to men.) Most currently, St. Valentine’s Day has morphed into a revenue generating holiday, which still happens to signify, for some, love present between a couple. 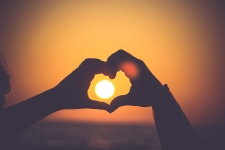 The idea of romantic love – ever present in Hollywood movies as a promise of fulfillment of a life (also a misnomer) – supports a kind of coupling, which offers – at least temporarily –“security by furnishing an identity marker (‘you love me therefore I am, in moments of passion, too, also in time of illness…’); the couple is a durable mirror, a repeated recognition” (Julia Kristeva, Tales of Love, 227). Christian marriage in this framework solidifies identity amplifying into other identities – including a national one – which simultaneously unify while making and categorizing the other. Thus, as it has developed, Christian marriage is very individualistic and insular. It promotes a male to female coupling, and, “because it has merged with the superegotic practice of law,” as Kristeva asserts, “marriage – [in its conception as] a historically and socially determined institution – is antinomic to love” (211). Chaucer tried to tell us this.

I turn to Kristeva again because she expresses what I see as the core problem: “The mythical representation of coupledom responds to a social need. The unity of the group, especially a national group, is nurtured by the fantasy of the primordial union, the parental myth. This original cohesion myth, is what the political apparatus throws at the ‘popular masses’ like wool over their eyes” (Marriage as a Fine Art, 8). This social need for cohesion supports heterosexual, heteronormative marriage. It also perverts the life of anyone who lives or marries outside of that structure. Furthermore, the myth that men necessarily leave their families to merge with a woman has been morphed into theories that marriage is both a social and biological need. The pressure on us to fulfill this need is enormous.

Ultimately, marriage as a structure is dependent on other structures – of law for instance; it ensures a certain belonging in society. Anyone that functions outside of this heteronormative framework, reinforced by conceptions of Christian marriage, is immediately othered. 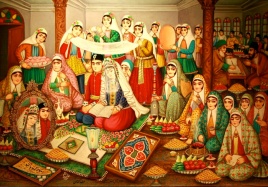 The question becomes: What should we be in Christian marriage? This is not an easy question to answer. And I am not promoting an idea that envisions marriage as imperfect so that one should just “deal with it” – a slippery slope colluded with by religion that justifies staying in bad or abusive relationships. What I am promoting is an idea of marriage as mutually reciprocal. This can be demanding, and it is not always characteristic of romance. Maybe it never is, for some.

We can discover values for mutual reciprocity in Christianity – in the biblical conception of community and in the formulation of the family in the Gospel of Mark. This Gospel disrupts the notion of the male as the head of the household, instead viewing all members of the household as valuable participants. Underneath this assumption of cooperation is an ethics of love and service. Relationality subverts the notion of self-founding subjects with rigid identities and instead asserts the primacy of relationships. As Xochitl Alvizo says, there is actually nothing inherently Christian about imposing pressure on two individuals to live in harmony and romantic love outside of community. From a truly Christian perspective, marriage is a practice of ethics taking place within a household, where identity is fluid, and love is a practice that takes place alongside service.

Each of us has a notion of marriage, and what marriage means, of what it serves and performs. In keeping with Kristeva…she states, in her book written with her husband Philippe Sollers, that her marriage “lasted so well, with such uncompromising vitality…because it never obeyed any law but its own” (Marriage as a Fine Art, x).

Stephanie N. Arel is currently a Post-Doctoral Fellow at Institute for the Bio-Cultural Study of Religion (IBCSR) at Boston University working on the Sex Differences in Religion Project. Her teaching and research interests focus on the intersection of theology, psychology, and philosophy. She is the author ofAffect Theory, Shame and Christian Formation (Palgrave Macmillan 2016) and co-editor of Post-Traumatic Public Theology (Palgrave Macmillan 2016).