…and Ella can’t remember the last real meal she had. After supper with the refugees in the witch’s house, she and the witch put their heads together to begin making significant plans. She’s also been meeting all the refugees who now live on the witch’s farm. She knows first-hand why these people fled the capital and the other cities. “Oh, lordy, yes,” she says. “I used to know all the important people. My dear sisters and I went to all the big events, ate the finest cuisine—” suddenly remembering where she is, she looks down at the table “—oh, dear, but I don’t mean to criticize your cuisine.”

The ravens, all perched on the backs of chairs look straight at her. “Good food, this,” says Kahlil, “except these girls don’t serve eyeballs.” “Stop that,” Domina whispers (if ravens can be said to whisper). “Don’t be so picky. Everybody here gets enough to eat.”

Ella, who is more used to cats and dogs and the occasional parakeet than to ravens, blinks and continues. “I wish I knew where my sisters are now. Thanks to our ‘relationships’ with the princes, we were High Society and—”

Now it’s Edgar. “Oh, yeah? How high? What’re they on to act like they do? Can’t they pay better attention to how the regular people are doing?”

“The princes and everyone else we met…well, they were blind to everything but their own selves,” Ella replies. “That’s why I became interested in Spiritual Matters.” A significant pause. “Witchcraft. Magic on behalf of the people. My dear sisters and I saw what was going on outside the palaces. When Prince Charming finally paid enough attention to me to more or less notice what I was actually doing…well, that’s when he locked me up in the tower. I miss my dear sisters. For a while, I could hang out the window and we could shout up and down. But then….”

“My dear,” says Mrs. Worthington, “the new people who arrive nearly every day tell us…they tell us awful things. Horrors. But what can we do? We’re only ordinary women.”

“Not true!” This from everyone else at the table. “We’ve been doing magic to protect the people from El Presidente.” They all look at each other. “But,” says a very quiet voice, “we don’t actually know what’s working.”

“What we need,” the witch’s voice is very brisk, “is access. Ella, you can describe things, but we must see for ourselves.”

“I agree with you.” Mrs. Fairy reaches into her basket and pulls out a large mirror, which she dusts off a bit and lays on the table. “Let’s use my scrying mirror!” 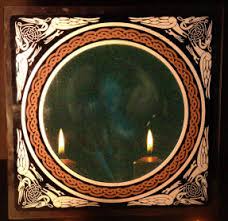 The ravens immediately begin walking around it, looking for their reflections. What they see, however, is a shadowy bluish face. When the face comes closer to the surface of the mirror and looks back at the ravens, Edgar steps up on the frame. “Deep into that darkness peering, long I stood there wondering, fearing,” he quotes. But he’s interrupted by Kahlil, who shakes his head as if to dislodge fleas. “Oh, gimme a break! No more Poe. Like, nevermore!”

The bluish face is clearer now. It seems to be looking at Edgar. “No old poetry, please,” the face says. “Silence is preferable. But it is not required. I am an interactive oracle! Ladies, what is your wish?”

As Mrs. Fairy clears her throat, the women around the table settle themselves more securely in their chairs. A few of them take small talismans out of their pockets.

“Mirror, mirror, on the table,

Show us all that you are able…”

They all lean forward to see and hear more clearly what the mirror will reveal. The mirror begins to smoke, the bluish face seems almost to rise above its surface.

“Another damn quote.” Kahlil shakes his head again and begins marching around the mirror. But suddenly he stops at its northern edge, and the other three ravens stand at the eastern, southern, and western edges. All four raise their wings and make a sound that is not quite a caw.

When they lower their wings and the women can look into the mirror again, the scene has changed. It’s the capital city, except it’s not quite the scenery the refugees remember. There are new flags and banners hanging everywhere. There are billboards with grand slogans printed in huge letters. BELIEVE, OBEY, FIGHT. MAKE US GREATER THAN BEFORE. YOU WILL NOT REPLACE US. There are stiff-postured men (and a few women) in grandiose uniforms. The streets and sidewalks are cleaner than ever before. The cameraman (if such exists in a magic mirror) moves along Make-It-Great Avenue (a new name for the street, the women realize) toward the towering, domed capitol building. Somehow ignored by the guards and the richly dressed people running their highly important errands, the cameraman slips inside, and makes straight for El Presidente’s office, outside of which linger half a dozen princes, each of whom quickly puts on a highly charming smile.

In El Presidente’s office now. There is a curtained anteroom. There is a credenza piled high with fast food. There are three huge-screen TVs. Now focus on El Presidente himself. A tall figure with goldish hair and wearing a $5,000 business suit and a shiny white shirt with enormous gold cufflinks. A red tie. But there’s something about his hair…

El Presidente is a scarecrow! “Our magic is working.” 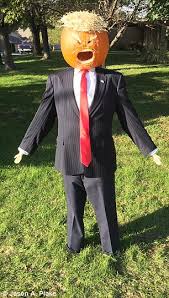 His desk is bare except for what looks like—could it be a mask? Somehow sensing a new presence in his office, the scarecrow picks it up. Yes, it is a mask. He claps it on his face. Now he looks almost human. There are noises coming from the curtained alcove. “Pay no attention to that man behind the curtain,” he mutters.

Invisible hands pull the curtain away. There is a fat, gray man. An obese Gollum? He is moving levers and pushing buttons and tapping words into a keyboard. On his shoulder sits some sort of generic little bird that reaches down and corrects his spelling before he presses Send.

The masked scarecrow stands up and walks around the desk. The fat gray man comes out of the alcove.