Home › Ancestors › Crowding into the Spirit World: Reclaiming a Metaphysics of Multiplicity by Jill Hammer

Crowding into the Spirit World: Reclaiming a Metaphysics of Multiplicity by Jill Hammer 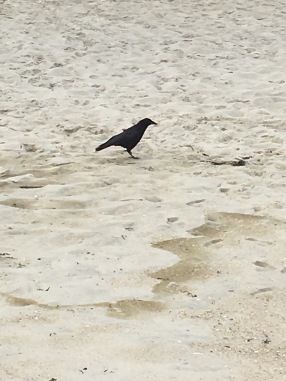 A number of years ago, I had the opportunity to take a class with Chava Weissler, a scholar at Lehigh University who studies Jewish history, community, and sacred practices– particularly those practices related to women.  My fellow students in the class were other rabbis, taking a break from their work in order to do some learning.  Dr. Weissler was teaching about an Ashkenazi Jewish women’s practice known as “soul candles”—the making of candles during the High Holiday season to honor the dead of the community as well as the mythic ancestors.  Candles for Abraham and Sarah were made alongside candles for grandparents and other deceased relatives, using wicks that had been laid out along the graves to take the “measure” of the dead.  During the making of the candles, the candlemakers would ask that these ancestors would pray for the living, just as the living prayed for the dead.  As Dr. Weissler described this practice, a nervous giggle passed through the room.

I remember being shocked.  I understand that my colleagues have varying beliefs around life after death and around spirit in general.  And, hearing my colleagues laugh at such a ritual and its attendant beliefs surprised me.  Those same colleagues would never laugh at the idea that God wrote the Torah (even if not all of them believe that) or at the idea that God answers prayers (even though I’m sure many of them struggle with that idea too).  But the belief in ancestors who could intercede on behalf of their relatives was alien enough to be funny.  This caused me to notice that the contemporary spirit world, for some Jews, is rather empty.  It contains an abstract God, and no one else.

Yet for our Jewish ancestors, the spirit world was far more multiple.  In the Bible, ancestors went to an underworld called She’ol.[1]  In the rabbinic era (3rd century CE) and beyond, there were souls who might be sitting under a tree in the Garden of Eden, resting in a storehouse under the Divine Throne,[2] or wandering the world in the form of a dybbuk, or a disembodied spirit looking for a body to possess.  It was even possible, according to kabbalists, to have an ibbur, a “pregnancy” in which the soul of an ancestor benignly shared space in someone’s body.[3]  In modern times, Susan Sered, an anthropologist of contemporary Jewish women’s practice, writes about how Yemenite and Kurdish Jewish women in Jerusalem would go to the cemetery daily to communicate with the ancestors.[4]  The novel The Dybbuk, by S. Ansky, mentions a bride visiting the cemetery to invite deceased parents to a wedding.

Angels and demons also walked the worlds.  Angels appeared in a variety of biblical stories, interacting with human beings.  In the Book of Enoch (circa 300 BCE) and in later Jewish literature, there were angels with a variety of complex names: Ilaniel watched over fruit trees, Raphael was in charge of healing, Metatron was the celestial scribe.  In the Talmudic era and beyond, demons abounded— the sage Abaye claimed that there were far more demons in the world than humans, so many that they rubbed against the sages’ clothing and wore them out.[5]  Stories told of rabbis outwitting demons who lived in abandoned synagogue. Women and children wore amulets against the demon Lilith who stole babies and the seed of sleeping men.[6] Genesis Rabbah, an ancient rabbinic collection of midrash, notes the existence of field spirits and house spirits, and wonders which of these two species is more benign and which is more dangerous.[7] The Zohar, a kabbalistic work of 13th century Spain, speaks of souls meeting in the graveyard on an autumn night during Sukkot. Isaac Luria, the great kabbalist of 16th century Sfat, would point out the spirits of ancestors as he walked with his followers through a graveyard, and Joseph Caro, the great scholar of Jewish law, regularly visited with an angel.[8]  Much more recently, Yiddish storytellers spoke of the shretele, the house-spirit who cared for the family, and the kapelyushnik, the cap-wearers (elves) who made mischief.[9]  Sephardic women’s practices also affirmed the existence of spirits, and Sephardic healing rituals propitiated these spirits via a process called “sweetening.”[10]

I have the sense that Jewish women of previous generations, who tended the home and the community, had a multiple and complex spirit world to negotiate.  Rituals like the making of soul candles, or the “sweetening of spirits,” were acknowledgements of this rich and multiple metaphysics. In other words, the spirit world of our mothers was not empty except for God.  It was quite crowded, in fact.  The Divine presided over an “otherworld” (in Yiddish, die yenne velt) that was complex and required attention and negotiation.

Where did all of these beings go?  The Enlightenment and the advent of scientific ways of knowing brought a shift for many Jews, particularly those who came to America and shed many beliefs and practices.  The theology of American Jews abandoned the multiplicity of the spirit world, retaining only the biggest figure in it (God)—and sometimes, not even that.

Yet to see the spirit world as a multiplicity may reflect a genuine experience of metaphysical reality as a community rather than a single entity.  This “community of being” is something we may feel as we walk through a forest or flip through a family album, or stand on an ancient site.  This sense of a multiple spirit world also reflects our sense of the many energies that impact us throughout a day and throughout our lives: the presence and feelings of those around us, the diversity of the natural world, and more.  While many of us are intimate with a deep oneness that we may call God or Spirit or Cosmos, the more personal and individual variations of the All are something we may also sense.

The Kohenet Hebrew Priestess Institute, which I co-founded, meets several times a year to train Jewish women in spiritual leadership practices.  At our most recent retreat, held at the Isabella Freedman Jewish Retreat Center, we discussed the spiritual practice of “guardianship”—shemirah, in Hebrew—watching over someone or something to provide spiritual protection.  This practice is done, for example, for the bodies of loved ones waiting to be buried, and it was also done for vulnerable newborns.[11] We connected the practice of guardianship to the Levites, who stood guard over the Temple with ritual weapons, and to the biblical figure of the gevirah, the queen mother who watches over vulnerable children until they are ready to come of age.  As we discussed the uses of ritual guardians, we began to also discuss how guardian practices reflected our ancestors’ sense of a spirit world populated by many beings of varying levels of benevolence.  It became clear that the whole idea of shemirah implied a multiple, rather than a singular, spirit world.

Earlier that week, as I was placing a ritual object my father (of blessed memory) had made for the use of the Kohenet community, a crow sat in a nearby tree, calling.  There had also been a crow on the day I went to view his body, and also crows came to his funeral.  For me, the crow in the tree was my father, making his presence known, watching over me as I did my work. As the crow cawed, I felt much less lonely. In that moment, I was grateful for the multiplicity of my spirit world.

[11] See for example the Jewish Encyclopedia’s article on the practice of wachnacht: http://www.jewishencyclopedia.com/articles/14743-wachnacht

Like Loading...
‹ We All Come From Stardust by Judith Shaw
The Practices of Forgiveness and Yoga by Vanessa Soriano ›