My life’s work with traditional women’s circle dances of Eastern Europe and the Near East has been a natural interweaving of feminism, activism and Goddess spirituality. In more than thirty years of experience, my students and I have gained valuable insight into their potential as tools for healing and transformation.

These simple and ancient dances connect us with women’s ritual practices from the past which are rooted in a Goddess-reverent paradigm honouring the earth, the body and the female face of the divine. In the present day, the practice of mindfully dancing traditional circle dances which embody this worldview can help us imagine and create a more equitable society in the future.

Circles of women dancing with joined hands appear in rock art, pottery shards, vases and frescoes going back thousands of years,[i] showing that ritual dance was a primary means of women’s worship. (See Max Dashu’s collection of images here.) I believe that existing women’s circle dance traditions of the Balkans are direct descendants of these ancient rituals. In their expression of values of partnership, sustainability, and peace, they are living links to the matrifocal Goddess culture of Old Europe as articulated by archaeologist Marija Gimbutas.[ii] 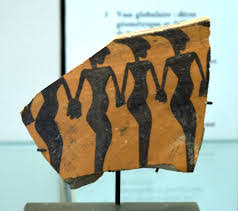 In researching the roots of women’s dances, I developed a fourfold method, looking for continuity of motif in 1) the archaeological and historical record; 2) the dance patterns themselves; 3) woven and embroidered textiles; and 4) dance songs, fairy tales and related verbal (yet non-linear) texts. The often striking similarity of pattern in all four areas, in my view, is not a product of coincidence. [iii]

The main motif which emerges, again and again, from this archaeological approach to the dances is of course the Goddess, whose image is embroidered and woven into the costumes women wear when they dance.[iv] She is hidden in jewelry, in song words, and in the patterns of the dances – which I believe serve as a wordless mantra, a silent invocation and affirmation of the power of the Goddess. Other symbols of the Goddess – spiral, snake, circle, butterfly, double ax, zigzag and Tree of Life – are abundant and distinctly emphasized in the dances, costumes, stories and songs.

These symbols have been carefully passed down through many generations precisely because they carry meaning. At the end of the 4th century CE, when the emperor Theodosius ordered the destruction of the pagan temples, ritual practices honouring the Goddess did not all disappear; many practices simply went underground, disguised in apparently innocuous forms (textiles, songs, dances, and fairy tales) which could be smuggled safely through centuries of patriarchy. All of these intertwined motifs together form an unwritten language which goes back to Neolithic times.

In the words of Jean Shinoda Bolen, in her book The Millionth Circle, ‘poetic imagery is compressed information;’[v] I believe that dance steps, song texts and embroidery patterns can all be ‘read’ as women’s poetry, carriers of a legacy of ‘compressed’ women’s wisdom which has lasted until the present day. This secret language survived better in Eastern Europe and the Balkans partly because there was no mass witch-burning under the Orthodox Church (though women were oppressed in other ways). The survival of similar motifs and symbols in the embroideries, dances and fairy tales of Western and Northern Europe, shows that ancestors from this region too also once shared this hidden language.

The main messages of the women’s dance language are simple: everyone is welcome in the circle; you are never too old to dance; leadership must be shared; the body is the home of joy; connection with others is essential. The dances help us develop patience, awareness, stamina, balance and support, while the visual and kinesthetic unity of the circle replaces competition and discord with cooperation and harmony. They teach us when to conserve energy and when to release it, when to yield and when to make a stand. Participants in my workshops all over the world describe how the dances connect them with a flow of energy in the circle and the body, waxing and waning like the cycles of ‘life, death, and rebirth energy in nature and culture,’ which Carol P. Christ identifies as one of the key gifts which the Goddess can offer women today.[vi]

(Excerpted from my essay ‘Women’s Ritual Dances: Secret Language of the Goddess’ in She Rises! Vol. 2: How Goddess Feminism, Activism, and Spirituality? Mago Books 2016, pp. 311-322. www.magobooks.com)

[i] Garfinkel, Yosef. Dancing at the Dawn Of Agriculture. Austin: University of Texas Press, 2003, p. 3.

Like Loading...
‹ Find Your Warrior Archetype, Sisters: We are in the Fight of our Lives by Trelawney Grenfell-Muir
Seeking Enlightenment? Let’s Try Endarkenment by Barbara Ardinger ›