Home › Death › We Are Not Alone: Embodying and Re-enacting Ancient Wisdom by Carol P. Christ

We Are Not Alone: Embodying and Re-enacting Ancient Wisdom by Carol P. Christ

A few nights ago, on the way to dinner, two friends and I passed by a small church near the old fortress in Ierapetra, Crete. The liturgy was broadcast via microphone and a crowd of people gathered outside the church. “Must be some kind of name day,” one of my friends commented, but I could not think of a saint celebrated on August 1.

We decided to light candles and make our prayers. I asked one of the Greek women the reason for the ceremony. “This is the first night of our celebrations for the Panagia,” she responded, referring to the Assumption of Mary that would occur on August 15. I looked around and saw that indeed many of the women were wearing black. “Of course,” I thought to myself.

“Women named Maria and Panagiota will wear black for the first two weeks of August,” I explained to my friends. “They will be joined by other women who have made special prayers to the Panagia for healing and health or for other assistance in their lives.” The reason they wear black is to announce to each other that they share the suffering of Mary the Mother of God who lies on her deathbed during these days. 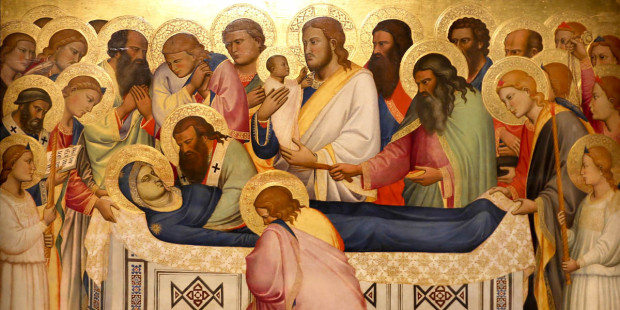 The next morning I thought about at the ways of women who continue traditions more ancient than even they know. The hot days of August are the death time in Greece and this is the time when the Greater Mysteries associated with Demeter and Persephone at Eleusis were celebrated. The liturgy being blasted from the microphone may have been written by men, but the customs of the women, including wearing black and praying for themselves and their families, were not decreed by any male authority.

They are simply doing what women have always done. They do not do it alone. They do it together. Could this in fact be the greatest “mystery” of all:

that we are never alone,

that all of our sorrows are shared,

that no one escapes death,

that death is not final,

because the cycles of birth, death, and regeneration continue.

This ancient wisdom has a special poignancy in our times. Our generations are not the first to fear that ours will be the last. But we may be the first to have scientific evidence of species extinction–including the possibility that our species may be among them. Can we still believe in the cycles of birth, death, and regeneration? Maybe we can, if we take a longer view. Even if most of the species we know are lost, our planet can begin the long slow process of evolution once again.

Last night while we were awaiting our dinner, someone at another table stood up, cried out, and pointed a camera toward the sea. A small caretta caretta, a young member of the giant sea turtle species, was swimming around, right below us. The others had seen its head, and as it came closer we could see the golden image of its body glimmering beneath the water. He–or was it she–swam back and forth along the seawall for more than an hour. Eventually I caught a glimpse of a head and later of two webbed feet above the water.

In the morning I read that after it was discovered that sea turtles had begun laying eggs in Ierapetra, the mayor took the first steps to protect them last year.

Caretta caretta is an endangered species, but it wants to live. Maybe it will not survive the current great extinction. Turtles survived the extinction that killed the dinosaurs sixty million years ago. They began their evolutionary journeys more than two hundred million years ago. Turtles have lived a very long time.

Can we, should we, take hope in the knowledge that even if many species will not survive, the evolutionary process will continue as long as there is light from our sun? And can we–like the women who came before us–find ways to embody the knowledge that we are not alone, no matter what form grief takes in our individual lives?

Also see: Shadows of the Goddess in Greek Orthodox Tradition

Carol P. Christ is an internationally known feminist and ecofeminist writer, activist, and educator currently living in Pachia Ammos, Crete. Carol’s recent book written with Judith Plaskow, Goddess and God in the World: Conversations in Embodied Theology, is on Amazon. A Serpentine Path: Mysteries of the Goddess is on sale for $9.99 on Amazon. Carol has been leading Goddess Pilgrimage to Crete for over twenty years: join her in Crete. Carol’s photo by Michael Honneger.

Two spaces have unexpectedly become available on the fall 2019 Goddess Pilgrimage to Crete. Do you want one of them? Act quickly!

Like Loading...
‹ Eye of Newt, a Binding Spell by Barbara Ardinger
Soulful Art in New York City by Judith Shaw ›