Home › Childhood › Child of the Earth by Elizabeth Cunningham

Child of the Earth by Elizabeth Cunningham

I have a vivid childhood memory of being sick with the stomach flu and standing in the doorway of my parents’ bedroom looking for my mother. Her care for sick children was tender and thorough. She would bring us ginger ale and toast with jelly. When she had time, she read us stories. I can remember her steering me, heavy with fever, back to a bed that she had magically smoothed and cooled. But that day my mother lay in her own bed in an old nightgown, not stirring. She had the flu, too, and could not get up to care for the rest of us. It was a shocking and sobering moment.

As I grew older, I transferred my need for comfort, reliability, and continuity from my mother to the earth, the sure turning of the seasons, beloved trees, waters, and rocks.  As a young mother, I looked forward to sharing my own childhood joys with my children, among them jumping into autumn leaf piles. The first time my children leaped into a leaf pile, they came up covered with the ticks that have now made my region the epicenter of Lyme and other tick-borne diseases. Nor was I able to share with my children the joy of drinking water straight from a stream. 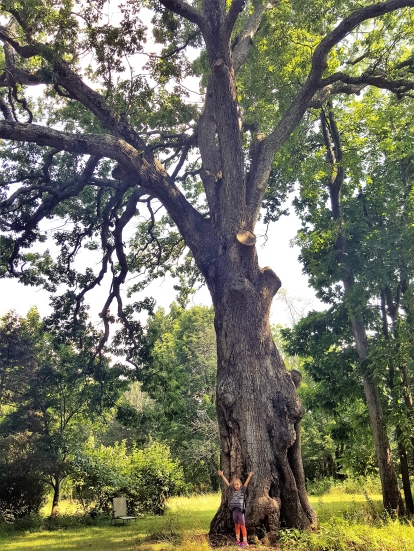 Vera under the Oak by Barbara Upton

During a bout with Lyme disease, I pondered the biblical Job’s declaration after God visited him with various afflictions: “Though he slay me…I will cling to him.” I decided would go on clinging, so to speak, to the earth, the source of all life, comfort and wonder. I would take precautions against ticks but remain as close to the earth as possible in the garden and in the wild.

But the earth is not slaying us as a test or as a punishment, unlike Job who is set up for suffering by a wager between God and the Adversary. We are wounding the earth. Many times I hear people say, “Oh, we may do ourselves in, but the earth will go on.” That may be true in some long run we will not live to see. But right now, we are not only hurting ourselves. A million other animals and plants face extinction due global warming and the harm done to rivers and ocean, ground water, soil, air, forests.

Another memory of my mother. Being a visiting adult child at her dinner table with extended family. If anyone appeared to be looking for anything, she jumped up, “What do you need?” she would ask, tense with tamped down anger. My mother, for reasons both personal and cultural, invested her whole identity in meeting the needs of others while ignoring her own—not even feeling entitled to have needs.

As a counselor, I have clients, almost always women, who have difficulty setting and knowing their limits. Sometimes I say to them: people treat women the way they treat the earth, as if we are limitless, ever-giving, needing nothing, just there to supply what people often don’t even acknowledge they’re demanding. (Or to put if more strongly, who can be raped and abused with impunity.) When you stand up for yourself, consider that you are also standing up for the earth.

(Note: It is not only women who are treated this way in patriarchal capitalism—a topic beyond the scope of this post—but farm workers, domestic workers, factory workers, anyone in a service position.)

Some of my happiest memories of my mother are moments when she allowed me to give back. I would bring her afternoon coffee. I took pleasure in her pleasure. I am happy now when my flower gardens host bees, butterflies and other pollinators, when the once-lawn-now-meadow is full of milkweed and other wildflowers. There have been, and still are, many cultures where giving back to the earth is a way of life. Though we are in ecological crisis, it is not too late for people everywhere to pay attention to the earth and ask, “what do you need, what can I give? How and where shall we live that respects the lives of other beings on earth?” It is not too late to love the earth, not too late to learn that we are not separate from the earth.

This year I became aware of how I still crave the comfort of the apparently unchanging. For the seven years I’ve lived in my current home, I’d wake and gaze out my window, tracing the twisting branches of a three-hundred year old white oak. Every day I would stand beneath the tree, feel rooted among its roots, know the comfort of being so small and young beside its ancient being.

And then, one day last spring, right before my eyes, the huge old oak fell. There’d been a week of rain and the tree, sending water to the baby leaves, was too top heavy to go on standing. I visit the fallen tree every day, and I know life goes on around it and is even now nourished by it. Still I miss the living, standing tree. I miss my human mother. I miss the seeming predictability of the seasons in my childhood. I am comforted by nearby rock formations, but I remind myself, they were formed by cataclysm. They are changing, too, just more slowly than what I call myself, a child of the earth.

I close with a passage from my novel Magdalen Rising:

It’s not all pretty. The earth knows terrible things. She receives all deaths, gentle and brutal. She bears the pain of every birth. She turns all things back into herself; she worries the bones to dust. She is changing, always changing. Layers shift. Her own bones crash and break. Tides heave. Rock erupts into fire. It’s not all pretty. Beauty never is.

Elizabeth Cunningham is best known as the author of The Maeve Chronicles, a series of award winning novels featuring a feisty Celtic Magdalen. Her novels The Wild Mother and The Return of the Goddess have both been released in 25th anniversary editions. She is also the author of Murder at the Rummage Sale. The sequel, All the Perils of this Night, was published in August, 2020. An interfaith minister, Cunningham is in private practice as a counselor. She is also a fellow emeritus of Black Earth Institute.

Like Loading...
‹ Wisdom from our Ancient Female Lawgiver and Judge Traditions by Carolyn Lee Boyd
Matriarchal Manifesta by Heide Goettner-Abendroth ›