The Mask and the Mirror – Part 2 by Sara Wright

When I asked Debra about this circle she said “the circle around the eye is symbolic of the moon, a nightly ritual of seeing the moon.”  Curiously, women as ‘seers’ have an intimate relationship with the moon. Both eyes seem to be able to stare directly through the mask. The woman’s lips are parted; she is breathing but there is no sense that she is about to speak.

The length of the woman’s neck is accentuated by its distinct slate blue tones. This neck seems especially vulnerable – stretched perhaps to endurance. Suddenly it occurs to me that it is also a neck, like a chicken’s neck, that is ready for the chopping block. Has this woman lost her voice? Her ability to breathe? Is there a threat of being separated from her body? The suggestion of a body ends at the woman’s shoulders so we are left wondering…

Since our feelings and emotions reside in our bodies the suggestion here is that this woman may be without access to her body on an instinctual level. If so she is unable to protect herself. Blue is a color that is sometimes associated with death. In some Native traditions, like that of the Zuni and the Lakota Sioux blue is the color of the Underworld. Particularly touching is the pale four petaled flower to the lower right of the left half of the relief, a flower without a stem or root, or is this a wheel of some kind, one that is in motion – whirling – chaos? To my mind a number of aspects of this portrayal speak to the presence of death.

And yet below the flower the somber tones lighten to cream and ivory and a pale yellow round emerges at the bottom center of the relief. With the blurring of boundaries the upper split vanishes as light begins to permeate both sides of the bottom of the piece. Also missing is the suggestion of separation between the two halves that ends at the bottom of the woman’s blue neck. In this lower half we see an opening into the right side of the relief. Light is penetrating the darkness.

One way to read this shift is to see this opening occurring unconsciously; in the realm of the unconscious there are no ego boundaries to separate parts of the self. Everything is interconnected. Just above the ivory light is a small white moon – like circle, still caught in the dark, symbolizing the presence of the moon/unconscious contents; and then almost instantly we are drawn into the image of a huge brown standing bear who contains not just the head but the torso of the anonymous woman, a woman without either arms or legs. The details of this magnificent animal are well defined; and the giant bear is holding the woman lovingly in his embrace. That he is a male bear seems to be suggested by the presence of genitalia.

This is a Brown bear; and these bears weigh up to about 1000 lbs. Brown bears or grizzlies are reputed to be fearsome and destructive animals, but anyone that has ever studied them from a naturalist’s, bear biologist’s, or ethological standpoint knows that these astonishingly intelligent animals are not vicious animals. They are however, fear driven and terrified of humans because they have been hunted almost to extinction by man. In their terror they may moan piteously or huff, snort, and slap the ground in what seems to be a threatening way when encountering a human. If approached, most will run. If bears are treated with respect and given adequate space the majority of these animals leave people alone (see Bradshaw’s compelling narrative about Charlie Russell’s life with grizzlies that reads like a novel – Talking with Bears).

From an Indigenous perspective bears were and remain the most powerful animal healers of body, mind, soul and spirit. They are repeatedly invoked through complex rituals like the Navajo Mountainway Chant. To have a grizzly bear as a protector is the most powerful medicine of all.

Bears are also associated with the unconscious instinctual, untamed side of being human according to most Jungian scholars, although Brown bears are considered to be dangerous instincts by these same psychologists (European in origin).

I would posit that Debra knows the truth about Brown bears.

Now let’s return to the woman in the left side of the relief; the woman with only a suggestion of a body. This woman has lost contact with her instincts, but only temporarily as it turns out.

When ‘Everywoman’ re-emerges from the unconscious on the right side of the round she is held in the arms of the bear, ‘Our Great Protector’, a part of ourselves that is the author of our feelings and emotions, our instincts and inner truth, all of which are stored in our bodies. Under the bear’s protection we can return to our whole selves and mediate our fears.

The woman’s face and torso are lacking both arms and legs, appendages that help us to take action to change the direction our lives are taking – reiterating the lack of power women have to deal with this virus – or to change or control other outcomes. We may not be able to shift the outcome of a virus that humans created and must begin to take responsibility for, but we can help ourselves and those we love by listening carefully to our bodies, and allowing our instincts to guide us. 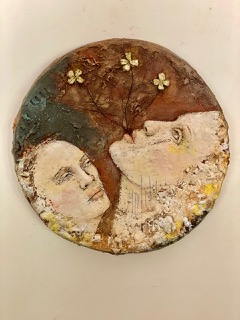 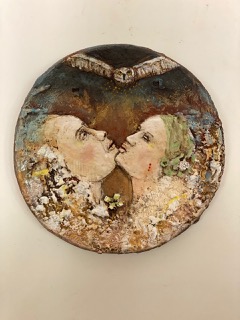 Sara is a naturalist, ethologist (a person who studies animals in their natural habitats) (former) Jungian Pattern Analyst, and a writer. She publishes her work regularly in a number of different venues and is presently living in Maine.