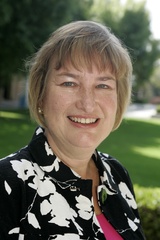 The following is a guest post written by Helen Slessarev-Jamir, Ph.D., Mildred M. Hutchinson Professor of Urban Studies at Claremont School of Theology.  Her research focuses on the character of religiously inspired justice work in response to globalization and American empire.  Helene is a member of the Board of Directors and writes for Sojourners; she has authored multiple articles and books including most recently published Prophetic Activism: Progressive Religious Justice Movements in Contemporary America.

Today my son Stephan celebrates his 31st birthday. In the year Stephan was born he was one of very few bi-racial children in the U.S. I personally knew of no one else who had a bi-racial child. His father and I agreed that given the racial realities of the U.S. in 1980, he needed to be raised as an African-American because that was how he would be perceived. We consciously constructed Stephan’s identity as black.

We lived on the Southside of Chicago in an all-black neighborhood. Yet, when he was ready to enter elementary school, I was advised to register him as “white” so that he would have a better chance of being admitted into the local public magnet school. Having resisted any significant plans to desegregate its public schools, the Chicago Board of Education used racial diversity as one of the main criteria for admission into their magnet schools. As a result, Stephan became one of the “white” children in his 1st grade classroom even though all the faces in his school photo were varying shades of brown.

In his daily life, Stephan grew up as an urban black kid. As his mother, I indirectly experienced what it meant to be treated as a black male in America. I distinctly remember how store clerks began to treat him with suspicion when we went into department stores to buy his school clothes.

He was 15 the first time he got picked up by the Chicago Police. At the time it was legal for the police to arrest juveniles whenever they were in groups of three or more. The U.S. Supreme Court would later strike down that law as unconstitutional. Even his African-American teachers tended to have fairly low expectations of their male students – when I complained about in the incongruity between his very high test scores and his mediocre grades, his principal told me, “Some black boys are just like that.”

For many years Stephan struggled with his identity because in reality he was neither completely African-American nor white, yet at the time those were the only racial categories available. After his father left when he was seven, Stephan was in the unenviable position of living in a black neighborhood with his white mom. In response, he invented black fathers. Once in anger he yelled at me, saying, “Why can’t you be just like all the other moms!”

Shortly before his 17th birthday, he came to me in the middle of the night and told me he needed to get out of the neighborhood because someone was threatening him. I put him on a plane to his grandmother in California and then used my white privilege to move us both out to the suburbs. Stephan spent his last year of high school in an almost all white suburban school where teachers and administrators assumed that since he was black and came from Chicago he must be a gang-banger.

Things are different now. This spring I realized that the majority of my colleagues’ young children were bi-racial. In the last 30 years there has been demographic sea change in the U.S. According to the 2010 census there has been an almost 50 percent increase in the number of bi-racial children since 2000 while the number of people who identified themselves as both black and white soared by 134 percent.

According to William Frey, a nationally known demographer, over the last ten years, this country’s population of white children declined by 4.3 million while the number of Asian and Hispanic children grew by 5.5 million. There are now 10 states in which children of color are now the majority and another 12 in which they constitute 40% of the under 18 population.

While I celebrate these demographic shifts, I wonder, do they make any difference for the “Stephans” growing up today? Will mixed race children and children of color have it any easier than he did?

Maybe, if they’re from upper-middle-class families. However, the increase in the number of children below the poverty line and the concerted efforts to shrink the size and scope of government, combined with an increasingly widespread hostility towards immigrants, seems to actually be making it worse for children of color.

A Sept. 8, 2011 editorial in the Los Angeles Times suggests that the voracity of our current political debates may represent an emerging political divide between aging whites and an emerging brown majority. Resulting budget cuts are already falling most heavily on children and young adults. Many states have already made deep cuts in state spending on public education ranging from pre-school and kindergarten all the way to public universities. A handful of states have also enacted onerous restrictions on undocumented immigrants, which inevitably hurt the well-being of their children.

As the U.S. undergoes the shift to becoming a brown skinned nation, there is an urgent need to acknowledge the continued salience of race in shaping American politics. As has so often been the case, race is still not a topic many whites are willing to openly discuss, yet it continues to shape the way we view the world and the value we place on the well-being of others. How we address this critical issue as we go forward will make a big difference in whether or not the majority of our next generation grows up educated, affirmed, and productive.

Like Loading...
‹ The Scars Were Not Me: Gilligan and Self-Care By Drew Baker
Women Standing as Sacred Witness to One Another By Stacia Guzzo ›