Home › Race and Ethnicity › Asian American › “Passing” for White to Get Into Harvard? By Grace Yia-Hei Kao

“Passing” for White to Get Into Harvard? By Grace Yia-Hei Kao

“[G]rowing numbers of Asian Americans are not taking a ‘wait and see’ approach about whether elite colleges are discriminating against Asian Americans on account of their race, but have been acting under the assumption that they have been and still are.”

Asian Americans and Harvard University have been in the news and on my mind recently. The bigger story has been about the “Linsanity” surrounding (Harvard grad) New York Knicks player Jeremy Lin who continues to take the NBA by storm.

The smaller story, though one that also made national headlines in early February, is of the recent decision by the Education Department’s Office for Civil Rights to investigate a complaint that Harvard and Princeton Universities discriminate against Asian Americans in admissions.

According to Daniel Golden of the Bloomberg News who first broke the story:

“Like Jews in the first half of the 20th century, who faced quotas at Harvard, Princeton, and other Ivy League schools, Asian-Americans are over-represented at top universities relative to their population, yet must meet a higher standard than other applicants based on measures such as test scores and high school grades, according to several academic studies.”

In one widely-reported study, Princeton sociologist Thomas Espenshade reviewed data at ten elite colleges in his co-authored book No Longer Separate, Not Yet Equal: Race and Class in Elite College Admission and Campus Life. He found that Asian Americans must score 140 more points than whites, 270 points more than Hispanics, and 450 points more than African Americans out of a maximum of 1600 on the math and reading sections of the SAT to have the same chance of admissions at elite colleges.

To be sure, these and other findings of test score disparities are not sufficient to establish that these schools are in fact discriminating against Asian Americans in a way that would violate civil rights laws. Indeed, since official statistics from the College Board have long revealed that Asian Americans have the highest SAT scores of any racial group, we should not be surprised that Asian Americans as a group at top institutions have been outscoring their white (and other) counterparts on the SATs.

Not surprisingly, officials at both Harvard and Princeton have denied that they discriminate against Asian American applicants. They’ve each reiterated how competitive their respective admissions process is and affirmed that every applicant is assessed “holistically” on a “case-by-case” basis as they take into account a variety of factors.

I’ll leave it to the Office for Civil Rights to complete its investigation before I render judgment on the existence of any such “Asian [glass] ceiling” or quota. In the interest of full disclosure, I should note that I am an alumnus of Harvard University (Ph.D. 2003) who has since Fall 2011 been volunteering my time interviewing applicants for undergraduate admissions to the College. Still, my interest in withholding judgment until the facts come in has more to do with prudence, in a “boy who cried wolf” kind of way, than any desire to avoid tarnishing Harvard’s (or Princeton’s) reputation.

Acting “As If” Discrimination Exists

What I’ve discovered since that story first broke is that growing numbers of Asian Americans are not taking a “wait and see” approach about whether elite colleges are discriminating against Asian Americans on account of their race, but have been acting under the assumption that they have been and still are.

There have been multiple stories, articles, and blogs about a rising trend among unknown numbers of Asian American applicants suppressing their racial identity. A Dec. 4, 2011 Associated Press article entitled “Some Asians’ College Strategy: Don’t check ‘Asian,’” noted that some believe so strongly that the “system” is rigged against them (i.e., in favoring other racial-ethnic minorities and even whites over them) that they are either “declining to state” their race, or are only checking the “white” box if they have one Asian parent and if their first or last names don’t give away their Asian heritage. James Chen of The American Thinker has noted that Chinese American applicants with “ethnically ambiguous surnames such as ‘Young’ or ‘Shaw’ or adoptees from Asia” might increase their chances for admission “merely by rendering hazy their ethnic origins.” He adds that native-born Filipino Americans who pursue a similar strategy would even have a “greater admissions advantage, as their Spanish surnames may mislead college admissions offices into believing that they are Hispanic.” 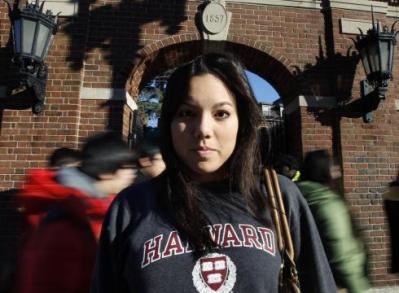 This half-Taiwanese, half-Norwegian Harvard frosh declined to indicate her multiracial heritage “because [her] mom told [her] there’s discrimination against Asians in the application process.”

“Passing” for the Sake of College Admissions?

I have had multiple layers of reactions to these stories. Initially, I imaginatively placed myself back into my high school senior self and thought that I could not even have fathomed concealing my Taiwanese American heritage as a college applications strategy. It’s not just that I could never have gotten away with it—as a name like “Grace Yia-Hei Kao” doesn’t exactly scream either ethnic ambiguity or Caucasian—it’s that it would have felt so desperate, dishonest, and disrespectful to my parents to have done so.

So in those first moments, I was simply aghast that friends, parents, and even high school guidance counselors (if these blogs and articles are to believed) are apparently now encouraging some high schoolers either to avoid disclosing their Asian racial-ethnic identities or attempt to “pass” as white for the purposes of admissions. I also wanted to know what else Asian kids are being encouraged to do. Explicitly ask their teachers to avoid mentioning their race or ethnicity in their letters of recommendation? Hide their leadership in any race- or ethnic-specific activities or organizations? Better yet, avoid getting involved in them in the first place so that no one would have to lie (e.g., in my case, that would have involved switching to a white church instead of the Taiwanese American one in which I was raised)?

After realizing that I had applied to college more than twenty years ago and that admissions to top colleges have since become even more selective, my next thoughts quickly turned to my two hapa (i.e., half-Asian) boys (ages 2 and 4). Still, my horror didn’t abate.

Instead, I became pained at the prospect of them trying to “pass” as white for any real or perceived competitive gain. Both my husband and I don’t want our children to go to a top college (or to any college, for that matter) if that means that they must lie (by omission) about who they really are in order to get in.

In fact, my husband and I deliberately gave our boys Chinese middle names so that they would be recognized even on paper as Taiwanese/Chinese and so they couldn’t be mistaken as only white. To be clear, they have English first and last names (Preston Walker and Keenan Walker), but everyone regularly calls them by their nicknames—“PJ” (which stands for Preston Jia-Ying) and “KC” (which stands for Keenan Chuan-Sheng). We figured that even if PJ and KC someday tell others to call them by their (formal) first names, they would still have spent a lifetime explaining to their peers what the “J” or “C” in their nicknames, respectively, stands for and means.

There is much more that I could say about this topic. I’ll close by reiterating the feelings of sadness and shock I still feel about this all and then by commenting upon one more emotion I have—relief—that I’m surrounded by family and friends who would never pressure my boys to deny who they really are racially out of any (mistaken or real) prospect of competitive gain.

Grace Yia-Hei Kao is Associate Professor of Ethics at Claremont School of Theology. She is the author of Grounding Human Rights in a Pluralist World (Georgetown University Press, 2011) and is working on a second book manuscript on Asian American Christian Ethics. Read more about her work on her website.

This blog is cross-posted at Taiwanese American.org and an earlier version appeared in SUBTLE magazine.

Like Loading...
‹ Bareed Mista3jil: Negotiating Gender, Sexuality, and Religion in Lebanon by Amy Levin
Navigating the Academy with an Accent by Amanda Pumphrey ›