A Family Conceived, Lost, and Resurrected by Gina Messina-Dysert 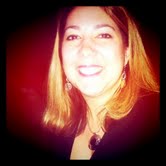 As I had written about in a previous post, my husband and I had a very long struggle with infertility.  After nine years, multiple failed rounds of infertility treatments, and much heartache, we decided to look at alternative options to grow our family.  Once we had made the decision to adopt, I felt new hope.  There was a light at the end of the tunnel and I knew a child would be coming home to us before long.  I had a dream that Mary, the mother of Jesus, had come to me and told me that I would be a mother.  She promised that a child was waiting that needed our love and would arrive soon.  I began praying to a shrine of Mary at a local parish near my home; she became my source of strength and solace.

Not long after we had been approved for the adoption waiting list, we took a family trip to Italy to visit my father’s hometown and meet our relatives.  It was quite an adventure and during our excursion I stopped in every church we passed to say a prayer to Mary.  Half way through the trip we received a call that a child had been matched with us.  To say we were overjoyed would be a complete understatement.  We tried to catch an earlier flight home but were unable.  A once in a lifetime trip to Italy was suddenly of no interest to us as we sat around our hotel room looking at baby items, reading parenting info, and preparing for the homecoming of our first child. 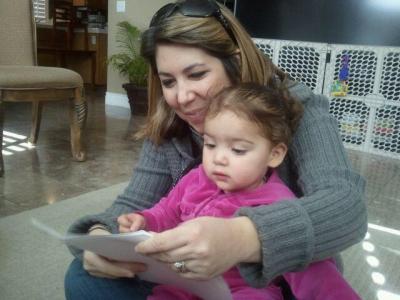 Mommy and Baby S meet for the first time.

I met my daughter – Baby S – for the first time in January, 2011.  She was 20 months old and from the moment I saw her, I knew we were destined to be together.  I had been terrified on our way to meet her wondering what she would be like.  Would she like me? Love me?  Would she accept me as her mother?  When we entered her foster home and I came around the corner, we locked eyes as she ran toward me giggling; I picked her up and we embraced and I instantly fell in love.  She was the child Mary had promised me.

After our daughter had been home with us for about a month, we were notified that there was a problem with our adoption.  A biological relative had hired an attorney and was seeking custody.  It was an incredible shock; we were frightened and found that we had no rights in the process because we were considered foster parents until the adoption was finalized.  After three months of having our daughter home a court ruled that she had been placed with us in error.  Baby S was taken from our custody and our world crashed around us.

The grief we felt was unbearable and I questioned what kind of God would be so cruel.  Our family was lost, as was our dream of being parents.  I had given up on motherhood; after losing Baby S I could not imagine bringing another child into our home.

Five months passed when we received the unexpected and unbelievable call from our adoption worker that the relative was no longer able to care for Baby S; she had asked that Baby S be returned to our care.  It was a miracle, our daughter was coming home to us.

From the time we received the call until Baby S came home, nearly three weeks had passed.  Again, I was worried about seeing her for the first time.  How difficult would it be for her to move again?  What had her life been like for five months?  Would she accept us as her parents?  When she finally arrived Baby S walked into our home and into my arms.  Our connection had never faded.  She was my daughter.  Mary had known it, and at that moment, I knew it. 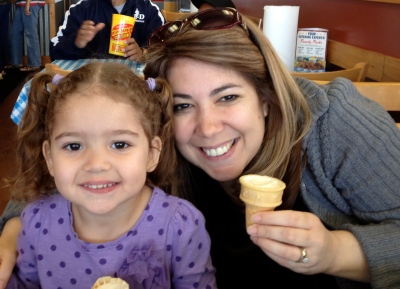 Baby S has been home for a little over six months now.  She has changed our lives in so many ways and every day we wake up thankful to be her parents.  While the grief we endured was unspeakable, the end result was worthy.  I have come to know Baby S’s biological family well.  They are wonderful people and together we all share a deep love for Baby S and want what is best for her.  We will have an open adoption and Baby S will know her biological relatives, a true gift in so many ways.  Had we not gone through this entire ordeal, we would have never come to know her biological relatives.  I believe Baby S’s life will be better for it, as will ours.

I had been unable to share our wonderful news previously because our adoption was pending.  However, on Good Friday we entered a courtroom with Baby S and our adoption was finalized.  I wept as the judge who had removed Baby S from our custody a year ago stated that it was clear she belonged with us.  It was the moment we had been waiting for; although Mary told me Baby S was destined to be my child, although we have known she is our daughter for sometime, the legal system has finally recognized this as well.  So here, on this Easter Sunday, I am writing to tell you our family has been resurrected. 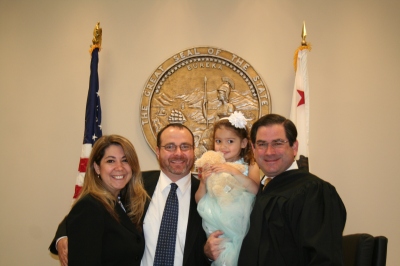 Gina Messina-Dysert, Ph.D.: Feminist theologian, ethicist, and activist, Gina received her Ph.D. in religion at Claremont Graduate University focused in the areas of women’s studies in religion and theology, ethics, and culture.  She is the Visiting Assistant Professor of Theological Ethics at Loyola Marymount University and Co-founder and Co-director of Feminism and Religion. Gina has authored multiple articles, the forthcoming book Rape Culture and Spiritual Violence, and is a contributor to the Rock and Theology project sponsored by the Liturgical Press. Her research interests are theologically and ethically driven, involve a feminist and interdisciplinary approach, and are influenced by her activist roots and experience working with survivors of rape and domestic violence.  Gina can be followed on Twitter @FemTheologian and her website can be accessed at http://ginamessinadysert.com.