Home › Activism › Presumed Guilty by the Sin of Silence: U.S. Nuns, Network, and The Congregation for the Doctrine of the Faith by Cynthia Garrity-Bond

Presumed Guilty by the Sin of Silence: U.S. Nuns, Network, and The Congregation for the Doctrine of the Faith by Cynthia Garrity-Bond 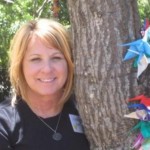 In 1965, the Council document Perfectae Caritatis, Decree on the Adaptation and Renewal of Religious Life, encouraged women religious to situate themselves and their vocations in the social milieu to which they belonged.  Each religious community adjusted rules and customs to accommodate the needs and demands of particular ministerial vocations. For those communities that embraced Perfectae Caritatis entered into a complete paradigm shift in thinking that changed forever how they understood themselves and their chosen vocations. I recall vividly the morning, when, in 1968, Sister Mary DePatzie entered our classroom clad in a shorter habit and dress revealing the startling fact she 1) indeed had brilliant, beautiful red hair; and 2) rather shapely legs even in her sensible shoes.  For  Sandra Schneider, communities of women religious and priest read Perfectae Caritatis through the lenses of Guadium et Spes and Lumen Gentium, which is to say their way of viewing and being in the world no longer took the form of a medieval monastic paradigm. And now, forty years later, those sweeping changes of Vatican II are going under the knife by Pope Benedict and his desire to turn back the hands of time to a medieval paradigm of control over women religious.

Beginning in 2008, the Vatican began its controversial four-part investigation of American nuns that has since taken on the form of a doctrinal inquisition. This apostolic visitation, led by Mother Mary Clare Millea, general of the Apostles of the Sacred Heart of Jesus, 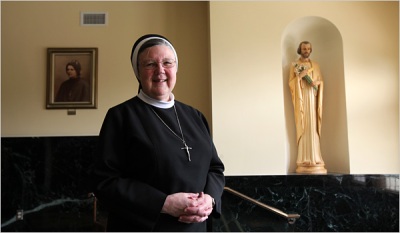 has since become nothing short of a witch-hunt of U.S. nuns. According to recently released findings by the Vatican’s Congregation for the Doctrine of the Faith, or the protector/enforcer of orthodoxy (think here the rubrics of a medieval inquisition) the 59,000 Roman Catholic nuns in the US have been called out for abandoning church doctrine and promoting “radical feminist themes,” such as failure to speak out on same-sex marriage, abortion and the just-won’t-let-it-go American obsession with an all-male priesthood, or women’s ordination. All of which is a classic smoke screen for the Vatican’s attempt of putting the genie back in the bottle, the genie being of course women religious who no longer wear habits, live in convents, and more importantly, entered into academia and other professions that allow them to live out the core gospel values of service to the poor through work in healthcare, religious education and social services.

Singled out by the CDF are the nuns from NETWORK, 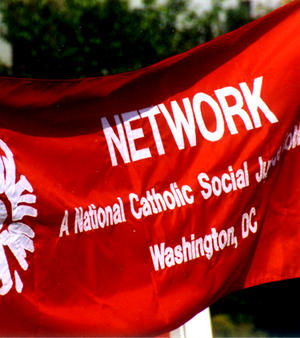 a women-religious led group of lobbyist in Washington D.C., promoting the common good through public policy advocacy from the perspective of the poor.  According to theologian and ethicist Kristin E. Heyer,  author of Prophetic & Public: The Social Witness of U.S. Catholicism, “NETWORK views itself as uniquely representing those at the bottom of the economic ladder (women in particular, because they comprise 70 percent of the world’s poor; immigrants; or those who fall between the cracks) as well as the middle class or those concerned about justice issues” (121). Focusing on Catholic social teachings its lobbying work focuses on five areas of housing: the federal budget (military spending, taxes, campaign finance reform), health care, global trade, aid and debt and economic justice. NETWORK’s approach to how it supports legislation consist of three lenses, 1) Catholic principles with gospel values of supporting the common good; 2) speaking with the poor not for the poor by incorporating their own life experiences; and, drum role please 3) “a ‘feminist/womanist/mujerista perspective’ that ‘promotes mutuality, equality and collaboration’ and values women as contributing members of society; respects ‘the diversity of women’s experience in moving from oppression to liberation,’ and that recognized that the majority of people worldwide living in poverty are women” (122). NETWORK takes seriously its commitment of “radical feminist themes” through its self-understanding of equity among its employees.  All employees earn the same salary, “regardless of length of service, education or experience, or position, in an effort to emphasize that the work that everyone does enhances the achievement of the mission.” (Note 26, page 159)  This counter-culture stance seeks a horizontal relationship whereby the hierarchical model of management with its top-down style is replaced by a collaborative, dialogical even feminist model that envisions the kind of kinship Jesus demonstrated. So, yes, the Vatican is correct when it asserts women religious are guilty of promoting and living out “radical feminist themes” if those themes include solidarity and kinship with the disenfranchised by speaking “with and not for the poor.”

While completing my MA in theological studies I visited NETWORK as part of a larger research project.  In my encounters and interviews I recall asking why NETWORK did not involve itself with issue related to reproductive justice.  While important, NETWORK did not want to entangle itself with issues of a theology below the waist, drawing undue attention from the U.S. bishops or the Vatican that would hinder its legislative endeavors.    Ironic, right?  Because here they are caught in the firestorm of the very controversy they sought to escape.   Stephanie Niedinghaus, spokeswoman for NETWORK speaks about their current scrutiny, “We are so shocked by this action that we’re still putting our thoughts together.  We never expected this and we are deeply grieved for the tens of thousands of sisters who dedicate themselves to social justice work.”

According to the statement of Cardinal William Levada from the Congregation for the Doctrine of the Faith, the intent of the CDF’s findings will bring together the Leadership Conference of Women Religious (LCWR) representing some 59,000 U.S. nuns, with  the CDF.  This Kumbaya fest will “allow for the opportunity to review the document together in a spirit of mutual respect and collaboration, hopefully thereby avoiding possible misunderstandings of the document’s intent and scope.” The surprise factor here is due to the Congregations for the Doctrine of the Faith’s withholding of its findings to the LCWR leadership until its scheduled visit to Rome regarding the doctrinal assessment on April 18 of this year.  According to the National Catholic Reporter, when the leaders came to the meeting, the CDF had already communicated with the U.S. bishops’ conference the appointment of Seattle Archbishop J. Peter Sartain to oversee findings of the apostolic visitation in order to “ implement a process of review and conformity to the teachings and discipline of the church.”  Which is to say, leaders of LCWR were not included in the larger structural arrangement assembled by the Vatican with U.S. bishops to over see and interpret the findings.  Instead Sartain will be in charge of:

In Levada and CDF’s attempt to extend an olive branch to women religious by recognizing their commitment and work to the enactment of the common good through work in communities that included “schools, hospitals and institutions in support of the poor,” they instead stumbled, revealing their own agenda of control and hypocrisy in its deflection away from their own sins of sexual abuse of minors. By focusing on NETWORK and those women religious who live out the gospel values of Jesus, the CDF reveals its own failures and lack of creditability to engage in “mutual respect and collaboration” with those outside its tight testosterone circle. They would do well to inhabit those “radical feminist themes” engaged by U.S. women religious by enacting the Reign of God in real time.

Cynthie Garrity-Bond: Feminist theologian and social ethicist, is completing her doctorate at Claremont Graduate University in women studies in religion, with a secondary focus in theology, ethics and culture. For the past two years Cynthie has been teaching in the department of theological studies at Loyola Marymount University where she completed both her BA and MA in Theology. Her research interests includes feminist sexual theology, historical theology with particular emphasis on religious movements of women, agency and resistance to ecclesial authority, embodiment, Mariology and transnational feminisms. Having recently returned from Southern Africa, Cynthie is researching the decriminalization of prostitution from a theological perspective.

Like Loading...
‹ Feminists Be Silent! Making a Stand in Solidarity with our LGBT Friends Against Bullying and Harassment By Michele Stopera Freyhauf
The Need for a Positive Counter-Narrative of Religious Involvement in Feminism by Ivy Helman ›