Home › Feminism › A Tale of Power and Beauty, Part I: The Queen by Amanda Kieffer

A Tale of Power and Beauty, Part I: The Queen by Amanda Kieffer

A closer look at Snow White and the queen reveals that these women have a common enemy that neither is either willing or able to perceive—the patriarchal lie that a woman’s power is synonymous with youth and beauty.

A couple of weeks ago, to bide some time, I went to see Snow White and the Huntsman, the latest expression of the classic Grimm Brothers tale, “Little Snow White.” Expecting a mediocre experience, I was unprepared for the complex emotions that followed me out of the theater. Don’t misunderstand me: the film was mediocre.  But it also provided some poignant opportunities for me to reflect on my own feminist journey and to ponder some essential feminist themes.  While, Snow White and the Huntsman does offer some acute depictions of the reality of women’s lives, the film as a whole misunderstands these interpersonal dynamics, fails to acknowledge the true source of oppression and, in the end, offers up two lead female characters neither of which is liberating.  One is real but vanquished, the other unreal but victorious.

There are a number of elements in this film, which, in the barest terms, might hint at a genuinely appealing picture of female empowerment.  There is a powerful queen, who even above the male characters is the most complex and sympathetic.  She enjoys vast amounts of power and independence.  In this film we also encounter a Snow White who traipses around in pants and a torn up dress, which is delightfully ambiguous.  She constantly has dirt on her face and under her nails, which is wonderfully un-June Cleaver.  She enjoys a deep and harmonious connection with nature.  She rides into battle like Joan of Arc.  And she is specifically admired for her “defiant spirit.” But defiant toward whom/what?  We must also inquire as to the nature of the queen’s power and why this film spends so much time developing the “villain” over and against the “heroine,” who is exceedingly flat.  A closer look at Snow White and the queen reveals that these women have a common enemy that neither is either willing or able to perceive—the patriarchal lie that a woman’s power is synonymous with youth and beauty. The ways in which this film connects power and beauty are complex, even if the plots and characters are not.  I will focus my comments in this blog on how the themes of power and beauty are manifest in the character of the queen, Ravenna. 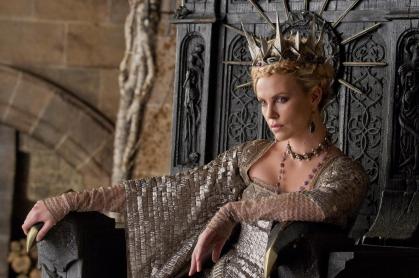 Ravenna on her throne

Ravenna’s relationship to beauty and power is tragic. We learn through a flashback that when she was a child, a king and his army came to destroy her village.  Ravenna’s mother cast a spell over her daughter to save her.  Three drops of her daughter’s blood in a bowl of milk—“your beauty is all that can save you,” she says, “it will be your power.”  “But be warned,” she adds, “by fairest blood it is done, by fairest blood it can be undone.” Sure enough, the child survives.  She is so beautiful the invading king takes her as his own (such is the implication).  Of course, we first meet Ravenna as an adult, pretending to be a prisoner of war. A new king (Snow White’s father) finds her and “so enchanted with her beauty” marries her the next day.  On her wedding night, while the king is preoccupied with her body and not paying her one bit of attention, Ravenna speaks at length about her past.  She tells us she was married to a king before, who would have replaced her with ease the way Snow White’s father seems to have replaced his previous wife with Ravenna. “Men use women,” she says, “and when they are done with us, they toss us to the dogs.” But Ravenna beats both of these men to the punch. As the king begins to choke on the poison she has slipped him she adds, “A woman who stays beautiful forever, the world is hers.”  After she claims the throne, she asks her mirror that famous question—“Mirror, mirror on the wall, who is fairest of them all?” The mirror names her the fairest and adds, “Is there no end to your beauty and power?”

These few scenes make it clear that this film depicts beauty and power as one and the same, at least where women are concerned.  The film is double handed in its depiction of Ravenna’s obsession with beauty and power.  On the one hand, the film self-consciously or perhaps off-handedly depicts a world in which women are denied power and valued only in terms of their sexual appeal to men.  Ravenna would have died as a child had she not been pleasing to that king.  Now, she survives again as a new king (we come to understand in a long line of kings) takes her as his own because she is sexually appealing.  The world set up by the film (deeply reflective of the reality we know) is one in which women are valued primarily, if not solely, by their physical appearance.  A number of times throughout the film, Ravenna remarks that she has been often broken and betrayed by men.  In this climate of perpetual sexual objectification (and . . . abuse? violation?) the actions of Ravenna and her mother are hardly surprising.  Yet, these objectifying kings are, in the eyes of the film, innocent victims of an unreasonably bitter woman.  Thus, the film explains clearly very real and complex reasons why Ravenna might develop a violent obsession with beauty (since it is her only link to some semblance of agency and in fact the only way she has learned to value herself) and at the same time judges her desperate attempts to live up to the standards of this patriarchal rule as evil. Ravenna’s rule is so evil in fact that nature itself withers and dies during her reign.

Unintentionally, this film offers a vivid depiction of the reality that women face—we are taught from infancy that beauty and sexual appeal are our power, judged and dismissed if we do not devote ourselves to keeping an impossible standard AND judged and dismissed, even derided, if we develop maniacal obsessions with beauty and fashion.  What’s more, if we, like Ravenna, challenge the “benevolent” patriarchal order that has reduced us to images rather than beings, our actions are perceived as unnatural, scandalous, unjust and over reactionary.  In Part II of this blog, I will address the theme of power and beauty in relation to the “heroine” Snow White and offer some additional comments on the relationship between these two women as it reflects some obstacles and possibilities for women striving to become in spite of patriarchal limitations.

Amanda Kieffer is completing her Master of Sacred Theology degree at Boston University School of Theology in Practical Theology, concentrating on Narrative, Aesthetics and Trauma. She also received her M.Div. in Hebrew Bible from Boston University and has her B.A. in Christian Ethics.  Amanda loves finding new ways to weave together her passions for creative writing, feminist narrative, embodiment, spirituality and myth, both ancient and contemporary.

Like Loading...
‹ “Vaginas are Everywhere!”: The Power of the Female Reproductive System by John Erickson
Back to Beginnings by Elise M. Edwards ›