Feminist theology was self-transcending to me. I was unafraid of going beyond the boundary of Christianity and its God.

Mago is the Great Goddess of East Asia and in particular Korea. Reconstructing Magoism, the cultural and historical context of East Asia that venerated Mago as the supreme divine, is both the means and the end. Magoism demonstrates the derivative nature of East Asian religions such as Daoism, Buddhism, and Confucianism while redefining East Asian Shamanism to be the religious expression of Magoism.

I encountered the topic of Mago during my doctoral studies. The topic of Mago fell out of nowhere at the time I was preparing for qualifying examinations. I had never heard the name, Mago. Only when I was able to collect a large amount of primary sources from Korea, China, and Japan, was I awakened to the cultural memory of Mago. I grew up craving the stories of Halmi (Grandmother/Great Mother), a common referral to Mago among Koreans. I had a childhood experience of being in the fairy land unfolded by my grandmother’s old stories. While “Mago” was unfamiliar to most Koreans, she was taken for granted in her many other names such as Samsin (the Triad Deity) and Nogo (Old Goddess) and place-names such as Nogo-san (Old Goddess Mountain) and Nogo-dang (Old Goddess Shrine). 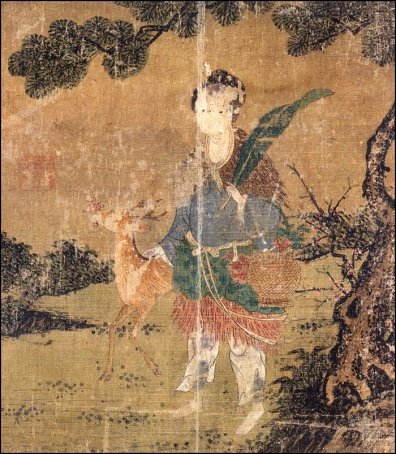 A Korean scholar, on a casual occasion, gave me a book entitled the Budoji (Epic of the Emblem City). He may have intuitively foreseen that I would make use of it sooner or later. The Budoji is an apocryphal text that describes the genesis event of Mago and her paradise called Mago-seong (Castle/Stonewalls of Mago) and an ensuing deployment of pre-patriarchal Korean history, thitherto unheard of. Upon my first reading of the Budoji, I was more confused than enlightened, but I felt drawn into and embraced by its mythic, historical and poetic language. I was already far along the path before I realized I was truly immersed within it! An ark of treasure emitting a pristine aura was laid before me, though I was too bedazzled to see within. Mago was there, shrouded in her old garments, seemingly obsolete, but a full and complete presence.

I was tongue-tied a while. But I did inquire about Mago among Koreans. I learned that Mago was recognized by contemporary Koreans, marking the modern revival of Magoism. A movie entitled “Mago” was being made. A newly formed feminist musical band named itself “Mago.” A tea house named the “Mago Cafe” further enforced the reality that there was a pride and understanding of her existence. Foremost, I was surprised by the fact that a large number of Mago stories were available both online and written documents. Many stories that depict Mago as the nature-shaper of local landscapes such as mountains, rocks (including dolmens and megaliths), seas, villages, streams, stone-walls, and caves, were still told by the elders in small villages of Korea. I also found historical materials that mention Mago not only from Korea but also China and Japan.

I brought up the subject of Mago to my advisors in time to propose a topic for my dissertation. This topic was barely known to anyone in academia. I was able to put together a bibliography with a considerable amount of source materials for my dissertation proposal. Secondary sources were, albeit small in number, also gathered. That marked the beginning of my study of Mago.

I had another dissertation topic at that time. In fact, my thitherto prospective topic was Mary Daly’s feminist religious thought. Daly’s feminist thought had been the guiding light ever since I first read the Beyond God the Father in early 1990s. I encountered Mary Daly’s post-Christian thought when I was on the brink of Christianity. I had been a member of Maryknoll Sisters, an organization that opened up to me the possibility of cross-cultural living. Though I dedicated myself to implementing Christian ideals, all I could see was the necrophilic “foreground;” a world dictated by patriarchal institutions and ideologies.

Feminist theology was self-transcending to me. I was unafraid of going beyond the boundary of Christianity and its God. Female subjectivity of which I was now conscious no longer held male subjectivity “neutral” or “objective.” My take of female subjectivity, however, needed to peel off another layer of ethnocentrism, Sino-centrism in East Asain studies and Euro-centrism in feminist studies. I began to re-orient myself to the new reality, “the Biophilic Background,” to borrow Daly’s term, by affirming myself, a Korean feminist, and all Others rendered as “inferior” by the patriarchal and/or Euro-centric self.

I was a self-motivated feminist learner. I had spent four years alone in reading or rather soaking in Daly’s books after withdrawing from Christianity. I translated Daly’s first two books as well as one Eco-feminist book edited by Diamond and Orenstein into Korean during that time. It was a time of self-birth as a woman-identified woman. I de-educated myself from patriarchal knowledge and ethics and spent time to reestablish my relationship with my mother.

The process of de-education took place inwardly while I was reading feminist books, keeping my daily journals, and practicing meditations including physical activities such as walking and stretching. These were the things that I had already been doing. What was new to this period was that I chose things that I wanted to do especially with my body and senses. I practiced gukseon-do (a Korean traditional mind and body exercise, equivalent to yoga) on a regular basis and took art lessons including fine art and calligraphic painting. I took time in nature visiting mountains, parks, and Buddhist temples.

I reflected upon my mindset to see if I was still feeding the conceptual habit of self-defeat imposed upon women by patriarchal religions and cultures. For example, I probed to see if I was still under the influence of the so-called “feminine virtues” of dependency, obeisance, and silence. For quite some years, I was caught in raw emotions of anger and grief. Nonetheless, I knew, even then, that those emotions were there to help me build myself as a life-affirming existence. Any practice that was necrophilic was something that I disassociated myself from and avoided.

Mary Daly was an essential figure in shaping my feminist consciousness, which eventually evolved to my reconstruction of Magoism. More than that, she helped me find women’s studies graduate programs in the United States. That is how I was able to begin the graduate program of Women’s Studies in Religion at the Claremont Graduate University (CGU), California.

The years of my graduate studies allowed me to quench my thirst for knowing feminist scholarship of the old and new. I was less interested in feminist studies as a matter of career development than as a commitment to myself. I was a misfit for the traditional job market, though I did not know this at the time. My cross-cultural experience of living as a member of Maryknoll Sisters had shaped my aptitude to learning. I saw life and work as a unified reality. Intellectuality without spirituality found no purpose for me. I was exploring the meaning of knowing and learning for a Korean feminist, to showcase an alternative feminist mode of subjectivity to the Eurocentric counterpart. The scholarship that I sought had everything to do with my own cultural and historical identity. I naturally moved to the area of East Asian studies. At last, I enrolled myself in another M.A. program in East Asian Studies at the University of California Los Angeles (UCLA) in some years after earning my Ph.D. degree from CGU.

Only then, did I learn that what I sought was nothing other than the Way, a religious ideal for traditional East Asians. A focus on East Asian studies enabled me to recognize the significance of the Way, upheld by East Asians regardless of one’s religious affiliations (Daoism, Confucianism, and Buddhism) or social statuses. In studying Mago, I was able to find evidence that the Way originated from Mago. Furthermore, I learned that the veneration of Mago, often referred to as different names such as the Heavenly Deity or the Triad Deity, shaped the landscape of East Asian religions and cultures. In short, I had sought the Way and found it in Magoism.

As a Christian, I had relished a wide range of meditation methods of the West and the East by practicing them one by one. My love of Zen Buddhism and Daoist thoughts such as the Zhangzi and the Laozi continued to extend to the spiritual teachings of Catholic saints both male and female. They were the stepping stones that helped me cross over to Magoism.

It became evident that I was to write about Mago for my doctoral dissertation. Timing was ripe. My advisors approved my proposal with the request that I needed to have five members instead of three in my dissertation committee because no one could oversee the project that I was undertaking. I duly embarked on my research on Mago. It was a long and winding journey to arrive in the place where I was supposed to be in the first place. I was returning home with Mago.

What motivates one’s scholarship determines its method and end. Any compromise would be detrimental to goddess studies. The conventional method forged to explain a dynamic of the so-called world’s great religions such as Christianity, Judaism, and Islam forecloses a study of goddess in her own context because they are inherently patriarchal devoid of the great goddess by definition while hijacking the female principle. In the case of Mago studies, a Daoist approach to Mago, as She is known as a Daoist goddess of immortality, fails to articulate her pre-Daoist origin and her pre-patriarchal manifestations.

Furthermore, the female principle of Magoism undercuts the androcentric underpinning of major East Asian religions such as Daoism, Buddhism, and Confucianism, subscribed by the Sino-centric premises. Bringing light to the submerged history of pre- and proto-Chinese Korea, Magoism redefines the Korean identity as gynocentic. By extension, the conceptual grid of modern nationalism proves to be inadequate in assessing the transnational manifestation of Mago’s supreme divinity. Magoism is pre-nationalist in origin and demonstrates the historical evidence of gynocentric supra-nationalism (note to supra-nationalism: a conceptual devise to undo nationalism).

(Postscript: I wrote this on my flight to South Korea on May 29, 2012. It was an otherworldly experience. Being on high feeling little gravity from the earth, I was able to spell out the word that I held closely in my heart for many years. My heartfelt thanks go to Anne Wilkerson Allen for her timely reading and commenting with a great interest.)

Helen Hye-Sook Hwang, Ph.D. (Korea and USA), is a scholar, teacher, and activist for Goddess Feminism. Hwang earned an M.A. and a Ph.D. degree in Women’s Studies in Religion (Claremont Graduate University, CA) and currently completing her second M.A. degree in East Asian Studies at UCLA. She has reconstructed Magoism, a pan-East Asian gynocentric cultural matrix that venerates Mago, the Great Goddess of East Asia. Hwang advocates Magoism as a historical framework in which women of the world can realize alliances across differences. Previously, she was a member of Maryknoll Sisters in Korea, New York, and the Philippines. Encountering Mary Daly’s Radical Feminism, she pursued her graduate studies.

Like Loading...
‹ GOD AND WOMAN AT YALE* by Carol P. Christ
Why Feminists Should See Snow White and the Huntsman by Erin Lane ›