We are told that it is the duty of a loving father and husband to protect his wife and children.  In exchange, good wives support their husbands and good children obey their fathers.  The bottom line of patriarchy is control.  The fight over abortion is a fight about men’s right to control women.

I have spent much of the past few weeks wondering why so many Republican men hate women.  Why do they want to deny the right to an abortion to a 12 year-old girl raped by her father, to a 21 year-old college student gang raped at a fraternity party, to a 33 year-old woman who submitted to a violent boyfriend she did not know had poked a hole in his condom, or a to a 41 year-old woman who offered a cup of coffee to the man who came to her house to fix the electricity, but who said “no” when he assaulted her.

I have also wondered why Republican men would deny the right to an abortion to 28 year-old married woman who got pregnant while taking the pill, to a 15 year-old girl who got carried away with her boyfriend, or even to a 35 year-old woman who got drunk one night and had sex without protection. We are all human aren’t we?  Birth control sometimes fails and sometimes women make mistakes. Apparently women are to be punished for both!

In the patriarchal system rape is not acknowledged.  Powerful men have always had the right to rape female slaves, servants, and serfs.  Employers have all too often felt they have the right to sexual access to female employees.  Teachers have taken sexual advantage of female students. Fathers and other male relatives have always raped vulnerable girls.  But because patriarchy promotes the myth that powerful men protect their inferiors, rape and abuse are covered up.

It is possible that Republican men believe that patriarchal men protect women and girls, and thus really do believe that “real” rape is statistically insignificant.  Over the centuries women who cry rape have been accused of making up stories about innocent men. With the exception of white women accusing black men in the racist south, false cries of rape have been widely exaggerated. Yet women continue to be vilified for upsetting the applecart—the myth that patriarchal dominance is basically a benign system.

This myth, sometimes called “love patriarchalism” allows men to believe that their acts of domination are basically good and to demonize women who in word or deed challenge their authority. The underside of “love patriarchalism” is hatred. Hatred of those who challenge a man’s authority. Hatred of those who dare to say that the kindly patriarch leaves his kindness behind far too often.

For many years I have believed that the “gender gap” in US politics meant that women were beginning to opt out of the patriarchal system.  However, in the past year I have understood that the “gender gap” is primarily created by women of color–who are less likely to have been protected by dominant men.  In 2008 52% of white women with college degrees favored Obama—a gender gap, but not a big one—while only about 43% of whites in other categories did.  In a recent Gallup poll 51% of white women favored Romney compared to 42% for Obama.

This suggests that there are a great many white women out there who believe that love patriarchalism is their best hope. Many white women without college degrees, along with many women who have them, know that they could find it difficult to support themselves—and even more difficult to support themselves and their children–in what is still in many ways “a man’s world.”  They know that there are growing numbers of women who “fall through the cracks” of love patriarchalism, but they choose to view those women as the exceptions.  They figure that if they “play their cards right,” they won’t be “one of them.”

Their spokeswomen are pretty, young, long-haired blonde women with girlish voices who defend the protection of life and the free market on television.  While these women remind me of factory-produced Barbie-dolls, it is important to recognize that looking like Barbie may increase their appeal to white women who are trying to live out the girlhood fantasy that if they look and act like Barbie, they too will find their Ken.  The myth of love patriarchalism will retain its appeal as long as women are sexually and financially vulnerable in a world controlled by men.  Because patriarchal dominance is clothed in the myth of love, it is a very hard nut to crack.

WARNING: THIS MAN MAY HATE WOMEN! 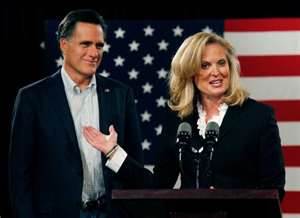 Update: A new poll by Lifetime discussed on Melissa Harris-Perry shows only 47% of white women supporting Romney.  I hope white women as a group are beginning to see that Republican love for us ends as soon as we express our independence.

Carol P. Christ is a founding mother in the fields of women and religion and feminist theology. Her books include She Who Changes and Rebirth of the Goddess and the widely used anthologies Womanspirit Rising and Weaving the Visions.  One of her great joys is leading Goddess Pilgrimages to Crete through Ariadne Institute.