Voice of Wisdom: What Hildegard Means Now by Mary Sharratt 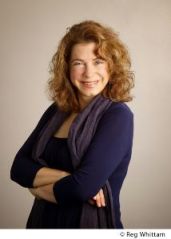 Hildegard von Bingen (1098–1179) was a visionary abbess and polymath. She composed an entire corpus of sacred music and wrote nine books on subjects as diverse as theology, cosmology, botany, medicine, linguistics, and human sexuality, a prodigious intellectual outpouring that was unprecedented for a 12th-century woman. Her prophecies earned her the title Sybil of the Rhine.

Pope Benedict XVI canonized Hildegard on May 10, 2012—over eight centuries after her death. In October 2012, she was elevated to Doctor of the Church, a rare and solemn title reserved for theologians who have significantly impacted Church doctrine. Hildegard is the fourth woman in the entire history of the Church to receive this distinction.

But what does Hildegard mean for a wider interfaith audience today?

I believe her legacy remains hugely important for contemporary women.

While writing Illuminations: A Novel of Hildegard von Bingen, I kept coming up against the injustice of how women, who are often more devout than men, are condemned to stand at the margins of established religion, even in the 21st century. Women bishops are still a subject of controversy in the Anglican Church, while the previous Catholic pope, John Paul II, called a moratorium even on the discussion of women priests. Although Pope Benedict XVI has elevated Hildegard to Doctor of the Church, he is suppressing Hildegard’s contemporaries, the sisters and nuns of the Leadership Council of Women Religious, who stand accused of radical feminism.

Modern women have the choice to wash their hands of organized religion altogether. But Hildegard didn’t even get to choose whether to enter monastic life—according to Guibert of Gembloux’s Vita Sanctae Hildegardis, she was entombed in an anchorage at the age of eight. The Church of her day could not have been more patriarchal and repressive to women. Yet her visions moved her to create a faith that was immanent and life-affirming, one that can inspire us today.

Too often both religion and spirituality have been interpreted by and for men, but when women reveal their spiritual truths, a whole other landscape emerges, one we haven’t seen enough of. Hildegard opens the door to a luminous new world.

The cornerstone of Hildegard’s spirituality was viriditas, or greening power, her revelation of the animating life force manifest in the natural world that infuses all creation with moisture and vitality. To her, the divine is manifest in every leaf and blade of grass. Just as a ray of sunlight is the sun, so according to Hildegard believed, a flower or a stone is God, though not the whole of God. Creation reveals the face of the invisible creator.

“I, the fiery life of divine essence, am aflame beyond the beauty of the meadows,” the voice of God reveals in Hildegard’s visions, recorded in her book, Liber Divinorum. “I gleam in the waters, and I burn in the sun, moon and stars . . . . I awaken everything to life.”

Hildegard’s re-visioning of religion celebrated women and nature, and she even perceived God as feminine, as Mother. Her vision of the universe was as an egg inside the womb of God.

According to Barbara Newman’s book Sister of Wisdom: St. Hildegard’s Theology of the Feminine , Hildegard’s Sapientia, or (female) Divine Wisdom, creates the cosmos by existing within it.

You encompassed the cosmos,

Encircling and embracing all in one living orbit

With your three wings:

One soars on high,

One distills the earth’s essence,

And the third hovers everywhere.

Hildegard shows how visionary women might transform the most male-dominated faith traditions from within.

Mary Sharratt’s Illuminations: A Novel of Hildegard von Bingen is published by Houghton Mifflin Harcourt and is a Kirkus 2012 Book of the Year. Visit Mary’s website at www.marysharratt.com .