The Inter-Faith Youth Initiative and Feminism by Ivy Helman

From June 25th through July 2nd 2013, I participated, as one of three Jewish mentors, in IFYI (Inter-Faith Youth Initiative), an inter-faith immersion experience for high school and college-age youth sponsored by Cooperative Metropolitan Ministries (CMM). The mentors and the rest of the staff guided, encouraged, empowered and supported 30 participants. Throughout the week, I also led an art interest group and co-led an affinity group with Beau Scurich, the Muslim chaplain at Northeastern. The entire community of participants and staff gathered around the week’s theme: the ways of truth and love. As Mahatma Gandhi said: “When I despair, I remember that all through history the ways of truth and love have always won. There have been tyrants and murderers, and for a time, they can seem invincible, but in the end, they always fall. Think of it–always,” (emphasis added).

The IFYI women after Jummah gathered for a picture with our scarves.

At the same time, sometimes the ways were literal paths. During one of our morning circles we all had the opportunity to “walk” a paper labyrinth with our fingers. The art group created a visual scrapbook of our journey together on a mural painted to look like a path or a way (see the pictures here). We created and participated in a walk through Boston for peace, justice and the environment. We also dedicated an entire day to walking with others in the form of service projects at City Growers in Dorchester and the Pine Street Inn in Boston.

Truth also had multiple meanings by the end of the week. As a community, we began with the principle that perhaps truth means something different for each one of us. We also acknowledged that understanding truth requires dialogue. Not only was dialoguing important but we also held onto the principle that we could, as a community, hold multiple and even contradictory truths

Mike, another Jewish Mentor, holding up a sign in front of the MFA during our Inter-Faith walk for Peace, Justice and the Environment.

and still journey and grow together. We attended Christian, Jewish and Muslim services together. Our walk for peace, justice and the environment through downtown Boston was an opportunity to speak our truths (much of which included speaking out against genocide, environmental destruction, human injustices while urging change). Personally, I spent much of the week discussing truth in the form of Jewish practices and observances (such as Shabbat and kosher dietary practices). I also devoted much time to dialogue with staff and participants about concepts within their traditions that I wanted to understand better.

In the end, I think love came to mean being in community together and all that entails. For example, we led/participated in workshops, came together to create art, music, writing, dance, film and theater and ate together and lived together on Brandeis University’s campus. Throughout the week, we supported, respected and cherished each others’ humanity in spite of the fact that we came from different traditions, backgrounds and life experiences.

One poignant example of community and love came during Saturday’s evening circle. The group had just listened to Isaura Mendes give a workshop on forgiveness. This inspired participants to share their personal experiences. Some participants felt safe enough to come out for the first time. Others shared unbelievable stories of

personal courage in the face of violence. Still others explained the pain of caring for friends, pets and/or family who could not care for themselves. In this sharing, a sacred space formed. While it was hard to listen to young people share such agonizing experiences of violence, shame, torment and difficult decisions for over two hours, it was also healing for individuals, a bonding experience for the community and an experience of love.

For the past week or so, I have been reflecting on this experience in light of feminism.  Not all inter-faith work is feminist that is for sure, but I think that inter-faith work and feminism share a commitment to dialogue and at least five common principles. First, the world is not as it should be. Like the feminist movement, most sincere inter-faith work acknowledges the need to understand each other and to work together to: end poverty and war, bring about justice (for women, children, developing nations, the environment, etc.) and love and support humanity. Second, humans from different perspectives and approaches should come together to make the world a better place.   Third, this takes work that includes dialogue and coalition-building. Just as feminists are committed to ending sexism, but we approach this goal from different angles, have different critiques of society and disagree about what a sexist-free world should be like, the inter-faith movement has its share of disagreements surrounding its goals as well. Fourth, coming together requires mutual respect which is not always easy especially when we disagree. There are plenty of areas where feminists disagree with one another and the same holds true for the inter-faith movement. Finally, only when there is a commitment from all sides to the process of dialogue and work can there be success as a movement.  In-fighting only weakens both movements.

This has led me to think about how this experience could benefit feminism (and the intersection of feminism and religion) in some way.  While IFYI wasn’t explicitly feminist in its goals or its reasons for gathering, I see no reason why in the future there couldn’t be inter-faith feminist immersion experiences for young people. Imagine the world we could create if every young person (and every adult for that matter) were able to immerse in a feminist inter-faith community if only for a week. 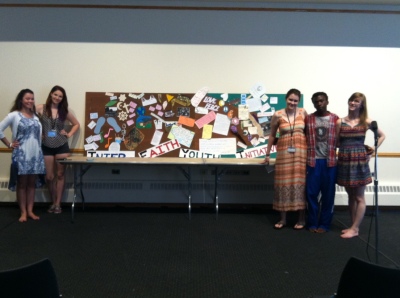 The art interest group next to the mural.

IFYI was an amazing experience for me. The week was the closest I’ve come to building with people (who happened to be from different faith backgrounds) an experience of true community, collaboration and visions of justice. I am lucky to have had the experience and to have been able to help make the vision become reality.  Thank you IFYI for the chance to grow and reflect.  I am forever grateful!

Like Loading...
‹ Painting Lilith, Leaving Church by Angela Yarber
Two Ultimates: The Ground of Being and Goddess by Carol P. Christ ›