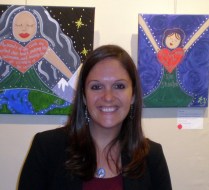 As hundreds of thousands of people are dying in Syria and myriad individuals suffer from political unrest in Egypt, as we continue to debate the sexuality of young women (yes, we’re still talking about Miley Cyrus) in the face of America’s rape culture and as countless nameless victims are ravaged by war, poverty, racism, and violence, I sometimes find myself overwhelmed, as though my two hands are never enough to reach out, help, rage, change.  And I find myself—and our world—in need of mercy and compassion.  Since I always focus on one of my Holy Woman Icons with a folk feminist twist, I am drawn this month to the Goddess of Mercy.  So, Guanyin joins this great cloud of witnesses who inspire, embolden, and surround us: Virginia Woolf , the Shulamite, Mary Daly, Baby Suggs, Pachamama and Gaia, Frida Kahlo, Salome, Guadalupe and Mary, Fatima, Sojourner Truth, Saraswati, Jarena Lee, Isadora Duncan, Miriam, Lilith, and Georgia O’Keeffe.

In English we know Guanyin as the Goddess of Mercy and Compassion.  Generally regarded among East Asian devotees as originating from Avalokitesvara, her name is shortened from Guanshiyin, which means “One who hears the sounds/cries of the world.”  In the Lotus Sutra, Avalokitesvara is a bodhisattva who is androgynous and can take on the form of any female, male, adult, child, human, or non-human sentient being in order to teach the Dharma.  Typically she is depicted in female form and she is widely venerated by East Asian Buddhists.  Though she is particularly poignant for Buddhists, Guanyin is present in almost every facet of Chinese religion, from Buddhism to Taoism to shrines for local fishermen.

As the personification of compassion and kindness, Guanyin is sometimes seen as a mother-goddess and the patron of mothers.  By the 12th century in China, her iconography was solidly female and in the modern period she is most often represented as a beautiful woman in a white robe or white dress.

She is a source of unconditional love, sometimes viewed as a savior who places the souls of those deceased into the center of a lotus flower.  In her bodhisattva vows, Guanyin promises to answer the cries of all creatures and to liberate them.  Because her compassion extends beyond humans and unto all creation, she is often associated with vegetarianism in East Asia.  You may find a depiction of her looking downward at the earth so as see all the suffering of the world, standing on a lotus flower or dragon in many Buddhist vegetarian pamphlets, magazines, or Chinese vegetarian restaurants.

According to the Complete Tale of Guanyin and the Southern Seas, legend has it that Guanyin vowed to never rest until she freed all beings from samsara.  No matter how hard she tried she realized that there were too many beings that lacked fulfillment and that she was unable to save them all.  After being overcome by the needs of the world, her head split into eleven pieces.  So, when the Buddha Amitabha saw her despair, he gave her eleven heads so that she could have more ears to help her hear the pleas of those who are suffering.  When she heard the cries of the universe and understood their suffering, she tried to reach out so that she could help all who were in need.  But her two hands were not enough, so they shattered into pieces.  Again, Buddha Amitabha witnessed her compassion and despair and gave her a thousand arms so that she could reach out to all who are in need.  Like iconographic depictions of the Buddha, Guanyin is also sometimes depicted with webbed hands so that no one can slip through the cracks between her fingers.  She, like the Buddha, can hold the suffering of all living creatures. 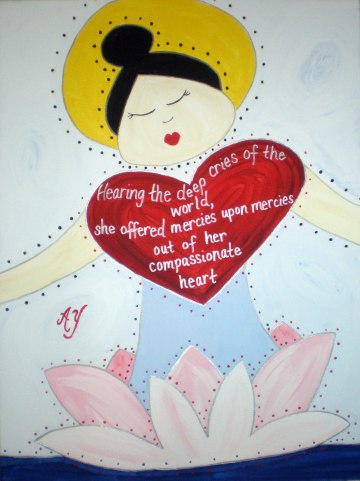 Whether she is portrayed as having eleven heads or one, a thousand arms or two, Guanyin is almost always surrounded by a halo of light, wearing white or light blue, and often accompanied by a lotus, dragon, or two young acolytes.

So, I spread her arms wide—wide enough to embrace and hold the entire world—and depicted her rising out of the lotus where she places the souls of those we have lost.  She stands in solidarity with our suffering, as her heart cries out to us:

Hearing the deep cries of the world,
She offered mercies upon mercies
Out of her compassionate heart.

It’s worth noting, too, that the act of compassion and feeling of mercy and love is viewed as being Guanyin.  Therefore, a merciful, loving, compassionate, and kind individual is understood to be Guanyin.  In the moments when we show compassion, when we share mercy with all sentient beings, we become the Goddess of Mercy.  When we become Guanyin, one less suffering soul slips through the cracks and is instead held in compassionate embrace.  Let it be so.

Like Loading...
‹ On Reading, Not Reading, and Disagreeing by Linn Marie Tonstad
Cultural conditions and Spiritual Subtleties by Oxana Poberejnaia ›