Painting and Ordaining the Holy Woman Icon by Angela Yarber

This month on the Spring Equinox I celebrate ten years of ordination. And for the first time in over fourteen years I am not employed as a minister at a local church. While I miss preaching and occasionally long for liturgy, I have never been more happy, and I find company and solace in the myriad holy women that fill my life. They have become my beloved community. They hold me accountable to my calling. They celebrate the birth of my child, dry my tears, laugh with me heartily, and remind me to dance for justice even when it’s difficult.

So, as winter turns to spring and I enter the next decade of ordained life now outside the church’s walls, I find myself clinging to Walt Whitman’s admonition: “From this hour forward I ordain myself loos’d of limits and imaginary lines.” As I think about this great cloud of witnesses surrounding me—my beloved Holy Women—I recall the ways in which we are all called to be prophets for justice.

Many have claimed that artists are our contemporary prophets, those who rage against the status quo, and call us to actions of justice that create beauty in the lives of all humanity, even all creation. So I turn to a great artist whose music has set free countless women and queer folk in search of new symbols, new language, new stories that are deep and wide enough to contain our subverted and searching spiritualities. The great womanist prophet, Tracy Chapman, sings these words in her song, New Beginnings:

We can break the cycle – We can break the chain
We can start all over – In the new beginning
We can learn, we can teach
We can share the myths, the dream, the prayer
The notion that we can do better
Change our lives and paths
Create a new world

And Start all over…

It is no secret that women, LGBTQs, persons of color, and myriad other oppressed groups have had to bear the brunt of oppressive religious symbols, signs, myths, and language. While many feminists rage within particular religious traditions to revise and redeem these symbols—linguistic and otherwise—many others have also stepped outside of tradition to create new symbols that have liberatory power for marginalized persons seeking to nourish their weary souls. Still others have combined these two seeming polarities by remaining within a faith tradition—often tangentially or on the fringe—and creating new liberatory symbols, as well. I’ve found myself dancing amidst all three of these modes of being as I paint my Holy Women Icons.

Some seek to revise and redeem the stories of women within particular faith traditions that have otherwise been drown amidst the torrents of patriarchy. I think of Mary, Guanyin, Jarena Lee, Saraswati, and Dorothy Day, for example. Some seek to step outside of tradition altogether and create new symbols: Mary Daly, Isadora Duncan, Frida Kahlo. Still others, such as Tiamat, Baby Suggs, Fatima, and the Shulamite exist on the fringes of their tradition, creating new symbols and language to provide freedom for the oppressed and marginalized.

In an effort to create new symbols, new signs, new language, perhaps even new archetypes for women struggling to find their spiritual voice, I created Holy Woman Icon. In addition to painting these strong, bold, and powerful women who have subverted, revised, or revoked their faith traditions, I wanted to also create a holy woman, an archetype for who I strive to be as a queer feminist, a model for all women seeking to find their soul’s voice. In imagining and then painting her image, I remind myself of who I want to be and become. In ordaining her into sainthood, I loose myself and all women of those imaginary lines that bind us.

Consequently, I cannot help but think of another prophet of our time, another artist who changes the status quo. Ntozake Shange’s choreopoem and Broadway play, “For Colored Girls Who Have Considered Suicide When the Rainbow Is Enuf” concludes by bringing together all the different colors of women for a “laying on of hands” in which Shange evokes the power of womanhood as the Lady in Red begins reciting the often quoted line, “I found god within myself and I loved her fiercely.” In this instance, Shange, like Chapman, creates a new symbol. For those of us steeped in religious language, one cannot help but think of the laying on of hands in ordination. By evoking this symbol, Shange revises what is otherwise an exclusive ritual—since women and queers are often excluded from ordained ministry—and revises it, redeeming the lived realities of women of color as holy, deserving of the fiercest of love. 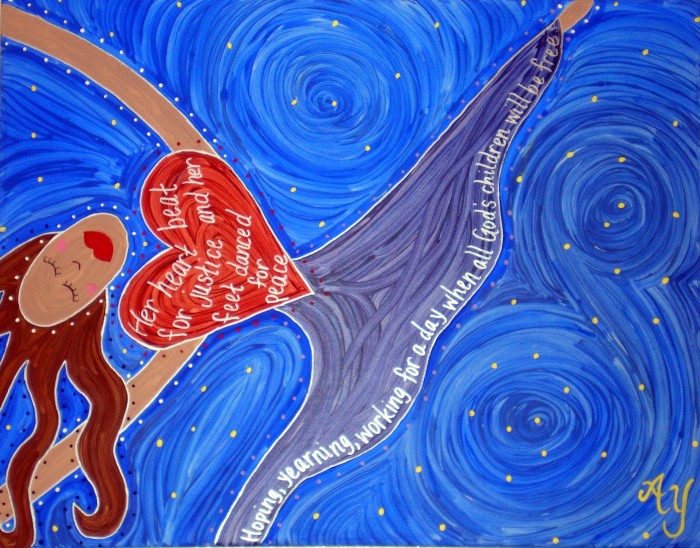 With my hands on the blank canvas, which is larger than most of my other icons, I ordained this woman the archetype of holiness, arbiter of justice, embodiment of the divine, the manifestation of my calling. With her head thrown back in wild abandon, her arms thrust out embracing all creation, and her body dancing in the direction of freedom, Holy Woman Icon became an embodiment of Alice Walker’s sentiment: “No one can end suffering except through dance.” Dancing toward us, prepared for a laying on of hands, her heart cries out to us:

Her heart beat for justice
And her feet danced for peace
Hoping, yearning, working for a day
When all God’s children will be free