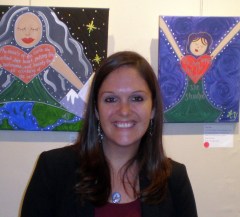 Cooper was born a slave in Raleigh, NC in 1858.  Her mother was a slave and her biological father was her mother’s white master.  After living and working as a slave until the age of five, Cooper began her formal education at a school for slaves.  She would grow up to become one of the most educated and intellectual black women of her century.  In fact, she was the fourth African American woman to earn a Ph.D. in the United States, writing her dissertation on “Attitudes toward Slavery in Revolutionary France.”

Anna Julia Cooper also published a book entitled A Voice from the South in 1892.  In her book, Cooper characterized God’s likeness as a “Singing Something,” a divine spark or “urge-cell” within each individual that, throughout history, has impelled humanity toward overcoming injustice into the full realization of freedom.  She describes God as a liberating voice.  This Singing Something within human beings is part of the “inborn human endowment” and “justifies the claim to equality by birthright” (Cooper, Equality of Races, 5). This Singing Something within human beings, then, is part of the very being of God.

Womanist theologian Karen Baker-Fletcher elaborates, saying, “In A Voice from the South…Cooper audaciously, shrewdly, and courageously questioned, challenged, and chastised the domination of the weak by the strong in Western culture.  Originally, Cooper delivered most of the essays in this volume as lectures or speeches.  She raised her voice to criticize the evils of racism, sexism, classism, and imperialism…” (Karen Baker-Fletcher, “Soprano Obligato,” 173).

Similarly, Mary Donovan Turner and Mary Lin Hudson laud Cooper as a preacher who held fast to her authentic voice, claiming that “through her love for music, Cooper came to use musical terminology to describe the importance of coming to speech.  Blacks, she noted, were like a muffled chord.  The black woman was a mute and voiceless note…Aware of the oppression that stifled their creativity and fullness, Cooper maintained that the black woman’s ‘little Voice’ must be added to the chorus…

For Cooper, then, being created in God’s likeness is not imagistic.  It is musical and auditory.  Cooper understood our god-likeness to be in sound, words, voice.  Thus, she spoke of not being created in the image of God, but in the sound of God.” (Mary Donovan Turner and Mary Lin Hudson, Saved from Silence: Finding Women’s Voice in Preaching, 93).  Cooper’s bold voice rose, like the voices of many other strong black women who sang the history of survival embedded in spirituals and gospel music.  With voices raised in lament, solidarity, and protest, we remember these songs that arose out of the Singing Something that dwells within…

“Nobody knows the trouble I’ve seen.  Nobody knows but Jesus” speaks of the ways in which Jesus is the co-sufferer, the one who knows what it’s like to be exiled, enslaved, and oppressed.

“Sometimes I feel like motherless child a long way from home” speaks of the ways in which slaves were ripped out of the context of home and family, literally separated from mothers, with the compassion of God alone as their heavenly mother.

Wade in the water, wade in water children.  Wade in water; God’s gonna trouble the water” speaks of not simply the waters of baptism and how God troubles those waters into places of equality, but the song also functions as a code that reminded slaves that when they steal away, they should steal away into the river where the master’s hounds cannot pick up their scent and they should wade in the water toward freedom.

And these songs not only functioned to identify with the compassionate and co-suffering God and as codes for escape, but they also served to subversively and secretly indict their captors.  “Have ya got good religion? Certainly, Lord!” not only speaks to the need of having good faith in the compassionate and co-suffering God, but it also indicts those who don’t have good religion, who keep faith and freedom away from black Americans.

So, with musical notes swirling about her, Anna Julia Cooper stands strong, centered with her arms spread so wide that they reach off the canvas, embracing and emboldening us to find the Singing Something within, as her heart cries out to us:

Wisdom pulsed from her
Heart, as she raised her
Voice, preaching the melodious
Notes of her God:
The Singing Something

This month we remember, lament, and repent for the injustice and oppression white Americans have heaped upon black people throughout history. This month we also remember, celebrate, and honor the bold, courageous, and prophetic voices of many black Americans in the midst of such oppression—in history and today. Anna Julia Cooper was one of these voices. Her songs, her scholarship, her preaching, and her prophetic witness may have occurred in the late 1800s, when black women were ostensibly treated as the least among us. Yet her songs, her scholarship, her preaching, and her prophetic witness remain with us still, reminding us of that urge cell within, the Singing Something, whose song is a song of freedom, a song of justice, a song of equality.