Home › Family › Surviving and Thriving: For My Defender by Sara Frykenberg

Surviving and Thriving: For My Defender by Sara Frykenberg

Last year many of my actions, choices and emotions could have been characterized as a part of my ongoing efforts towards what I recognize as survival: I was often ‘trying to make it through,’ live ‘despite,’ exist ‘even though,’ grapple with violence or choose in such a way that I could continue to live in the midst of chaos.

Survival is an extremely important skill, practiced by many people for many different reasons.  And before I continue here, I would like to say that in all of my struggles last year, I always had the basic necessities required to live my life.  Many people do not; and for many, survival is an everyday practice that may or may not be achievable, requiring access to necessities that may or may not be accessible.  No one tried to kill me last year.  I had access to food.  I did not lose my home or livelihood; though I felt these things threatened.  I am privileged to live where and how I do, with many resources available to me.  These resources helped me to make it though, where other people survive with far, far less.  I choose to share my own feelings of survival because I want to decry the self-dehumanizing shame that tells me I am bad or wrong for feeling my own experience.  I identify my survival in an attempt to also, thrive.

This past September for my birthday and prompted by my twin sister, two dear friends, my sister and I did a meditation to start practicing ‘thriving’ as a group.  We called on the elements of the Earth to create our circle, and shared our prayers.  We harnessed our power together to love one another and support one another in liveliness as we move from a very hard year into renewal and new creation.  Since completing this meditation, I have been struck time and time again with an awareness of how new forms of liveliness are possible in places they had not been before.  I have also come face to face with the way in which some of my hard fought and hard earned survival skills are not serving me now.  In particular, I have come face to face with my own defenses, or rather, defender.

My defender was invaluable to me.  She protected me.  She fought for me.  And I have discovered that it is time to let her rest and heal.  This blog post is one effort I am making to let her/me do just this.

I often drew comics of a knight and dragon in my notebooks in college.  I called the series The Pathetic Knight, because he spent most of his time charred, the dragon scolding him for his ridiculous attempts to be something he was not.  Usually, the knight would half-heartedly come to slay the dragon.  Annoyed, she’d sear him a bit, and he’d be left to extinguish the remaining flame on the tip of his sword.  I often imagined myself as this knight.  I loved dragons and never had any intention of killing one in these comics; but the knight continued to go through the motions for the comedic effect. 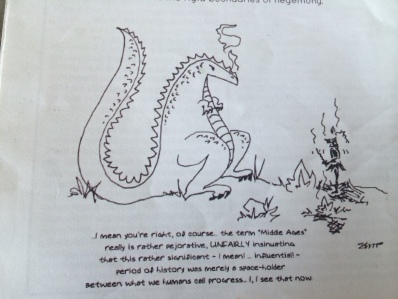 I published this comic in the Zine of the Graduate Student Council of Claremont Graduate University, March 2010, Vol. 2, Issue 1

Learning submission at a young age, I did not develop strong self-defense capabilities.  I knew how to hide and endure, not fight or run.  All of these are important survival skills; it’s just that I didn’t know any others, which was sometimes problematic.  A friend once surprised me and feeling scared, I crumpled to the floor, covering my head but not running away or screaming.  Laughter also became a part of my narrative: I thought that in private, I could laugh away my pain.

The dragon here is saying: “If I stand really still, maybe no one will see me,” there are of course, many other dragons hidden far better than she in the forest.

Feminism in some ways saved my life.  I learned how to be angry and how to fight back.  But over the last few years, surviving a new kind of violence, this instinct has changed.  I discovered that my inner lioness has sharp claws; and I found comfort in the power of my anger and rage.  The knight image of my comics slowly morphed into a new image of my own defender.  Accept she was not pathetic anymore:

A blanket of Anger spreads over me,
A protection,
Softness to the claws that should cut me.
I embrace it like a lover and she envelops me,
My guardian and protector,
My knight, my dragon.

I needed to be a strong defender; but embracing this defender I also learned things about myself I would rather not have known.  I learned about anxiety and what it means to have the ‘fight,’ in ‘fight or flight’ raging for release.  I learned more about my own violence.  I also started to learn to hate; and hate is a hard thing to expunge when you bury it in your heart.

I store anger with my sorrow,
Though they belong in different parts of my body.
They fill my lungs and I cough for months.
They smother my heart.
Is that why she feels like a blanket?
Like a cover that is thrown to smother the flames,
It produces smoke?
I didn’t mean to put the fire out,
I just couldn’t stand its burning.

The problem was not so much that I was able to be angry or find rage.  Anger is an important emotion telling us when our boundaries have been crossed, when we are unsafe or when we are afraid.  It speaks of injustice.  But my rage felt either impotent,* or like a weapon.  My defensive, protective anger seeped into every other emotion I had.

Somehow, I lost the ability to drown it out with my tears,
No matter how many fall to the ground.
I should have collected them,
Filled a vile with their magic tonic:
A dye I could keep to make by heart the color of burning again.
I didn’t mean to splash about.

I have not finished the poem I share above.  But, I have taken off my armor, scared as I was to remove it and as painful as it was to peel the charred chain mail off of my wounds.

I cannot embrace you while wearing such heavy armor, after all. 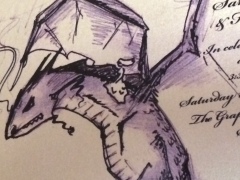 My sister drew this picture of me, riding on the back of a giant dragon, for my wedding invitation.

Following the advice of a good friend and spiritual healer, I have been meditating by literally envisioning my blood collecting oxygen from my lungs and carrying this charged life energy, or prana, back to my heart.  The oxygenated blood is bright and sparkles red in my visualization, restoring the ‘burning’ in my heart.  My defender protected me and helped me to survive: she (I) gave me something I needed.   What I need now is to heal the wounds I gave to myself when fighting back.  What I am learning is how to survive and thrive.

(Just an update on the comic: the dragon and knight still appear in my notebook pages, and in paper cuttings.  More often they are friends, or at least, tense friends.)

Sara Frykenberg, Ph.D.: Graduate of the women studies in religion program at Claremont Graduate University, Sara’s research considers the way in which process feminist theo/alogies reveal a kind transitory violence present in the liminal space between abusive paradigms and new non-abusive creations: a counter-necessary violence.  In addition to her feminist, theo/alogical and pedagogical pursuits, Sara is also an avid fan of science fiction and fantasy literature, and a level one Kundalini yoga teacher.

Like Loading...
‹ “MERMAID, GODDESS OF THE SEA” by Carol P. Christ
Theopoesis and the Interior Divine by Natalie Weaver ›