Ignorance and Invisibility by Ivy Helman

According to the United States Holocaust Memorial Museum, the Jewish population of Czechoslovakia numbered some 357,000 in 1933. By 1950, it was recorded to be 17,000. To be sure, some escaped to Israel or the United States. Yet, within the modern boundaries of the Czech Republic, some 77,000+ perished. You can find the names of the dead inscribed on the walls of Prague’s Pinkas Synagogue. The Jewish community here remains extremely affected by the effects of WWII and the lingering legacy of communism.

How much of that did you know? Did you know that Prague is home to what the Nazis once wanted to call the “Museum of an Extinct Race”? Did you know that most of the synagogues in this entire country are boarded up, torn down or used for something else? Did you know that the entire Jewish Quarter of Prague was almost destroyed until someone stepped in and persuaded others to preserve it? Did you know that Western media is saying that Jewish life in Prague is undergoing a grand rebirth, while at the same time, most tourists leave Prague thinking there are no Jews here anymore?

Some of the basics I knew before I moved here.   If you aren’t a history nut, have never been to Prague or aren’t a scholar of this region, I imagine some of that was new. Much of it will be new for my students next semester; I’m teaching a course on the Jewish experience in Eastern Europe at Anglo-American University in Prague. While parts of Jewish history include moments of flourishing and the good favor of those in charge, much of the history is fraught with anti-Semitism, pogroms, forced seclusion in ghettos and always, even in the best of times, an underlying suspicion. It seems fitting that the first time I teach a course on this subject is also the first time I’m living in this part of the world.

Yet, as much as one can capture the historical experience of Jews,  life here and now as a Jew isn’t as easy to figure out.  The community is extremely small so its resources and diversity is likewise limited (The registered numbe 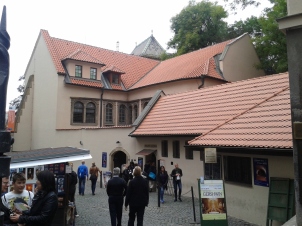 r is 5000. Prague has a population over 1.25 million people). The only group to use any of the synagogues in town are Orthodox, while the rest of us meet in basements of multipurpose buildings and people’s homes (I think). Some rarely update their websites or phone numbers so if you don’t know where to go they’d be next to impossible to find. I’ve tried two times to find the only kosher store in town. The first address I visited had become a different store. The kosher store that replaced this one gives two different addresses online and I’m not sure which one is correct. (The website now says the store is temporarily closed. If I kept the strictest form of kashrut, I’d be struggling to eat too.) The four kosher restaurants in town cater to the tourist, charging way more than any local or person living on a local’s salary could ever hope to afford.

I’m convinced that most of Jewish life is something tourists and Czechs only see in museums, a remnant of the past.  Even I, a Jew, has had a hard time finding much by means of community too.  The communities that seem more active also seem to be less egalitarian and queer friendly.  I often wonder as I walk past the throngs of tourists in the Jewish Quarter snapping pictures and visiting the Jewish sites if perhaps I should be on exhibit too.  This does not even scratch the surface on how difficult it is to live surrounded by reminders of extreme anti-Semitism.

Yet, what I’ve found most difficult is the attitude of many Czechs to anything Jewish. Maybe this is lasting anti-Semitism or maybe not. Let me offer one example that really hit home for me.

No one would ever think to schedule a work event for Christmas Day, yet even though my partner and I work at two different plac

es, both scheduled events for Kol Nidre. It is the most holy night of the entire Jewish calendar. We both felt excluded by our respective workplaces, especially when it became clear that neither organization even knew October 3rd was a Jewish holiday. When I told my workplace, there was no reaction. At least my partner’s workplace was very apologetic and many wanted to know what Yom Kippur was. My partner fielded questions for days. Here she was, a member of the minority group, educating others about herself.

Ignorance is often defined as the lack of knowledge, understanding, education or awareness. Ignorance, in general, does not necessarily imply that one is wholly responsible for the ways in which one is uneducated.  After all, one cannot possibly know everything.  Most ignorance I would classify as morally neutral, yet there is a line to be drawn here.  In the Czech Republic, people might be able to claim that they’ve never met another Jew.  I’d be willing to give them that, but one cannot claim total unawareness when one walks past Jewish sites every day. I’m pretty sure the average Czech believes what the average tourist does as well – that no Jews live here anymore.  This leaves one feeling pretty invisible if I do say so myself.

So, what does one do? My partner and I welcomed in the New Year and spent Yom Kippur at the Pinkas Synagogue, the Czech Republic’s main memorial to the victims of the Shoah and part of the Jewish Museum.  I’m not sure I’ve ever been in a place that was as beautiful as it was haunting.  It felt quite different from its everyday role as a tourist destination. What was even more moving was our experience at the Yizkor service when relatives of the victims s

tood in front of their family’s names and read them out loud.  The new American Ambasssador to the Czech Republic was at the services and read his family’s names from the wall as well.  The emotions in the room were palatable, the grief almost as visible as the names on the walls.

It felt as if the synagogue came alive again with the memories of the people who used to call this country home.   We prayed with them.  We honored lives taken too soon.  I’m not sure about everyone there, but, for me, as I prayed I could feel a sense of victory that Hitler did not win.   We are still here.  We aren’t invisible.

It is one small experience that changed much about how I approach life here. People will still be ignorant. There will be days when I feel like I’m the only Jew. However, now when I look at the Pinkas Synagogue, I am reminded that I’m not alone.

Ivy A. Helman, Ph. D.: A feminist scholar currently living abroad in Prague in the Czech Republic.  Her most recent publications include:  “Queer Systems: The Benefits of a More Systematic Approach to Queer Theology,” in CrossCurrents (March 2011) and Women and the Vatican: An Exploration of Official Documents(2012).

Like Loading...
‹ Painting “Unknown” Holy Women: Commissions, Gifts, and the Unsung Stories of “Ordinary” Women by Angela Yarber
Has the Phaistos Disk Been Cracked? by Carol P. Christ ›