Home › Archaeology › Has the Phaistos Disk Been Cracked? by Carol P. Christ

Has the Phaistos Disk Been Cracked? by Carol P. Christ

Recent headlines in the international press announced that the enigmatic language of the ancient Cretan “Phaistos Disk” has been translated—in part—by the Welch-Cretan scholar Gareth Owens. Owens states that the Phaistos Disk records an ancient hymn to a Mother Goddess. More specifically he claims that one side is dedicated to a Pregnant Goddess and the other to a Birth-Giving Goddess.

All of this is very exciting, but is he right?

I have been leading Goddess Pilgrimages to Crete for that past twenty years, in the course of which I have developed an intimate and scholarly knowledge of the religion and culture of ancient Crete. Participants on my tours sent me the news reports about the Phaistos Disk, assuming I would be thrilled to have confirmation of my understanding that the ancient Cretans worshipped the Goddess as the Source of Life, or as Marija Gimbutas says, as the powers of birth, death, and regeneration in all of life. 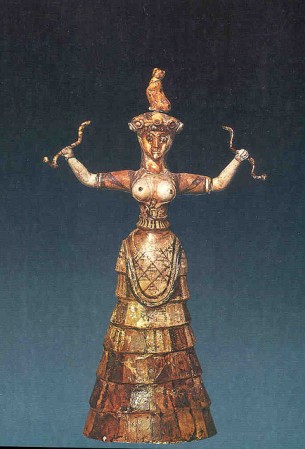 Reading the news reports, I noted that archaeologist-translator of the disk, Gareth Owens, identified the Goddess of ancient Crete as a “Mother Goddess” and more specifically as a Pregnant Goddess and a Birth Goddess . This raised a red flag for me. The most well-known Goddesses of ancient Crete, the bare-breasted Snake Goddesses, are neither pregnant nor giving birth. Other Goddesses pour liquids from the breasts, but again are not visibly pregnant or giving birth.

I decided to take a closer look at Gareth Owens’ claims: I watched his Ted lecture and read his numerous online published works. Before commenting on Owens’ translation of the disk, I will provide a bit of context. 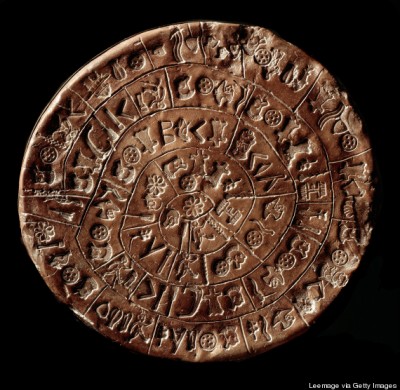 The Phaistos Disk is written in a “hieroglyphic” language stamped onto both sides of a clay disk which was then fired. The disk is dated to about 1700 BCE, at the end of what is called the “Old Palace period” of ancient Crete. There are no other exact matches to the stamped language of the Phaistos Disk—neither in Crete nor elsewhere.

There are 45 symbols on the disk, which suggests that the language might be syllabic rather than alphabetic (which would have fewer symbols) or true hieroglyphic (which would have many more symbols). On the disk, syllabic symbols seem to be divided into words by straight lines. Owens states that scholars agree that the disk is to be read beginning from its outside edge, spiraling into the center. It seems to me that it could also be read beginning from the center.

Owens concurs with other scholars that the disk most likely contains a prayer or a hymn—in other words, that its purpose was sacred rather than administrative. Owens suggests that the disk must have been dedicated to a Mother Goddess because the Mother Goddess was at the center of ancient Cretan religion. This assumption, while congenial to Goddess feminists, is likely to be contested by contemporary archaeologists who dismiss the idea of a Great Goddess as the focus of ancient religions as romantic fantasy.

Leaving this issue aside for the moment, three types of writing have been discovered in ancient Crete. These are known as Linear A, Linear B, and the hieroglyphic language.

Linear B was translated more than fifty years ago and is widely accepted to be an early form of Greek, a member of the Indo-European language group. Linear B is a primarily syllabic language (with a few logograms, picture-symbols that refer to complete words): its signs refer neither to words nor letters, but rather to syllables, for example, sa, ka, or ra. It is assumed that when the Mycenean Greeks entered or invaded Crete c. 1450 BCE, they brought with them the Greek language, but not having writing, adapted the logograms and syllabic script of the ancient Cretan language.

Linear A has not been translated. However, many scholars assume that “more or less the same” sound values can be attributed to the Linear A and Linear B signs. Thus, we can “sound out” the Linear A language, much as an English speaker can “sound out” written French or written German, without knowing the meaning of the words, where to put the accents, or that the same symbols may be pronounced somewhat differently in different languages. However, since Linear A is not exclusively syllabic but a combination of “logograms”and syllabic signs, “reading backwards” from Linear B is not straightforward.

Based on “reading backwards” from Linear B to Linear A, scholars think they may have recognized or translated a few words of Linear A. “A-sa-sa-ra” may be part of a libation formula or prayer, and some have speculated that it is the name of a Goddess–possibly related to Asherah or Ishtar. “I-da-ma-te” was found on two labryses (double axes) from a cave in Arkalohori. “Ida Mate” could be the Mountain Mother of Mount Ida.

These are not true translations. Asasara has simply been recognized as possibly being a name. In the case of Ida Mate, the assumption is made that the name “Ida” for the mountain range has been transmitted from ancient times, and that words beginning with “m” and “a” are common words for “mother” with a probable origin in prelinguistic babytalk.

Reading back from Linear B to Linear A, and basing his theory on a small amount of data, Owens believes he has discovered that Linear A uses an Indo-European case ending and that a few Linear A words can be translated using the assumption that they have Indo-European roots. Along with other scholars, Owens speculates that the ancient Cretan “hieroglyphic” language and Linear A were both were used to write the language of ancient Crete, with Linear A taking over because it was simpler. By a process which seems highly speculative, Owens “reads back” Linear A syllabic values into the ancient Cretan hieroglyphic language and the Phaistos Disk. (In contrast, Harald Haarmann believes the Phaistos Disk may be largely or exclusively logographic.)

Owens then claims to be able to translate two words that are repeated on the Phaistos Disk. He reads one of them as “i-qe-ku-rja.” He translates “ku-rja” as lady based on the Indo-European cognate “kyria” in Greek; he speculates that “i-qe” must mean something like important or great. He translates the phrase as “great lady of importance.” (There are other possibilities: why not “All Holy” as in the contemporary Greek “Panagia”?) Owens finds the key word “akka” on the other side of the disk and speculates based on Indo-European cognates that the word means mother and adds pregnant to make “pregnant mother.” He concludes that one side of the disk is addressed to a pregnant woman and the other to a woman giving birth (how he got giving birth from “great lady of importance” is not stated).

I have already questioned the notion that the most common attributes of Goddesses are pregnancy and birth-giving. It is time now to introduce another controversy concerning the dissemination of the Indo-European languages. Owens’ theory is that the ancient Cretans spoke an Indo-European language brought with them from Anatolia around 7000 BCE.

The Indo-European language group includes the main languages of Europe, among them Latin and Greek and the Germanic languages, as well as Sanskrit. Marija Gimbutas hypothesized that the Indo-European homeland was north of the Black and Caspian Seas and that Indo-European speaking groups began to invade or infiltrate Europe along the Danube beginning about 4400 BCE. This view is widely accepted by linguists.

However, there is a competing theory. The English archeologist Colin Renfrew proposed that the Indo-European languages spread from the Middle East into Europe along with agriculture. My friend and colleague, Miriam Robbins Dexter who is a linguist, tells me that “DNA studies, among other data, in the Tarim Basin, make it very clear that the Indo-European homeland is north of the Caucasus — just as Marija thought,” and that the “Indo-European lexicon shows a model of a northerly climate (and flora and fauna) and a pastoral, not agricultural, base.”

Underlying this dispute about the origins and spread of language groups is Marija Gimbutas’ theory about the two cultures of Europe. According to her, the pre-Indo-European cultures of Old Europe were peaceful, sedentary, agricultural, egalitarian, highly artistic, matrifocal, matrilineal, and probably matrilocal and worshipped the Goddess and the powers of birth, death, and regeneration in all life. In contrast the Indo-Europeans were patriarchal and patrilineal, nomadic, warlike, horse-riding, carrying bronze weapons, and worshiping the shining power of the sun. 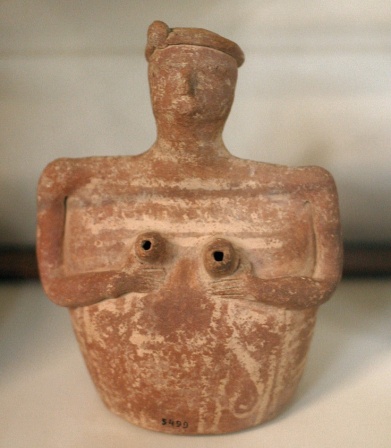 Has the Phaistos Disk been translated?

Is it likely that the Phaistos Disk is a hymn or a prayer addressed to the Great Goddess?

I think so, based on everything I know about ancient Cretan culture and religion—even though I am not convinced by new claims about the Phaistos Disk.

*Many thanks to Miriam Robbins Dexter for help in sorting this out.

**In addition to googling Owens’ online published works, readers might consult Harald Haarmann, “Writing in the Ancient Mediterranean” and Marija Gimbutas The Kurgan Culture and the Indo-Europeanization of Europe.

Carol has recently returned from a life-transforming Goddess Pilgrimage to Crete (on facebook)–early bird discount available now on the 2015 tours.  Carol can be heard in interviews on Voices of the Sacred Feminine, Goddess Alive Radio, and Voices of Women.  Carol is a founding voice in feminism and religion and Goddess spirituality. Her books include She Who Changes and Rebirth of the Goddess and with Judith Plaskow, the widely-used anthologies Womanspirit Rising and Weaving the Visions.  Follow Carol on GoddessCrete on Twitter.

Like Loading...
‹ Ignorance and Invisibility by Ivy Helman
I Look To The Sky by Martha Cecilia Ovadia ›