Despite the chocolate bunnies, eggs and toy chickens in the shops along with the coaxing to buy and celebrate Easter at this time in Australia, it is not Spring: Earth here does not seem to co-operate with the Consumer Faith, built as it is around the Northern Hemisphere and dominant Christian calendar. In the Southern Hemisphere it is Autumn, the dark part of the day is lengthening.

On March 20th at 4:30 UT Earth will be perfectly poised in balance for a moment: it is a global moment of Equinox – one of the annual two. Humans have celebrated it for millennia, perhaps for many tens of thousands of years, in ways appropriate to various regions, in both the South and the North of the Planet. The light and dark parts of the day in the South and in the North of our planet, are of equal length at this time. In the Northern Hemisphere it is Spring, and Easter is commonly celebrated: with those of Earth-based tradition celebrating the moment and season of Equinox with the name of Eostar.

Unfortunately this also happens in the Southern Hemisphere – the Consumer Faith is a World Religion, and the Christian calendar which celebrates Easter (by that name since the Middle Ages) has long been alienated from actually celebrating Earth’s holy days. Even some Southern Hemisphere Pagans persist in celebrating Easter in Autumn … I guess it is alluring to have chocolate eggs twice a year: that is, in September when it is actually Spring/Eostar, as well as March/April. However most Pagans in Australia do now celebrate the Autumn Equinox – often by the name of ‘Mabon’: and appropriately find it increasingly annoying that Easter paraphenalia is ‘in your face’ at this time.

For most Pagans – those of Earth-based tradition, in the North of the Planet, it is yet to dawn on them that the opposite Season is happening at the same time, on the same planet – that one cannot happen without the other at the same time: that is, that we live on a spherical planet. That actually is the essence of the revelation: a recognition of Where we are – our Cosmic Situation … taking that into account in the celebrations of place and season.

Southern Hemisphere Pagans and Goddess people continue to receive unseasonal greetings in emails and on lists where the author still presumes that the Northern Hemisphere is the world. Whereas they are talking to a global community – often in the hope of selling us something linked to the season. Southern Hemisphere people often simply accept the unseasonal writings, or are prepared to sit in the unseasonal virtual classroom unaddressed. I find this particularly bewildering when it comes from feminist Goddess women who have a history and understanding of being “othered”,  and yet continue to ‘forget’ the reality of the other half-Planet.

EarthGaia, as our planet may be named, also has a Solstice Moment twice a year  – and that means that She actually does Winter twice (in June S.H. and in December N.H.) and Summer twice (in December S.H. and in June N.H.). There is a symmetry in the significance of the two together poetically – which is quite lovely and  profound to contemplate: how Winter and Summer Solstices are in relationship – answer each other. EarthGaia’s two annual Equinox Moments –  Autumn (in March S.H. and September N.H.) and Spring (in September S.H. and March N.H.) share an awesome relationship, expressed poetically by humans since ancient times. Our ancestors had commonly connected them … the Greater and the Lesser Eleusinian Mysteries being an example. 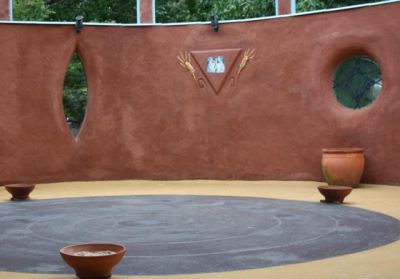 The cross-quarter Moments too have a reciprocal relationship as they occur co-incidentally in the different hemispheres; one is reflected in the other, they are actually present deep within each other … one aspect is manifest in the light part of the cycle and the other aspect is manifesting in the dark part of the cycle, mirroring each other. When this reciprocity is recognised and felt one is comprehending a wholeness of being that is actually true of every moment: it is a connection enabled by the gestalt of a spherical whole Planet.

I grew up under Southern skies – the Southern Cross constellation of the night sky in my childhood eyes. I was a country girl in Australia,  of European descent and heritage, and as I say in the Introduction to my book PaGaian Cosmology:

Most of the texts and graphics explaining the Cosmos to an Australian and white child were (and still often are) drawn from the Northern Hemisphere perspective. The Moon’s phases were “backwards”; Sun’s daily movement from East to West was described as being “clockwise” (and it wasn’t); the seasons in the stories were always at odds with real experience. This was never regarded as important enough to mention, yet deep within me from the beginning there was scribed the cosmic essence of disregarding one’s senses.[1]

Northern Hemispheric practitioners of the Old European Earth-based religious tradition, seem generally less aware than Southern Hemisphere practitioners, of the significance of the sacred site of seasonal ceremony: that is, where we actually are in the Cosmos, since many of those in the South of the Planet have had to come to our senses consciously. We have had to think about it. In these times of global transformation such an awareness of Where we actually are, seems a very positive attribute: it may assist in understanding Who we actually are. Whereas in the past, for me personally and others, the fact of being Southern Hemispheric, was initially a confusion, contributing to a deep internalised sense of being ‘Other’; it is now a clarity about the actual Planet and Cosmic situation. The ‘PaGaian’ or Planetary reality is that the whole sacred Creative Dynamic happens all the time, and all at once. The Other – the opposite – is always present, underneath and within: in each Seasonal Moment, or indeed in any moment.

Celebrating the Seasonal Wheel in the Southern Hemisphere, ‘plagued’ as we are with Northern Hemisphere metaphor, seems to contribute to a flexibility of mind: a capacity to move traditional correspondences around as we attempt to integrate our heritage with place. The colonisation of the South of the Planet is a very recent event in the history of Gaia – our minds and  our religious ceremonies,  are just beginning to catch up.

We in the Southern Hemisphere celebrate the Seasonal Moment of
Autumn Equinox/Mabon
We may feel the balance – Earth as She is poised in relationship with the Sun … a fertile balance of tensions:
may we express our grief for all that is lost,
and yet thanks for our harvest – given freely in every moment.

Glenys Livingstone Ph.D. (Social Ecology) is the author of PaGaian Cosmology: Re-inventing Earth-based Goddess Religion and has recently produced PaGaian Cosmology Meditations CDs. She has been on a Goddess path since 1979, which has included diverse spiritualities and a scientific perspective, inner and communal work as well as academic scholarship. Her studies have been in theology, ritual, archaeomythology, social ecology, psychology, sociology and education. Glenys lives in the Blue Mountains Australia with her partner Taffy Seaborne, where she has facilitated Seasonal ceremony for over two decades, taught classes and mentored apprentices. In 2014 Glenys co-facilitated the Mago Pilgrimage to Korea with Dr. Helen Hwang. Glenys’s website is http://pagaian.org.

Like Loading...
‹ Fuerzas Para La Lucha: Sources of Strength for the Struggle
Foremothers: A Book Review & So Much More by Kate Brunner ›