Since beginning her posts for FAR four years ago, Elizabeth has featured an excerpt from my chronicles each July in honor of my feast day on the 22nd.  At least I thought it was my Feast day. It has been brought to our attention that Pope Francis only recently elevated the 22nd to the status of a Feast. Before that, it was merely a Memorial of me as a saint, whether optional or obligatory I am not sure.  The only thing more elevated than a Feast day is a Solemnity.  (Needless to say my mother-in-law, aka the Blessed Virgin Mary, has one of those.)

You may not know me as Maeve, the Celtic Magdalen. Mary Magdalen, who she was (or is) should or could have been is a highly charged subject. Not very much is known about me, really, which is why  legends, novels, and films abound. I’m a storied woman, to borrow Natalie Weaver’s term. There are fourteen references to me in the Gospels. I am associated with the non-canonical Gospel of Mary (I believe the credit for that should go to Mary of Bethany whom many people conflate with me). Pope Gregory is largely responsible for my lugubrious image as a penitent prostitute. 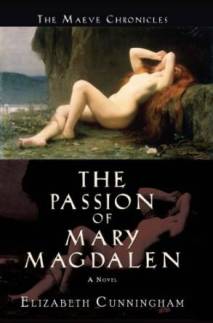 I first appeared unto Elizabeth in 1990, as a line drawing, quickly taking on flesh and fiery-neon hair and requiring dialogue balloons for my theological observations about the body (parts) of Christ. I called myself Madge. A modern woman and struggling artist, I invented the whole-body-no-holds-barred school of art and supported myself as a prostitute without a shred of penitence. Enchanted, Elizabeth asked me to star in a novel. None of her proposals interested me, till she made the connection between Madge and Magdalen, red hair and Celt. A Celtic Mary Magdalen! Elizabeth and I spent the next twenty years researching, writing, and living a story that came to fill four volumes. One thing we agreed from the beginning:

I am nobody’s disciple.

(How I came to be known as Mary Magdalen involves another storied woman. If you thought Jesus’s mother was mild and submissive, do check out my account of her!)

Back to my Feast. If you had known the apostles personally, you might not consider being counted among them a promotion. My friend and nemesis Peter has been called the first Pope, and all the rest claim his apostolic authority. By elevating the status of my day to Feast, Pope Francis seeks to honor me as the apostle to the apostles.  I would be more honored if, in my name, he had declared that women can be priests and have the unquestioned right to reproductive sovereignty. Pardon me for feeling puzzled—and more than a little miffed.

Edited for brevity, here’s an excerpt from Bright Dark Madonna, featuring a moment between the first Pope and me in the midst of a custody battle.

“Mary, unless you have come to repent and receive baptism in Jesus’s name and marry James or unless you are willing to give us the child, I have nothing to say to you.”

In the darkness I could feel him yielding at this invocation of the Name.

We sat down on a large flat stone, big enough to accommodate us both with a safe distance between us.

“Jesus,” I pressed my advantage and began praying first. “You told us that whenever two or three gather in your name, you are with us. So we know you are here now, with Peter and me.”

I paused, and in the close, soft night, I knew the words were true, Jesus’s words, my words. I could feel him sitting between Peter and me, closing the chasm between us. I knew Peter sensed his presence, too. I could hear him weeping.

“Jesus,” I went on. “We love you, Peter and I, but we have become enemies. We have hurt each other. For that, we ask forgiveness.”

“Jesus,” I cut to the chase. “Show us a way out of this mess. And to use your own prayer: please ‘don’t put us to the test’ by asking more of either of us than we can give.”

“Lord, Lord,” Peter was just getting started. “You said your yoke is easy and your burden is light, but sometimes it feels so heavy, Lord. I am doing my best to tend your flock, to feed your sheep, as you told me to do. As a matter of fact, I feed them quite a lot, but they keep wandering astray.”

I had to bite my hand to keep from laughing at the image of fat, errant sheep driving poor Peter to distraction.

“And this woman, some people don’t even think she is a sheep. Is she, Lord? We know you loved her and forgave her manifold sins and wickedness. But frankly, we still don’t get your point. Your ways are mysterious to us. So what am I do to about her now? Lord, she has your child, and she won’t give it up, and she won’t marry your brother, either, which frankly, Lord, I can sort of understand. I’ve been meaning to talk to you about James…”

“Peter,” I interrupted. “Stick to the point.”

“Oh, all right. If things go on much longer this way, someone is likely to get killed, Lord, and while we’re in Galilee, the other Mary has way too free a hand in Jerusalem, and she’s—”

“Peter! How about we let Jesus talk now.”

“All right, and Lord, I do agree with her on one thing: Show us a way out of this mess.”

Maeve Rhuad is the narrative character of The Maeve Chronicles, a series of award-winning novels by Elizabeth Cunningham. You can visit Maeve on FaceBook where she is a person while Elizabeth is a mere author. Elizabeth’s new novel, Murder at the Rummage Sale will be released on August 29, 2016 and is available for pre-order at your local bookstore and from online purveyors.  Elizabeth is a fellow emeritus of Black Earth Institute and posts quarterly for Feminism and Religion.

Like Loading...
‹ O Tempora o mores by Oxana Poberejnaia
“All Children Are Our Children” by Carol P. Christ ›