Mother Demdike, Ancestor of My Heart, Part 3 by Mary Sharratt

Continued from Part 1 and Part 2 When Bess was in her fifties, walking past the quarry at sunset—called daylight gate in her dialect—a beautiful young man emerged from the stone pit, his hair golden and shining, his coat half black, half brown. He introduced himself to her as Tibb and promised to be her familiar spirit, her otherworldly companion who would be the power behind her every spell.

Maureen Stopforth who runs the Witches Galore gift shop in Newchurch has warned visitors of a malign energy rising from the quarry but I sense nothing evil, merely a yearning that draws me in deeper until, near the back of the old stone pit, I find a man’s face carved in the rock—the handiwork of some fanciful Victorian who wished to pay tribute to Bess’s Tibb.

Attending a Halloween ghost walk, I bristle as the guide glibly describes Tibb as the “devil in disguise.” From my research, I learned that the devil, as such, appeared to be a minor figure in British witchcraft. Instead the familiar spirit took center stage—the cunning person’s spirit helper who could shape shift between human and animal form. Bess described how her Tibb could appear as a hare, a black cat, or a brown dog. In traditional English folk magic, it seemed that no cunning man or cunning woman could work magic without the aid of their familiar.

Wanting to learn more, I devour Emma Wilby’s landmark study Cunning Folk and Familiar Spirits, in which she compares witches and cunning folk in Early Modern Britain to shamans and medicine people in indigenous cultures. When Bess describes to her interrogators how she worked with Tibb, she almost sounds like a Siberian spirit wife, or shamanka, working hand in hand with her otherworldly spouse. Wilby states that historical cunning women often had the same familiar spirit their entire lives and the dynamic of that relationship could resemble a marriage with its ups and downs, its quarrels and reconciliations, its lasting passion and power.

The crimes of which Elizabeth Southerns and her fellow witches were accused dated back years before the trial. The trial itself might have never happened had it not been for King James I’s obsession with the occult. Until his reign, witch persecutions had been relatively rare in England compared with Scotland and Continental Europe. But James’s book Daemonologie presented the idea of a vast conspiracy of satanic witches threatening to undermine the nation. Shakespeare wrote his play Macbeth, which presents the first depiction of a witches’ coven in English literature, in James I’s honour.

So how did Bess Southerns, a woman so fierce that none dared meddle with her, come to ruin? The triggering incident reads like the most tragic of coincidences. On March 18, 1612, Bess’s teenaged granddaughter, Alizon Device, had a bitter verbal confrontation with John Law, a pedlar from Halifax in Yorkshire. Not liking the look of the ragged young woman before him, Law refused to open his pack to show Alizon the pins she wanted to buy. The pedlar, an older man weighed down by his heavy pack, turned his back on the outraged girl and walked away. He had only covered a hundred paces when he collapsed and fell “stark lame,” paralyzed in one half of his body. Having lost the power of speech, he stared up in sheer horror at Alizon who had run after him to see what the matter was.

Today we would clearly recognize that John Law had suffered a stroke. But both Alizon and the pedlar were convinced that her anger had struck him lame. Falling to her knees, Alizon burst into tears and begged his forgiveness before fleeing in terror. What must it have been like to believe that you wielded the power to cripple a man because he vexed you? What awesome and fearsome responsibility. Alizon was young, just coming into her powers. Her experience must have left her reeling with confusion and despair at her perceived crime.

When witnesses reported Alizon to the authorities, magistrate Roger Nowell wasted no time in arresting her. Possibly through the use of leading questions, he browbeat this illiterate young woman into implicating her grandmother and also Chattox, Bess’s rival, and Chattox’s daughter, Anne Redfearne.

The four accused witches were force-marched to Lancaster Castle, staggering over rugged hills and moorland. Both Demdike and Chattox were so frail and elderly it seemed a miracle they survived the journey.

On a blustery November night, I embark on a Dark History Tour of Lancaster Castle, still used as a prison and a court house to this day. Bess and the others were held in the bottom of the Well Tower, a subterranean chamber, where they were chained to the cold stone floor and to each other, left to rot in their own filth.

Our guide can’t take us down the Well Tower since it is still a part of the prison, but he describes in awful detail how the accused witches were handed over to the sadistic Thomas Covell, the head prison keeper, who reputedly slashed the ears off Edward Kelly, friend of Dr. John Dee, Queen Elizabeth I’s conjuror, when Kelly was arrested on forgery charges. Although English law forbade torture, Covell would have been allowed to beat and starve his prisoners at will. Being chained in constant darkness would certainly feel like torture to those who had to endure it.

On the Good Friday following the arrests, Bess’s worried relatives and friends gathered at Malkin Tower to discuss what they would do in regard to this tragic situation. Constable John Hargreaves came to write down the names of everyone present and later Roger Nowell made further arrests, accusing these people of convening at Malkin Tower on Good Friday for a witches’ sabbat, something he would have read about in Daemonologie, James I’s witchhunters’ handbook. The arrests didn’t stop until he had thirteen to make up the alleged coven. Twelve were kept at Lancaster and one, Jennet Preston, who lived over the county line in Yorkshire, was sent to York. Apart from Chattox and Demdike and their immediate families, none of these newly arrested people had previous reputations as cunning folk. It seemed they were just concerned friends and neighbors who were caught in the wrong place at the wrong time.

Not long after her arrest, Bess Southerns died in prison. Ever the wily cunning woman, she cheated the hangman before she could be brought to trial. Her family and friends experienced a different fate.

Her granddaughter Alizon, first to be arrested, was the last to be tried at Lancaster in August, 1612. Her final recorded words on the day before she was hanged for witchcraft are a passionate tribute to her grandmother’s power as a healer. Roger Nowell brought John Law, the pedlar Alizon had supposedly lamed, before her. Moved and filled with remorse to see the man’s suffering, she again begged his forgiveness. John Law, perhaps pitying the condemned young woman, replied that if she had the power to lame him, she must also have the power to cure him. Alizon sadly told him that she lacked the powers to do so, but if her grandmother, Old Mother Demdike, had lived, she could and would have healed him and restored him to full health.

The room in Lancaster Castle where the witches’ trial took place is now the judges’ waiting room, richly appointed with upholstered chairs and beautiful draperies. Standing with the rest of the Dark History Tour in the high-ceilinged chamber lit by only by candles on this November night, I listen to our guide describe the trial and its aftermath, how the condemned witches were hanged, then their bodies burned, and the charred remains buried in unmarked graves somewhere out on the moors. A chill penetrates my bones and I long to escape from these suffocating walls which have seen too much suffering.

When the tour has finished, I step out into the darkness, taking great gulps of air as I head for my car. I pass a red sedan with TIB on its license plate, as though a secret sign that despite the judges’ and magistrates’ every effort to rid Lancashire of its witches, Bess’s guiding spirit lives on.

By the mid-17th century, Demdike became a byword for witch. In 1627, only fifteen years after the Pendle Witch Trial, a woman named Dorothy Shaw of Skippool, Lancashire, was accused by her neighbor of being a “witch and a Demdyke.”

Jennet Device, Bess’s granddaughter and Nowell’s “instrument of God,” whose testimony sent her mother, sister, and brother to their deaths, was herself accused of witchcraft in 1633, along with eighteen others. Their accuser, ten-year-old Edmund Robinson, later confessed that he fabricated his entire tale in order to escape punishment for coming home too late when bringing in his mother’s cows. Before he revealed his perjury, three of the accused witches had died in prison. 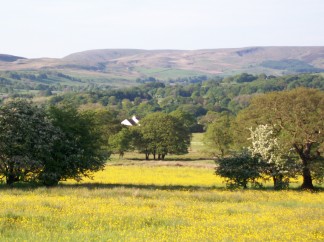 Long after their demise, Bess Southerns and her fellow witches endure as part of the undying spirit of Pendle. Their legacy is woven into the land itself, its weft and warp, like the stones and the streams that cut across the moors. This is their home, their seat of power, and they shall never be banished. By learning their true history, I have become an adopted daughter of their living landscape, one of many tellers who spin their never ending tale.

This article was originally published in SageWoman Magazine, Issue 79, Autumn 2010.