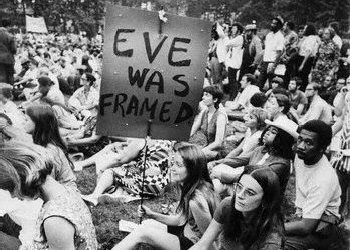 Like all my reflections, this is not intended to be conclusive, but rather, to share some impressions about theology and the way in which women are created or given an identity as believers.

In the androcentric and misogynist narratives of religious traditions lies the root of much violence against women. This is not new, since the same diagnosis has already been raised by the theologian José Luis Tamayo when he says that although women are the majority presence of religious communities and those most involved in the transmission and practice of traditions “they are the biggest losers” for all the exclusion and violence exercised against them in the name of religion.

The influence of religion on the lives of women goes beyond the realm of religion itself. From theology comes the gender discourses that impact our lives as political subjects. In all the most obvious (sociological, historical, economics) causes of the weak status of women, we can find theological roots or argument religion-based. These  roots are discursive. What is said about women from religions, as well as from the social and exact sciences, institutions and the media, are stories, narratives that are the product of the interaction of mechanisms of power, enunciation authority and historical accumulation of performative actions.

To paraphrase Judith Butler, the religious narrative on what it means to be “woman” is a discourse with cultural significance. They are not divine words, not dogmas, but stories, which produces different consequences in certain contexts: it is not the same to be identified as the remnant of the rib of the male, rather than being a complete individual created, also and directly by Divine Power. It is not the same that the greater attributes of the “believing woman” are sacrifice and motherhood, rather than knowledge and ability for leadership. It’s not the same in terms of representations and enabling of oppression or liberation.

Today, it is possible to identify two general pathways in the construction of an identity of women as believers: Women’s Theology and Feminist Theology. Let me briefly explain the difference between them.

Women’s Theology, not Womanism, is the tale constructed for an external power with privilege to tells us how to be the ideal believer, what we can expect or not from the spiritual life and, is the identity GIVEN, not discovered, to women as believers, most of the times, restrictive and disciplinary, deduced from traditional roles, without paying attention to our contributions in other areas and without considering the concrete situation of women in the world. It becomes into a “Biopolitics of Faith” that holds discourses and practices of external control over the body, identity and representations of women and the feminine.

By virtue of the narratives of the theology of women in religions, in their most traditional version, we have been represented as devout virgins, holy mothers, martyrs or redeemed sinners and these representations extend to society and reproduce in other narratives and intertexts like those of media news, pop music lyrics, art, etc.

Feminist Theology, on the other hand, seeks a political enunciation in the religious/spiritual realm. Starts with a critique of women’s theology, its patriarchal biases, its structures and authority; denounces its influence on the conditions of discrimination that we women live in religion and in the name of religion. Works around identities and spiritual experiences that are DISCOVERED and are dynamic and migrant, often in dialectic relation to the context, in what is called resistance. From this point of view, Feminist Theology is a challenge to the LOGOS of the TEO, it defies the foundations through which “God” is known and the very concept of theology as scholastic knowledge reserved for formal scholars and privileged intelectuals only.

For example, let’s take the case of mainstream Islam’s elements of its Theology of Women and paradigm of “Believer”:

The believing woman is a born Muslim woman, veiled, preferably living in the Middle East or an Arab country, heterosexual, married, mother, confined to the domestic space, docile and obedientof her husband, not challenging, not difficult to handle, not perceived as a threaten and totally focused on pious activities such as prayer and charity.

Hadith or stories of the tradition will be quoted to confirm this speech and the example of Prophet Muhammad’ wives, will be rub in our faces as the model of obedience, loyalty and piety to follow. Err … really? What about Khadija’s entrepreneurial ability and her I-dont-care-attitude towards the customs and expectations of her time? What about Aisha’s military genius or Umm Salama’s analytical sharpness? Just to mention some traits.

Especially what about the evidence the variety of characters of these women show us? That the believing woman is not a uniform product, monolithic and in serie as the theology of women pretends, but a colorful, diverse and contradictory human, unique and, above all, IN CHARGE.

Here lies the core of the bond between religious narrative, identity politics and women’s liberation. Feminist Theology is a chance for an hermeneutics of new narratives. This is relevant because, as Amina Wadud says, “defining religion is having power over it.” It presents a methodological option that rethinks theology as whole, with a theme of liberation FOR and FROM women, no longer as objects defined in a static way or as oppressed to liberate, but as persons with full right and agency to appropriate the sacred text and dismantle the discourses and representations in favor of greater social and gender justice.

Taclking the issue of identity politics and its links with religion, is critical to claim back the power, denounce violence and pushing down the models we have received from the theologies of women that, most of the time, are functional to androcentrism and the bitter-sweet preservation of our status as subalterns.

The liberation of women is, necessarily, a spiritual liberation.