Home › Activism › The Blue No Gaia Wants: Protecting the Sacred through our Lawns by Lache S.

The Blue No Gaia Wants: Protecting the Sacred through our Lawns by Lache S. 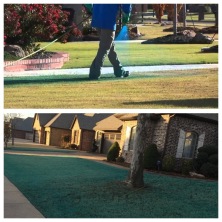 If Gaia is a living body, why are we painting her blue? Whether it is public parks or residential lawns, when there is that special odor in the air, I know to look down and there it is, an endless dye job on the grass indicating treatment. My city is concrete and blue dye for miles. Furthermore, I have sales people knocking at my door monthly asking if I want to spray pesticide around the house to decimate wasps, ants and spiders.

Many religious texts encourage us to mindfully consider the earth. The Jain Acaranga sutra, for instance, says, “a wise [person] should not act sinfully toward plants” (I.1.5.7). One way we sin against the earth so casually is by these mindless manipulations of our lawns, if we have them. (Technically, I do not have a lawn, but my roommate does, and I try to protect it). I do not think most people think about researching what they allow into the earth.

According to the EPA’s 2008-2012 Pesticides Industry Sales and Usage Market Estimates in 2012, farms, companies, and homes dumped over 1 billion (1,000,000,000) pounds of pesticides (which include herbicides and insecticides) on the earth. Homes are about 5% of this, but that still means 56 million pounds is seeping into the soil by our hands.

In the home and garden sector, the top-ranked active ingredient in pesticides used on lawns is 2,4-D. The second is Glyphosate. According to a meta-analysis of 12 peer-reviewed sources, beyondpesticides.org records that 2,4-D has been found to be linked to cancer, endocrine disruption, reproductive effects, neurotoxicity, kidney/liver damage, birth defects, and is an irritant, basically all seven of the health effects listed on its fact sheet. Glyphosate accounts for 5 out of the 7. These pesticides do not just stay on the lawns but end up as unavoidable indoor pollution. According to Marcia Nishioka, et. al. in the 2001 study “Distribution of 2,4-D in Air and on Surfaces Inside Residences after Lawn Applications: Comparing Exposure Estimates from Various Media for Young Children,” residues were measured one week before and after lawn application. 2,4-D was detected in indoor air and on all surfaces in ALL 13 houses. The study found this was ingested by children who touch surfaces with hands and then place their hands in their mouths.

In an attempt at investigating easy access and transparency of ingredients for lawn cares services, I emailed a business that services Oklahoma City to ask them what types of chemicals they use in their weed spraying. They emailed me back to say they “use a variety of chemicals throughout the year.” I inquired further asking if there was a list of the variety of chemicals used that clients could access somewhere. They replied, “not really.” I imagine, if there is no list, people using their services do not typically demand one prior to using them. This lawn “care” company’s website boasts, “You’ll Know Us by Our Blue Lawns!” as if it were a celebration. Is it?

We are connected to the earth as all elements are connected to each other. The Sutrakritanga says, “a tree springs up on earth, grows on earth, is not separate from earth, but is bound up in earth; so all things” (II.1:26, emphasis mine). In the same text, it is said, “Earth, water, fire, wind [. . .] know and understand that they (all desire) happiness” (I.7:1). How often do we think about the trees, how they stand rooted in their own meditation, and what pleasure we might bring to them by our touch, by a gentle humming of our voices near them in reverence? The earth longs for us to notice it and to notice ourselves, how our bodies cannot survive separately from it; this in itself should be pleasurable to know. In Jain literature, the elements are sacred. The Tattvartha Sutra, for instance, says, “There are five types of luminous gods: suns, moons, planets, constellations, and scattered stars” (4:13). What goddesses are the trees and how are we doing harm to our own souls by seeping glyphosate into the ground they drink from? The Sutrakritanga says, “by (hurting) these beings (people) do harm to their own souls and will again and again be born as one of them” (I.7:1). To such an empathetic author, a lover of nature and visionary of the soul and substance we share, it is not surprising they might envision the careless person to be reborn as a tree that other humans might similarly neglect.

Regardless of one’s belief in reincarnation, though, scientifically, our bodies do decompose into the earth after death.  And in perhaps a more literal return, there are companies such as Capsula Mundi that offer burial as a tree pod. The human body is arranged in a fetal position and placed in a pod of biodegradable material and buried beneath a tree that takes nourishment from it. Capsula Mundi “envisions a different approach to the way we think about death. It’s an egg-shaped pod, an ancient and perfect form [. . .]. [. . .] Instead of the cold grey landscape we see today, [cemeteries] will grow into vibrant woodlands.” I would like to return to the earth in a tree pod. But I would not like to be sprayed with blue dyed lawn treatment in that existence. Will you protect me?

LaChelle Schilling, Ph.D., graduated in 2014 from the Women and Religion program at Claremont Graduate University. She teaches composition from a contemplative pedagogical approach at Oklahoma State University. Currently, she is working on a book project titled Minimalism, Mindfulness, and the Middle Way, incorporating guidance from sacred wisdom literatures. She is also working on certification as a yoga instructor.

Like Loading...
‹ A Mother’s Gifts by Dawn Morais Webster
A New Story for the Summer Solstice by Barbara Ardinger ›