On Snakes by Ivy Helman

In the ancient world, snakes represented fertility, creativity, rebirth, wisdom and, even, death.  They were often closely connected to female goddesses, priestesses and powerful human females who were the embodiment of such powers.    For example, there is the Minoan goddess/priestess holding the two snakes in her outstretched arms.  She is closely linked with fertility and domesticity.  Similar figurines, with similar associations and dating to approximately 1200 BCE, have also been founded in the land of what once was Canaan, where Israelites also lived.  Medusa, in whose hair lived venomous snakes, turned men who looked at her to stone.  Ovid’s account of the creation of Medusa credits the Greek goddess Athena with Medusa’s lively hair.  Another Greek legend says Perseus, after killing Medusa, gave her head to Athena who incorporated it into her shield.  Athena, the goddess of wisdom, is portrayed often with snakes wrapped around her as a belt and/or on the floor next to her.

As I have mentioned before (in other posts), the authors of the Torah did as much as possible to distance themselves from paganism.  For example, tattoos were forbidden because they were commonly associated with pagan gods and goddesses.  Likewise, homosexual sexual acts were ancient pagan cult practices which is why sexual relations between two men were considered problematic (Leviticus 18:22).  In the same vein, the Torah distanced Israelites from snakes because of their association with powerful, sacred forces, such as fertility, creativity, wisdom, and death.

Athena in the National Archaeological Museum of Athens. (author’s photo)

It is very clear in the Torah’s depiction of the deity just how much distance there is between snakes, females and the holy.  The Israelite deity is the wise, yet warrior, king with ‘his’ own powers of creation and destruction, life and death, prosperity and famine and so on.  In fact, ‘he’ is the epitome of a creator having created the world and all that is in it.  Anyone or any being that also has or represents such creativity, fertility, wisdom, and power over life and death has been scrupulously separated from what is considered pure and holy (see various places in Leviticus, such as chapter 12, 15:19, 20:18).

This happens time and again to female Israelites for what are common bodily processes: menstruation, childbirth, etc.  When these processes occur, females are deemed ritually impure and must make atonement to once again be pure.  It’s as if one has to apologize for one’s very existence.

Likewise, in the Torah, snakes get a bad rap.  It is the snake in Genesis 3:1 that convinces Adam and Eve to eat the forbidden fruit.  That same snake takes the blame for human disobeyal and suffers on account of it by being deprived of legs and forced to crawl on its stomach. A snake also appears in light of Moses’ self-doubt in Exodus 4:3.  There, Moses throws his staff to the ground and it turns into a snake, scaring the wits out of poor Moses.  In Numbers 21:6, the deity uses snakes and their deadly bites to kill many Israelites for questioning why they were brought into the wilderness (Numbers 21:5).  Likewise, snakes are prohibited as food as they swarm as well as crawl on their bellies.  In other words, they are unclean (various places in Leviticus, see 11:41-46 and 20:25-27).

Yet, there is perhaps one exception to this rule.  The Torah acknowledges a positive pagan association when describing the snake of Genesis 3:1.  Even though it is described as devious, the snake is also shown to be knowledgeable (or wise).  After all, what the snake says becomes reality for Adam and Eve.

Before a few months ago, I would not have challenged the Torah’s vilification of snakes

even though it is closely connected to patriarchal conceptions of the deity and common bodily functions for most women.  Then, I ran across Brian Barczyk’s vlogs on youtube.com one day.  Brian and Lori, his wife who often appears in the vlogs too, own BHB Reptiles in Michigan.  He has made it his personal mission to educate people about (mostly non-venomous) snakes and to share his passion for all types of reptiles.  Barczyk’s philosophy behind snake-keeping and breeding, his approach to snakes, and his interactions with them have illustrated to me a different type of attitude towards snakes (and reptiles in general).  I would categorize his outlook as one of fascination, awe, respect and love. 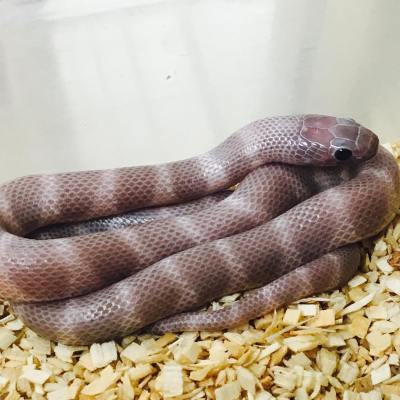 I never knew that there were so many varieties of snakes and in so many colors.  He has lavender ones and ones that look like candy corn!  They are beautiful.  He also has huge snakes whose power should never be underestimated.  He even has a snake he has named “loves to bite,” and another named Helen, a snake born with no eyes.  Each snake has its own personality which one can get to know through interactions with them.

Through this education and exposure, he has challenged my perspective causing me to conclude that the Torah’s understanding of snakes is unfair and unjust. Now, I think snakes are fascinating and inquisitive beings!  Snakes deserve our respect, not our fear and certainly not our demonization.

Education and exposure are such powerful tools when it comes to changing opinions, beliefs and mindsets.  Surely, they are part of the tools we need to topple patriarchy.  Even though I am not sure he’d characterize his vlog as anti-patriarchal per se, his vlog is an excellent example of just how mindsets can change through education and exposure.  Thanks Brian for opening up my mind to the beautiful world of snakes.

Ivy Helman, Ph.D. is feminist scholar and faculty member at Charles University and Anglo-American University in Prague, Czech Republic where she teaches a variety of Jewish Studies and Ecofeminist courses.