Home › Academics › What Is “Egalitarian Matriarchy” and Why Is It So Often Misunderstood? by Carol P. Christ

What Is “Egalitarian Matriarchy” and Why Is It So Often Misunderstood? by Carol P. Christ

In their purest form, “egalitarian matriarchies” place the mother principle at the center of culture and society. Their highest values are the love, care, and generosity they associate with motherhood. These values are not limited to women and girls. Boys and men are also encouraged to honor mothers above all, to practice the traits of love, care, and generosity, and to value them in others.

“Egalitarian matriarchal” societies are matrilineal which means that family membership and descent are passed through the female line. They are also usually matrilocal, which means that women live in their maternal home all of their lives. Family groups are usually extended rather than nuclear. Often there is a “big house” in which groups of sisters, brothers, and cousins live together with mothers, aunts, grandmothers, and great-aunts. In what I imagine to have been the original form of the system (still practiced by the Mosuo of the Himalayas), men also live in their maternal house, visiting their lovers at night, and returning home in the morning. 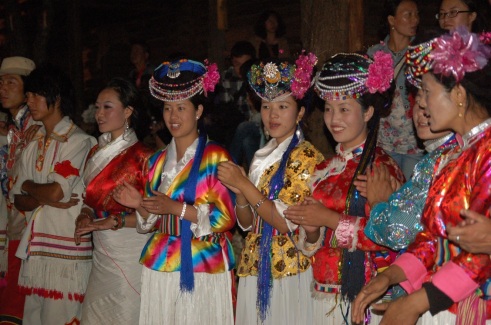 These societies practice small-scale agriculture. The women are owners and guardians of the land, which is held in common by maternal clans. They are also the guardians of the secrets of agriculture, food storage, and food preparation, which are passed down from mothers to daughters through songs, dances, rituals, and stories that celebrate the Earth as a great and giving Mother. The powers of women as birth-givers and as the guardians of the mysteries of the agricultural cycles are symbolically related to the powers of birth, death, and regeneration in nature and in all creative processes.

Women seated under trees in place of honor at Minoan festival

These social and cultural systems must have first developed at the beginning of the Neolithic era, when “woman the gatherer” first discovered the secrets of agriculture that allowed people to settle down and farm the land. If women discovered agriculture, then it makes sense that they would have been leaders in the first settled communities and guardians or owners of the land they farmed. They would have been the ones to build the first homes on or near the farmland. Sons as well as daughters would have been born in these early settlements.

The males of the families or clans continued to hunt. Over time they became responsible for building and heavy farm labor and for grazing flocks and seeking raw materials away from the settlement. It makes sense that they would be the ones to venture away from the community to gather information and to trade. In a recent documentary, Mosuo men stated that they don’t work as hard as women. This may not have been the case in the past. Today products and raw materials are brought in through the capitalist economy: traditional roles of traders are obsolete. Information gathering was an important part of trade expeditions: this is how new technologies spread rapidly in the Neolithic era; religious and cultural symbols were also shared by traders. Today there are books, newspapers, television, and the internet. Nor are Mosuo men involved in inter-clan negotiations in the People’s Republic of China.

From the division of labor in these societies, an egalitarian system of governance developed in which the elder women or grandmothers supervised the “internal” life of the house or clan. The “internal” domain included family and farm and all of the rituals surrounding birth, puberty, and death, as well as planting and harvesting. Women played central roles in creating and enacting all of these rituals. Through their expeditions and trade activities, elder men, the brothers of the grandmothers and uncles of the next generations, became responsible for the “external” relations of the clan, meeting people from other cultures when they were away from home, and welcoming visitors who arrived on their home territory.

Because of this division of labor, the elder men would have been the ones to meet and greet colonists and invaders and also to speak with storytellers, historians, and anthropologists, most often also men, who were interested in learning about their culture. If foreign men  came from patriarchal cultures, they would have assumed that the men who met them were the leaders of their groups. The party line in the field of anthropology, which is followed by academics in other disciplines, is that “men wield the power” in matrilineal societies. I was disappointed to read this when I first started learning about matrilineal societies as a graduate student and to find it repeated in a recent article arguing that Minoan culture might have been matrilineal and matrilocal.

Those of us who have been socialized in patriarchal societies in which “men wield the power” cannot easily imagine alternative systems. When we begin to think about female power, we immediately conjure up pictures where “women wield the power” by going to war, keeping men as slaves, sexually abusing and raping them, and forcing them into subordinate positions. Such images are so abhorrent that we may conclude that patriarchy is not so bad after all. And this stops us from looking for or wanting to envision alternatives.

In 1981 anthropologist Peggy Reeves Sanday challenged these conventional views in her ground-breaking Female Power and Male Dominance. Examining all of the pre-urban societies documented in anthropological records, she discovered that societies that celebrated and valued female power were not female dominant but egalitarian. She also found that societies that celebrated and valued male power were almost always male dominant. They tended to develop in times of external threat (when men became warriors) or environmental crisis (when the female power of the earth was viewed as having failed the community). Though Sanday’s arguments are convincing, they failed to change that anthropological consensus that “men wield the power” in all human societies, including those that celebrate female power and are matrilineal and matrilocal.

What the consensus that “men wield the power” in matrilineal, matrilocal, and matrifocal societies does not recognize is the power women hold in the internal relations of the group. For example, in the Iroquois culture, the councils of female elders that managed the day to day life of the clan were just as important as the councils of male elders that through their “chief” met with European settlers and invaders. In fact, the councils of female elders were slightly more powerful than those of the male elders. Iroquois women could remove male leaders they did not approve of and reject decisions of the male council to go to war. This power of the female council did not mean that Iroquois women dominated Iroquois men. Rather it was an important check-and-balance ensuring that men’s councils could not unilaterally take actions that would negatively affect the internal relations of the clan.

What should we call societies such as these? Obviously we should continue using the terms “matrilineal” and “matrilocal” where they apply. But what term should we use to describe these cultures as a whole? Archaeologist Marija Gimbutas called the egalitarian societies of Old Europe “matrifocal” because she recognized that the term “matriarchal” is usually (mis)understood to mean female dominant; this decision did not protect her work from being criticized for its challenges to the patriarchal consensus.

Peggy Reeves Sanday redefines matriarchy as involving “cultural symbols and practices associating the maternal with the origin and center of growth processes necessary for social and individual life.” Heide Goettner-Abendroth defines matriarchy to mean “mothers at the beginning,” based on one of the meanings of the root word “arche,” while at the same time insisting that matriarchies are egalitarian.

I dared to use the “m” word after reading Peggy Reeves Sanday and Heide Goettner-Abendroth. I define egalitarian matriarchy as a society and culture organized around the mother principle of love, care, and generosity, in which mothers are honored and women play central roles, and in which men also have important roles and every voice is heard. My new suggestion is that the “m”word always be preceded by the “e” word, in other words that we not use “matriarchy” unmodified, but always write and speak of “egalitarian matriarchies” in order to make it clear that we are not talking about female-dominated societies. This will be my practice in the future.

*You can read more in Societies of Peace by Heide Goettner-Abendroth, in Women at the Center by Peggy Reeves Sanday, and in Daughters of Mother Earth and Iroquoian Women by Barbara Alice Mann. Or watch The Women’s Kingdom or other documentaries on the Mosuo.

Carol P. Christ is an internationally known feminist writer and educator currently living in Heraklion, Crete. Carol’s new book written with Judith Plaskow, Goddess and God in the World: Conversations in Embodied Theology, is on sale for $3.71 kindle on Amazon in May 2018. FAR Press recently published A Serpentine Path: Mysteries of the Goddess. Carol  has been leading educational tours based on the religion and culture of ancient Crete for over twenty years. Carol’s photo by Michael Honegger.