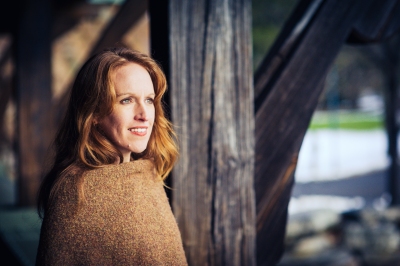 My woman’s body is entering the dark time of the moon, even with blinding white snow lashing the windows, even with a full moon tracing its way far above thick clouds. My mood is black and soon I’ll be flowing red, and the snow will just drive on white, white, white.

In The White Goddess, Robert Graves tells us: “…the New Moon is the white goddess of birth and growth; the Full Moon, the red goddess of love and battle; the Old Moon, the black goddess of death and divination.”

The Celt in me feels cradled by this imagery, even if, as Judith Shaw and Carol P. Christ have pointed out elsewhere on this site, the idea of maid, mother, and crone is a modern invention, not gift from the past. I agree with Christ:  “My suggestion is that we give up the idea that the details of contemporary Goddess Spirituality are rooted in and authorized by tradition. We can instead acknowledge that though we are inspired by the past, we are the ones who are creating contemporary Goddess Spirituality.”

In the midst of this menstrual blizzard, however, I’m not thinking about what part of my tradition is invented, reclaimed, or in a constant state of creation. I am simply wrapping myself in the colors of black, white, and red. My body wants to curl in on itself and be left to rest and release until I am renewed, but my mind is as restless as the wind.

And then, I remember there’s a trinity that we know for certain the ancient Celts held dear. They understood the colors black, white, and red to be the ultimate expression of beauty.

Deirdre of the Sorrows was the tragic heroine of Irish mythology who was destined to bring ruin to the land of Ulster. She grew up in seclusion until she could be married off to the king who imagined he had the power to thwart the druid’s prophecy, but still she dreamed of true romance. As Marie Heaney tells it in her Over Nine Waves collection, Deirdre exclaims to the crone, her only companion, “Look, Levercham, I could love a man like that, with hair as black as the raven, and skin like the snow, and cheeks as red as blood!”

Suddenly, the color scheme that seemed to offer such tender care for my human truth seems less perfect, less complete. And no, it’s not because poor Deirdre will throw herself from a carriage when her true beloved dies at her royal fiance’s command. Once I might have wept for her, back when nothing seemed more dramatic than star-crossed love, but now I’m moved by the collective struggle of people trying to make their way across an earth that seems terribly far from the heavens.

I am not a Celt from the early moments of history or even an Irishwoman of the modern age. I am a 21st century American of western European descent who has blithely traveled under the shelter of green eyes, red hair, and freckled skin for nearly forty years. Only now am I stopping right in the middle of my own story, mouth agape at a lifetime of assumptions. I’m reckoning with my own solipsism, with my unexamined beliefs about how my own experience and appearance was the universal, the default.

Only recently, as I grow and change with a world that’s growing and changing all around me can I see the damage caused by accepting the idealized “skin as white as snow” without question.

This ancient myth that describes this version of perfect beauty, it’s being revealed to be just that: an ancient myth. We’re in an age when any and all of our systems of division and control are under review – thank the goddess, thank the gods. We’re in an age when we’re called to create our own spirituality, our own culture, our own myths that refuse to equate “the ideal” with white skin.

“European standards of beauty can have damaging effects on the life trajectories of black women, especially those with dark skin, primarily in the form of internalized self-hatred,” says Susan L. Bryant.  This research isn’t new (Bryant does a fine job of summing it up here).  I invite you to sit with what researchers have recognized for decades – and plenty of people of color have realized for far, far longer: perpetuating this old beauty ideal without a second thought for what real people are going through right now is to permit and even condone suffering.

I cannot unsee. I do not want to unsee all that I am beginning to understand of the pervasive, malignant myth of whiteness: the social construct that sets white people and culture as the norm, the standard against which to judge all else.

It’s a private thing, one woman’s swirl of hormones within a life of privilege, but the stories that I use to understand my experience and to teach my fair haired daughters with their Irish names… Those are part of the collective.

And the collective changes the moment I challenge everything I think I know of beauty and risk ruining what my ancestors would have considered a perfect metaphor.

My quest: dig deep into the richness of the tradition that seeds my imagination. I ground into my corner of spiritual earth not to isolate myself, but to be strong enough to contribute everything I’ve got to being amongst “the ones who are creating contemporary Goddess Spirituality” – a Goddess Spirituality that affirms and includes all people and every shade of beauty.

Like Loading...
‹ My Heroine’s Journey: Writing Women Back in History by Mary Sharratt
A Question about “Egalitarian Matriarchy” in West Sumatra by Carol P. Christ ›