“Where is my mother? I am thirsty.”

My four year old is crooning quietly to her dolls. She is making sense of the crucifixion through play, asking her Disney princesses to stand in for Jesus, the Marys, and “the bad guys.”

Whatever she’s working through has more to do with the voice of John Legend and the cast of Jesus Christ Superstar In Concert than it does with a reading of the gospels. My children were raised with an eclectic mix of goddess spirituality, “all gods are one god” thinking, and occasionally attending a holiday mass. Thanks to this soundtrack, however, they’re suddenly saying things like, “Mama, I really love Jesus!” and “can I be Mary Magdalene for Halloween?”

What is it about the sacred, dangerous magic of the Bible that insinuates itself into our lives, even if it is no longer – or never was – our chosen religious text? “It’s ok, it’s from the Bible” opens the door to complicated, confusing, contradictory stories that I’d never offer to my daughters should they come from any other source.

I’m not alone in this “no R-rated movies, but bring on the irreverent, psychological, artistic versions of biblical stuff whenever you want” perspective. When I check in with other moms before I introduce their kids to the Apostolic buzz that’s on constant rotation in my SUV, I hear how much they love the show too. Maybe it’s because my friends have a secret, long-lost love of musical theater. Perhaps their Baby Boomer parents subjected them to the records once upon a time and the nostalgia draws them in. Ultimately I think it’s because we need this dark, compelling, human take on the sanitized stories they force fed us on the journey to Confirmation. 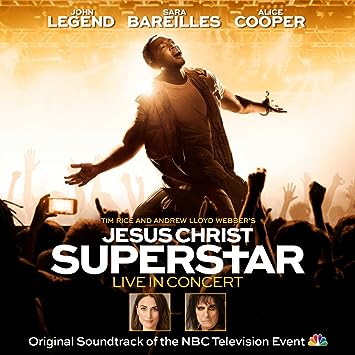 These stories persist over the millennia – and throughout “spiritual but not religious” lifetimes – because reinterpreting them helps us make sense of our complicated, confusing, contradictory world. And, because grown-ups aren’t really permitted to work out their own questions and confusion while playing with action figures, we stage plays and ask superstars to act out the parts.

There’s one more thing that makes JCS so relevant: we need the bible to be something other than a weapon that the right uses to defend their crimes.

When “Where is my mother?” Is Neither Ancient History Nor Child’s Play

On Easter Sunday of 2018 when this new version of the musical aired, we couldn’t imagine that the US government would soon be separating migrant children and parents at the border. Every feminist you know hadn’t yet started posting the shocking headlines, signing the petitions, and donating to the legal teams that would be negotiating to reunite families.

Innocents that we were back in April, we couldn’t understand the chilling prescience of a dying Christ uttering “where is my mother?” while ten million people watched it live on NBC, bellies full of roast lamb and scalloped potatoes.

When the country was discovering a new passion for a nearly fifty year-old rock opera, we could not foresee that this interpretation of a two thousand year-old story would force us to look in the mirror right now.

Father forgive them.
They don’t know what they’re doing.

“Mama, I Would Protect Jesus Just Like He Protected Mary Magdalene!”

Instinctively, I have protected my girls from the news about the children in tents, the inconsolable toddlers in foster care, and the families that may not find one another for a long, long time. When I’m driving the kids to dance class or to our vacation at the beach, it feels safer to blast songs of ancient betrayal, suicide, and execution than to let them know that babies are crying out “where is my mother?” in the language of homelands that are too unsafe to call home.

We play a double CD set of privilege rather than talk about how real people, real children are lonely and thirsty right now.

And yet, for all my attempts to shelter my kids, my four year-old knows that Jesus Christ Superstar is about more than murder, mayhem, electric guitar, and entertainment. Her favorite part is when Jesus defends Mary M:

When I help her understand Judas’s betrayal and Peter’s denial, imagine the tiny voice from the car seat crying out: “Mama, I would fertect Jesus just like he fertected Mary Magdalene!”

This child – insulated as she is by the accidents of whiteness, geography, and class – still seems to understand the phenomenal necessity of protection. She understands bullies, victims, cowards, and saviors. She’s already starting to realize she’s been born into a world that is inherently unsafe thanks to humanity’s sins of racism, tribalism, and exclusion.

Even after I’ve dropped her at preschool and I could switch over to NPR to educate myself about the latest political horror, judicial intrigue, and humanitarian outrage, I let the CD keep playing.

It’s these plaintive voices and screaming violins, not the news blips, the pontificating, and the opinionating that give me permission to cry, to feel what’s really happening. It’s the art, the music, and the play that makes the news more real than the headlines ever could. It’s the way a not-so-ancient, not-so-suitable-for-children story mirrors the hell that more than 2000 children and families are going through right now.

Suddenly, even as I drive the green winding roads of New York State, a distant desert border becomes a very real human frontier.

Suddenly, I realize that I can no longer wrap myself in the privilege of cowardice and sit in the audience anymore while the bullies persecute the victims and we all pray no one kills the savior too soon.

There’s still time to join a Families Together rally on Saturday, June 30 to demand an end to the cruel and unjustified separation of immigrant children from their families.: https://familiesbelong.org/