Home › Aging › Saying Goodbye to my Grandmother, by Molly Remer

Saying Goodbye to my Grandmother, by Molly Remer 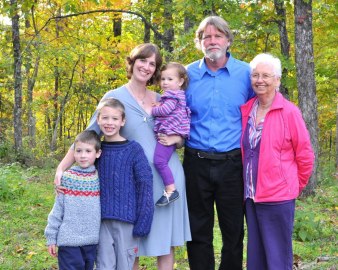 Four generations at my brother’s wedding in 2012.

It is October,
the veil is thin
the year is waning
the leaves are turning
I am trying to say goodbye
to my grandmother
she is dying.
I do not know what to say.

The leaves are red
the sky is blue
I saw a crow in the tree
behind the house.

The threads of this year
are becoming thinner.

The threads of her life too
are becoming thinner

What do I say to the one
who breathed life into my father
who wove his cells into being
who cradled him as a baby
who wept into his hair.

Carrying the cells
of the generations
The chain of life
continuing to spiral
through time, and place,
and distance
and falling leaves.

What do I say as life thins,
as breath fades

What do I say
as time folds in on itself
and now it is me in the bed
and my son, gray-haired, blue-eyed
is reading to me in a quiet voice 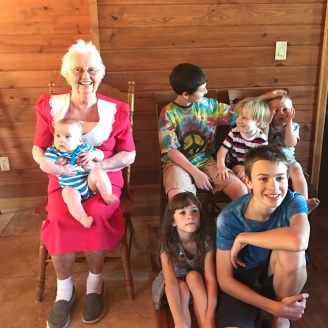 Grandma Johnson with her great-grandchildren in April, 2017.

as the chapter comes to a close.

That night,
I dreamed of my grandmother
she shrank to the size of a small child
I picked her up and held her against my body
We looked in the mirror cheek to cheek
and smiled together
I kissed her face and told her:
“You are wonderful.”
Then we danced around the room together
her head against my shoulder
I kissed her again on her white hair
and no more words were needed.

At this time last year, as the leaves fell and the wheel of the year dipped into darkness, my last grandparent died. I recognize that I am fortunate in having reached nearly forty while still having a living grandmother, but there is still such a sensation of finality and ending in saying goodbye to the final grandparent. Twyla was my paternal grandmother and I was not as close to her as I was to my maternal grandmother who died in 2013, but she is the woman who wove my father’s bones into being, and her death left a hole in our family and a sensation of an ended section in the tapestry of generations.

After the dream I write of above, I went back to see her a final time, five hours before she took her last breath. This time, I sat with her alone. I kissed her on her white hair and told her she was wonderful. I played her a song (Beyond the Gates by T. Thorn Coyle and Sharon Knight). I spoke to her of her good work in the world, that she had done it, that she’d finished her work, and that she had given so much and done so well. As a mother myself, the sensation of how powerful it is to have seen all your babies through to adulthood and into grandparenthood themselves filled the room. My dad, her second child and only son, has teenage grandchildren now himself. My grandmother’s youngest child of her five children is in her mid-fifties (and also a grandmother to teenagers). Sitting in the darkened room, listening to the song play, I was staggered by the magnitude of having seen each of your own children through their lives and into grandparenthood. While there are many ways to leave a legacy and it is not a “failure” by any means to not see all of your children into grandparenthood or to not have children yourself, what a gift it must be to bear witness to these generations if it does, in fact, unfold in that way, and to see your own tiniest baby have grandchildren of her own. This is something I hope to see for myself.

My dad holding his youngest grandchild at the memorial.

I then had the blessing, the honor, the privilege of being asked to prepare a memorial service for my grandmother.  Five years ago, I was also asked to facilitate the memorial ceremony for my other grandmother. The unique, uncommon blessing of fulfilling this role for both of my grandmothers is not lost on me, as I know no one else who has had the experience of serving both sides of their family of origin in this way. I felt so honored to be trusted to help guide my family through both of these experiences of loss and grief. I spoke to my husband of how humbled, grateful, and fortunate I feel that I have a family who would let me do this, not just for one grandma, but for both of them, and he said, “you know, honey, maybe we should all be grateful to you that you’re willing to do this for us.” So, I received that recognition into my heart with appreciation as well. 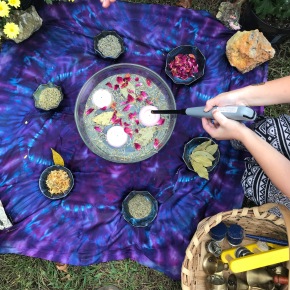 My daughter, then six, keeping the candles lit and tended on the altar space during the memorial.

It is powerful to create ceremonies that acknowledge transitions within the life of your family. During this ceremony for my grandmother we each had time to speak of her, I had poems I had written, and readings to share. We had a centerpiece with flowers, floating candles, and photos of her, and we each held handfuls of herbs that we offered into the bowl of water as we shared our stories and memories. Each person took time to do so and spoke with care, tenderness, love, and laughter. Sharing this time and space together and creating a container for people to be heard in their grief and love rather than participating in the type of “canned” or impersonal memorial service that may be more commonly offered by religious groups, was what we needed to say goodbye to this woman who wove a part of our souls. My aunt said: this is the kind of send-off that everyone needs, and that felt very true and real.

My extended family is not pagan or liberal or alternatively religiously minded and as I planned the memorial I was conscious of not wanting it to be “too much” for them. As I typed my outline, I’d first included a song and other practices common to other rituals and retreats I lead and when I heard that my aunts and cousins were coming, I’d removed the song and some ritual elements, fearing making them uncomfortable. They then said they weren’t coming, so I added the singing back in. On the day of the memorial, they did in fact come, and I decided we would sing anyway, whether 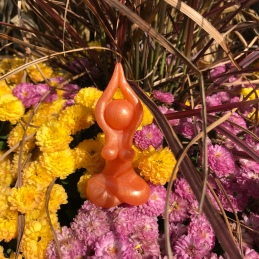 comfortable and familiar or not. We sang the same song to begin and to end the memorial (“We Are a Circle”) and when I looked around the circle the second time we sang and saw that everyone there holding hands, their faces wet with tears, were all singing too, I knew that it had worked.

If you have the opportunity to create ceremonies and rituals of personal meaning for your own family, please do it. It holds so much value, such life and power and love, in a way that is difficult to create by someone outside of the family. A small group of people who really care and who are willing to connect with each other in a meaningful, connected, vulnerable way, births so much real magic together. This container can be created by you, for you, and for the ones you love the most.

“Everyone can do the life-changing, world-renewing work of magic…the Dalai Lama said,

‘It’s not enough to pray and meditate; you must act if you want to see results.’ We are called to offer real service to others, to the Goddess. That service may take many forms: mopping the floor after the party, priestessing rituals, healing, planning, teaching, carrying the heavy cauldron from the car, sitting with a dying friend, writing up the minutes for a neighborhood meeting, organizing a protest to protect a sacred place from development, writing letters to Congress, training others in nonviolent civil disobedience, growing food, or changing the baby’s diapers. All of these can be life-changing, world-renewing acts of magic…”

There is a companion audio recording available about this memorial service preparation, the death of my grandmother, and about how to weave a strong “ritual basket” to carry a ceremony. The first part is an audio ritual for my online circle with thoughts about claiming your magic, fear of the label of witch, etc., so if you want to skip past that only to the memorial information and ritual theory, skip to 16:20 in the audio:

Molly has been “gathering the women” to circle, sing, celebrate, and share since 2008.

She plans and facilitates women’s circles, seasonal retreats and rituals, mother-daughter circles, family ceremonies, and red tent circles in rural Missouri and teaches online courses in Red Tent facilitation and Practical Priestessing. She is a priestess who holds MSW, M.Div, and D.Min degrees and wrote her dissertation about contemporary priestessing in the U.S. Molly and her husband Mark co-create Story Goddesses, original goddess sculptures, ceremony kits, and jewelry at Brigid’s Grove. Molly is the author of Womanrunes, Earthprayer, and The Red Tent Resource Kit and she writes about thealogy, nature, practical priestessing, and the goddess at Patreon and at Brigid’s Grove.