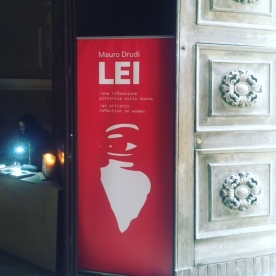 Mauro Drudi’s installation of LEI (SHE/HER) in the Chiesa de San Cristoforo on the Sicilian island of Ortigia where I usually take a bus to daily has become the shrine of women I’ve been searching for. Each time I cry, I am glad I can feel something: those tears are a mixture of communion, comfort, and recognition.

When one enters the church, there are two converging walls. On either side, a woman’s face painted in shadow and light, gazing off toward the light, is reproduced over and over so that the number of women looks almost countless. They are the same face, a reproduction of Antonello da Messina’s “Annunziata” in the mode of pop art. The difference is not in expression. They all wear the same thoughtful, complicated, neutral countenance, holding deep thoughts and experiences of suffering and wise knowing, both acceptance and maybe resistance; they have lived and might be any age, although I see in our connection my own. The difference is between glossy, unblemished surfaces of wood vs. surfaces weathered, slightly ragged, sometimes scribbled on with ink. The former, found on the right when one enters supposedly represents the “positive” woman, the “western woman [. . . representing someone] happy, gorgeous, well-kept.” On the left, about these representations, Drudi says, “Which artist can paint the skin of a woman who has been abused, beaten, exploited, captivated or disfigured with acid? In my opinion, nobody, and so I let the material speak: the wall of a beach hut destroyed by a storm; woods and materials used and abused [. . .]; exhausted panels deriving from carrying tons of goods, tables, packagings, production wastes.”

But the point is that the two walls converge, that the polished surface women only are allowed to have their pain be less visible, but the “frustration, depression, daily violence” are there.

I found this place by walking down the “wrong street” in town, which is simply to say a path I didn’t intend. I was feeling particularly unwell that morning, and as soon as I began to look on the women’s faces, without even really knowing what I was looking at (I had not read the pamphlet given to me), I felt my earlier fears, self-pity, isolation fall away; even a relationship that was slightly off kilter began the process of healing as I began developing empathy. I don’t know what it was about being surrounded by dozens of women’s faces that seemed to understand and reflect my own pain, but I keep returning.

On my first visit, I did not go into the room with a narrow opening off to the side of the altar in the sanctuary. It was dark. I could see some painted canvases randomly leaning against walls, but again, I hadn’t understood it was a part of the installation. I did not know if I was invited. If I had permission. It was dark, as I mentioned, so also perhaps dangerous to venture further, so I turned away and left.

Apparently, this was the point. The “Le Reiette (The Outcasts)” is in a part of the church where you have to turn your cell phone light on and find your way around. According to Drudi, “[They] make us understand that everywhere in the world there are people that can’t find their own space, role and are left excluded, unwanted, forgotten.” When I went in the second time, after knowing what the space was, I wondered how many other women, like me, wait for permission or invitation to encounter places that seem “off-limits.” As I walked through the narrow passage way, there was a breeze and a male voice from a speaker saying words I could not understand. A door was banging shut. But I tried to quiet my mind and look at the women. Some of them were beautiful, others were startling. Some did not look, according to their smooth surface, like they belonged. I realized I was alone, in terms of people viewing the art. No one followed me in. The third time I visited the installation, I noticed a hint of hesitance just because of the effort it took to venture into the hall, turn on my cell phone light. 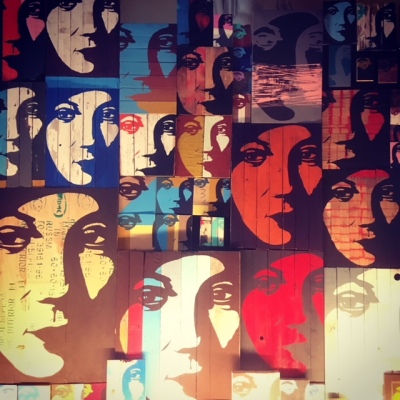 I took special note of all the emotions that came up in relation to all the parts of the installation, understanding them as metaphor for my dealings with other humans, seemingly similar and seemingly different, in the world. According to Drudi, “the rough and painful [surface] of suffering introduces us to a reality that often, from fear or laziness, we don’t want to see.”

Sometimes I look at couples beside me in Sicily who can afford to eat in a restaurant, not limiting themselves to a coffee. When I was in Ireland, at the market, I would look at women holding jackets and shirts, contemplating their future purchases, and think they have an extra 15 euro to spare because it is not reserved, as mine was, for bread and milk and grapes for the week. Of course, then I know that I feel hungry only 20% or 30% of the time and that there are other women who go hungry 50% or 80% of the time, that they would look at me, buying my bread and milk and grapes, and wish they had as much. What Drudi’s installation reminds me of is that, despite where we are in life at the moment, how dazzling and glossy some people look, that we all share the suffering of the human predicament. That we can’t be jealous or longing or resentful or forget about our own privilege and ease of navigating through life. Every life path requires sacrifice. I don’t know how many of us have the wanted balance of work, life, and love. I hope some of us hace it or will. The world needs all the smiles and laughter and feeling safe and satisfied as it can get.

Lache S., Ph.D., graduated in 2014 from the Women and Religion program at Claremont Graduate University. She teaches online composition from a contemplative pedagogical approach at Oklahoma State University. Currently, she is working on a chapbook of poetry and traveling through Iceland, Spain, and Ireland.

Like Loading...
‹ The Deep Exhale by Christy Croft
Women’s Ritual Dances and the Nine Touchstones of Goddess Spirituality-Part Three by Laura Shannon ›