Leading by Mandala by Nurete Brenner and Elizabeth Meacham 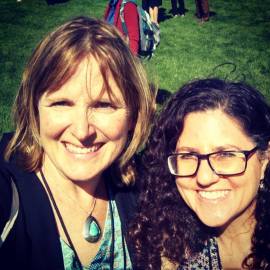 The old myths and images that sustained us in earlier periods are no longer serving us during this time of breakdown of the old and the uncertainty about the future. The lone wolf, the frontiersman, the all-powerful superhero – these tropes fade into irrelevance as it becomes clear that no messianic figure is going to step forward and part the sea for us. We need to find new stories to accompany us and new images to illuminate the path as we shift from a patriarchal-hierarchical structure to a collective, relational, participatory one born in partnership rather than domination.  Women’s leadership is the emergent idea that leadership is about co-creating a new story for the world during a time of radical transformation in Earth history.

The word “leadership” stems from the Indo-European root leith which means to cross a threshold. How does a society cross the threshold from the myth of the strong leader to a new story of collective leadership? One answer is by telling new stories. Traditionally women have been the storytellers of our culture, relaying and relating the fairy tales, the bedtime stories, the family-history narratives and cultural myths. The men who share in this story-telling role are those who are at one with their feminine aspect and we recognize that this activity is not at all new for Indigenous cultures which have maintained an ongoing tradition of participatory story-telling leadership.

The image that is conjured up is of women and male allies sitting in circles weaving their lives together through story-telling, deriving support from one another, respectfully offering attention and mutual deference. Sometimes the stories are told through the night with a fire in the center of the circle illuminating faces, but concealing just enough to allow pain and pathos to be spoken. Usually there is food involved because nourishing the body and nurturing the soul go hand in hand. As we share triumphs and trials, victories and victimization, dreams and dramas, a new mandala-shaped pattern emerges out of the weave and it is in sharp contrast to the patriarchal images of ever-climbing growth charts, looming structural spires, and pyramid shaped organizational charts with a CEO perched at the top.

And make no mistake, these story-telling circles are subversive. They might not seem so – which is their genius – but there is nothing today more radical than doing something in community where money is not exchanged. Anything we do to undermine the financial system is rebellious whether that is growing our own food, baking our own bread, or sharing our resources in gift exchanges. The time we spend in sacred story-telling circle is time we are not following celebrities on social media; it’s time we are not buying or selling commodities. This is precisely what the capitalist powers do not want us doing in the effort to turn us all into consumers.

The symbol of this new emergent leadership pattern is that of the mandala, a Sanskrit word for circle denoting a geometric figure that can be viewed from any direction. A mandala represents unity, harmony and psychic wholeness. There is no one right side to view a mandala, all sides are equal and all are necessary to complement and complete one another. Leading by mandala is leading by the feminine principles of balance, completeness, and inclusiveness, an understanding of the whole as well as the parts.

When we first started Lake Erie Institute, the non-profit that the authors of this essay now co-direct, it was the culmination of years of dreaming, and we found that many friends and colleagues were drawn to us with their own dreams and stories. Our first thought was to absorb their dreams and bring their ideas to fruition under our umbrella. But once we substituted the word “under” for the word “alongside” the mandala image of organization emerged. We realized that we could be the center of our own organizational mandala with others orbiting around us but we could also allow and encourage others to create their own unique organizations with other circling around them. Thus, an organic ecosystem was formed of interlocking circles of organizations without any need for competition or overarching dominance.  The mandala is a model and metaphor for a new kind of emergent leadership that can be applied to all forms of organizations.

Leading by mandala also means releasing control of linear outcomes and allowing the expression of the “wild” to emerge out of the primordial messiness that is the beginning of every endeavor. Often, the results of our plans come to be something completely different than what we first imagined. Most people who have ever written a book, created an art project, or started an organization of any kind know that the final outcome is rarely what we expected or thought when we first started out on the journey. We must lead with the confidence of uncertainty as we release planned outcomes to the emergence of what-is, which requires constant flexibility and flow. This is not to say that we are privileging the P-types in the Myers Briggs over the J-types. Both are necessary, and both are part of the weave of the mandala.

As we shift from an industrial to an organic model of leadership, we push beyond our boundaries of understanding. The mind cannot completely conceive where our hearts continue to lead, which is why women’s leadership embraces stories, dreams, mandalas. Leading by mandala means allowing new forms of organization to emerge that have not yet been seen in the world. It means digging beneath the patriarchal structures and finding a foundation of partnership. The new paradigm for leading will not focus on the individual alone but will instead arise from attending to the river of feeling and spirit that circles and flows between us as we orbit around each other in a gorgeous mandala of relationships.

Together, Nurete and Liz will be hosting a sacred Earth Passover Seder in Findhorn, Scotland in April, 2019 at the Climate Change and Consciousness 19 conference to take place there.

Nurete Brenner, PhD,With a PhD in Organizational Behavior from Case Western Reserve University, an MBA from the University of Derby and an MA from Hebrew University in Jerusalem and BA from Bar Ilan University in Ramat Gan, Israel, Dr. Brenner brings a global perspective to the work she does. She has designed a Masters degree program in Ecological Leadership whose core tenets are social justice, the value of life, and an understanding of the sacred. Dr. Brenner has taught courses in Economics and Ecology, socially-conscious business and Earth-conscious leadership at various colleges in the US and in Israel. Dr. Brenner also leads workshops and seminars on EcoJudaism and connecting to Earth. She is co-Director of Lake Erie Institute whose vision is to cultivate ecological community and leadership through holistic environmental education, to help restore balance with the Earth.

Like Loading...
‹ FAR: The Bodies of Christ, Broken for You by Tallessyn Zawn Grenfell-Lee
Making a New Home: It’s Not So Easy by Carol P. Christ ›