Note: This story was originally posted early in 2016. I’m posting it again because, thanks to the state of UNkindness the Abuser-in-chief has pasted all over the semi-civilized Semi-United States, we need lessons in kindness more than ever before. I bet you agree with me! 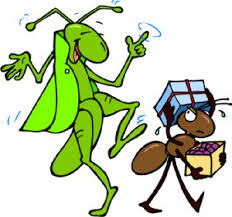 “Curses on that grasshopper!” exclaimed the ever-busy Madame Fourmi. “All he ever does is play. He’ll be sorry when winter comes.”

And so it went. Every day, Mme. Fourmi spent the morning scrubbing her front steps. And Monsieur Cigale?

“Partaaaaayyyyy!” Every day, he sped by on his skateboard. “Hey, Auntie Ant, stop cleaning the concrete and come and play with us. We’re gonna start a band!”

“Not on your life,” muttered this grandmother, most of whose conversations with her many daughters and granddaughters consisted of instructions on how to properly clean their homes and hills and how to prepare and store food for the winter. “Life is serious business, it is, it is. We need to plan ahead.”

“Oh, Auntie Ant,” Cigale called back, “lighten up!” Then he called his friends. “Yo, dudes! Let’s rock!”

Señor Cockroach and his cousins Vlad and Ludwiggie came first, carrying their Stratocasters. Then young Reb Cicada and Xiānshēng Cricket (who had leapt out of his little bamboo cage), both among the world’s best percussionists. Next, Gold William and his Fly Boys, ready to do the vocals. Finally, Mighty Dwayne Scorpion arrived. “At the downbeat,” he said as he raised his tail, and then, “Partaaaaayyyyy!” And the music began. So did other annoying habits of young partying males.

“Life is serious,” Mme. Fourmi said over and over. “There is no time to play. We must be ready for whatever may come. I’m gonna lay a good, heavy hex on those annoying boys. They don’t belong here.”

First, she tried throwing leaves of Dittany of Crete, which drives away venomous beasts, at them, but the boys just ate the leaves and kept playing. She tried Angelica to exorcise them. Nothing. Then she threw chunks of pumice and serpentine, which protect against insects. The boys put the stones in their rattles. She sent a gang of fleas to attack them, but the acrobatic fleas just picked up the thumb cymbals and began leaping higher and higher. She stirred up some Grasshopperbane and splashed it at them. Nada.

Finally, because the arthropodine band was playing at full volume day and night, she decided to build two new altars upon which to set up banishing spells. She was determined to commit insecticide. The first altar she dedicated to the pale green goddess who rules the night. The second she dedicated to the great orange monarch of the day.

Then she stood up and went out to her garden to pick beans and oats and kale to preserve for the winter. She canned tomatoes, carrots, yellow squashes, broccolis, blueberries, eggplants, white asparaguses, and blackberries. Then, when she had some spare time again and the band was still playing in the middle of the street, she went back to her two altars.

“I sure can try,” said Mme. Fourmi. “My intention is good. It’s to ensure peace and quiet in the neighborhood. To get rid of those noisy pests who play day and night and never do any serious work. I know what’s good for them! They need to be serious like me. They need to learn to plan ahead as I do. They’re so noisy—I hate them!”

Grandmother Spider shook her head. Her whole great web shook. “The first thing you must learn,” she said, “is to exorcise the word ‘hate’ from your vocabulary. We must never hate our fellow and sister creatures.” She stepped down a strand and came closer to Mme. Fourmi. “If someone bothers you, wish them well…somewhere else…and focus your mind on another thought. But don’t project hate. If you can’t project love, project indifference. Indifference is the true opposite of hate.” She reached into a bundle in her web. “Burn this sandalwood. Its smoke will clear negativity—and that is certainly what you need to do!”

Because one may not disobey Grandmother Spider, Mme. Fourmi burned not only the sandalwood but also some sage and lavender. She walked around her spotless house with the burning herbs. Pretty soon her emotions felt a bit clearer.

But the boys were still playing in the street. Yes, she felt clearer, but she was still seriously annoyed. “I don’t hate them,” she said. “But I am seriously annoyed by their so-called music. Don’t they ever take a break?”

Carefully avoiding the candles, the Great Orange Butterfly fluttered down to the altar. “Daughter,” she said, “do you know the story of the contest between the Sun and Boreas, the North Wind? You don’t? Let me tell it to you. There’s a lesson in it. The two great powers decided to find out who was stronger. There was a fellow standing on the street. The winner would be the one who made the fellow take off his coat. Boreas blew at the fellow on the street. He buttoned up his coat. The North Wind blew and blew, and with every wintry blast, the fellow hugged his coat tighter. Finally Boreas shook his head and stepped back. Now the Sun took pity on the fellow and smiled down at him. After receiving more solar smiles, the fellow took off his coat. ‘Well,’ said the North Wind, ‘I guess a warm smile gets better results than a cold blast.’” The Butterfly smiled at Mme. Fourmi. “That’s your lesson for today. Go out and smile at those musicians.”

“I am not kidding. Which would you want coming at you? The wintry blast or the smile of the sun?”

Mme. Fourmi got it. She went outside. Although, like Malvolio, she was out of practice where smiling was concerned, she gave it her best try.

“Oh, no, it’s summertime. Hot weather. I am not keeping cool.” But after one of the musicians explained “cool” to her, she nodded. “I guess that’s another lesson for me.”

The next day. “Would you boys like some refreshments? You seem to be working—ah, playing very hard.” And she brought them some good, healthy herbal tea, which, when she wasn’t looking, they diluted with other liquids they had. She also brought potato chips she’d forgotten she had. They promptly got potato chips all over the street and sidewalk.

“I hate—NO. I am annoyed at those bugs.” And she brought out her broom. She was very surprised when two of the musicians helped her tidy up the street and sidewalk. Then she remembered something her mother had always told her. “Thank you, boys. Please accept my thanks.” Mother was right. Always say please and thank you.

She had to think about that. She and music had never been on friendly terms. Music wasn’t serious enough. (She was unfamiliar with the German Romantic composers.) Finally, “Well, I remember hearing some folk songs. How about the one…‘Turn, Turn, Turn’?”

“Which reminds me,” she said when they had finished. “The season will indeed be turning. Are you boys ready for winter? What are you going to do when you get cold and hungry? You can’t eat tunes, you know.”

It came as no surprise when they admitted they hadn’t given the winter a single thought. “We live to play,” they said. “Life’s short! Enjoy it while you can!”

“Well,” said Mme. Fourmi, “you boys have some lessons to learn, too. But you know what? I like your folk songs. I don’t hate you anymore. Let’s see what we can arrange for winter. Since my children all moved out, I have extra rooms in my house. You can rent from me and—”

“—and work for our room and board,” said Cigale. “Dudes! Ya think? We can help with the cleaning and wash dishes and reach into places little Auntie Ant can’t reach.”

(Reprinted with the kind permission of Llewellyn Worldwide.)

Like Loading...
‹ New Beginnings: Re-Birthing Myself a Million Times and One by Lache S.
Meeting the Windigo by Carol P. Christ ›