In a previous post on FAR I wrote about some of the Easter customs in Greece in which pre-Christian and Christian practices intertwine, and I would like to pick up this thread again here.

Today is ‘Bright Saturday’, the Saturday after Greek Easter (one week after Western Easter in 2019). This week is known as ‘Bright Week’, and is the joyful culmination of the Orthodox calendar cycle which began with carnival back in February. During Bright Week, people come together in celebration and feasting. Fasting is not permitted, a welcome relief after the seven weeks of Lent.

While Carnival and Twelfth Night customs are mainly performed by men, spring rituals and dances are almost exclusively in the hands of the women. Many of the dance songs are sung a cappella by the women themselves, typically in unison, emphasising group unity and solidarity.

Songs of death and rebirth are a key theme in this season, and not only because of the obvious connection with Christian Easter. Many ritual customs contain survivals from spring festivals of antiquity and the death-and-rebirth mysteries of pre-Christian deities including Dionysos, Attis, and Persephone. Carol P. Christ has written movingly about the Epitafios, the bier of Christ which is adorned with flowers by the women and carried through the streets to hymns of mourning.

Many songs sung at this time are not heard at any other time of year. During Lent, music and dance are not exactly forbidden (except in Holy Week, the week before Easter) but as Miranda Terzopoulos explains, the focus is on seasonal songs, solemn laments of grief or exile, or epic songs commemorating tragic historical events.

One well-known dance in the latter category is the Kangeleftόs from Ierissós in northern Greece, which is solemnly danced every Easter Tuesday. The villagers dance in a long line which spirals in and out, passing beneath the raised arms of the first two dancers. The dance line also goes through an archway of branches, flanked by two young men holding swords. This commemorates a 19th century tragedy when the village was destroyed, lives were lost, and Greeks were made to pass beneath an arch of Turkish swords as a sign of submission.

Many other spring ritual dances feature arches and/or winding serpentine or spiral movements, not in memory of a past tragedy but as an ancient symbol of initiation. The dance Tsakónikos, for example, considered to be one of the most archaic Greek dances, is ceremonially danced on ritual occasions with a full spiral in and out. Greek folk dances do not normally spiral in and out, unless informally in a small paréa of dancers in a crowded taverna, for reasons of space; even then, the lead dancer is just as likely to ‘break’ the line in order to exit from the centre rather than lead the spiral out again. In general, when many people are dancing in a larger space such as the village square, the circle form is intentionally maintained, and the centre of the circle is kept clear and open. The spiral dances of Easter are therefore unusual in specifically entering that sacred central space, drawing dancers through the ancient spiral movement which reflects the springtime mysteries of descent and return.

The spiral dance may represent the movement of the snake and the shedding of its skin, a powerful symbol of transformation. Snakes were revered on Crete and in Old Europe, associated with the Goddess and embodying the sacred cycle of life, death, and regeneration. In the words of Carol P. Christ, “The serpentine path is the path of life, a snakelike, meandering path, winding in and out, up and down, with no beginning and no end, into the darkness and into the light.”

The journey into and out of the labyrinth may be an expression of the never-ending dance of earth and sun, in day and night, summer and winter, light and dark, as well as the chthonic mysteries of death and rebirth. Spiral, meander and ‘Greek key’ patterns are frequently found on funerary urns.

I have written previously about the women’s dance Tráta, danced on Bright Tuesday in Mégara and Eleusis, which I believe reflects Persephone’s journey to the underworld and her return in spring. 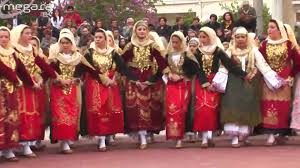 The story of Persephone and Demeter formed the heart of the Eleusinian Mysteries, ancient initatory rites based on the mystery of the grain which must die in order to give new life. This miracle of death leading to life is also at the heart of the Christian Resurrection.

The sacredness of life-giving grain remains a central theme of women’s songs and dances, particularly at this time. The end of Bright Week, marking the end of the Easter cycle, is called the ‘Lambri Kamara’, the ‘Shining Arch’ or ‘Shining Door’ through which we now pass from the privations of Lent and winter into the renewed life and abundance of the flourishing agricultural year. Lambri Kamara is the name of another women’s dance from Mégara, next door to Eleusis, which like the Tráta is danced only on Bright Tuesday. The song speaks of new love, the joy of family, and the beauty of spring, and calls the women to ‘take up their scythes’ to begin the summer work.

Ancient dances provide inspiring examples of community solidarity. They affirm and comfort our feelings of grief, and whatever our past losses, they help us move beyond our pain through the Shining Door and back into new life with the spring. May we also take up our tools, whatever they may be, and continue the sacred task of nurturing the earth, nourishing others, and bringing forth life from death wherever we can.

Laura Shannon has been researching and teaching traditional women’s ritual dances since 1987. She is considered one of the ‘grandmothers’ of the worldwide Sacred / Circle Dance movement and gives workshops regularly in over twenty countries worldwide. Laura holds an honours degree in Intercultural Studies (1986) and a diploma in Dance Movement Therapy (1990).  She has also dedicated much time to primary research in Balkan and Greek villages, learning songs, dances, rituals and textile patterns which have been passed down for many generations, and which embody an age-old worldview of sustainability, community, and reverence for the earth. Laura’s essay ‘Women’s Ritual Dances: An Ancient Source of Healing in Our Times’,  was published in Dancing on the Earth. Laura lives in Greece and in the Findhorn ecological community in Scotland.