Recognizing Our Mentors by Joyce Zonana

At the close of the introduction to her exquisite new translation of Homer’s Odyssey, classical scholar Emily Wilson directly addresses the reader. “There is a stranger outside the house,” she tells us:

He is old, ragged, and dirty. He is tired. He has been wandering, homeless, for a long time, perhaps many years. Invite him inside. You do not know his name. He may be a thief. He may be a murderer. He may be a god. He may remind you of your husband, your father, or yourself. Do not ask questions. Wait.

There is much to explore in this passage and the lines that follow. But what strikes me today is Wilson’s simple sentence: “He may be a god.”

The stranger may be a god. Or a goddess.

Ever since I first read it when I was sixteen, I have loved Homer’s Odyssey. For many years I was lucky enough to teach it almost every semester, and so I came to know it intimately. Despite the valid feminist critique of the ancient Greek epic—that it glorifies patriarchy, justifying and perpetuating men’s control over women—I still see it as  an inspiring evocation of female autonomy and power, both human and divine. Especially divine.

The main driver of the poem’s action is the goddess Athena—the “clear-eyed,” “owl-eyed,” “sharp-eyed” daughter of Metis who accompanies and aids Odysseus, Penelope, and Telemachus. As Wilson tells us, the Greek word metis means “cunning,” “skill,” “scheming,” or “purpose.” Athena embodies that cunning, that benevolent skill. Known for her “powers of transformation and disguise,” she sets the plot in motion and brings it to a close. She is the one who tells Zeus it’s time for Odysseus to finally get home and she is the one who brokers a peace treaty between Odysseus and the families of the impious suitors he has killed.

Athena’s first and final appearances in the Odyssey are in the guise of Mentor, an older man, a guest-friend of Odysseus’s. At the beginning, Mentor arrives out of nowhere to inspire Odysseus’s “dejected” son Telemachus to action; at the end, again arriving out of nowhere, Mentor insists that Odysseus lay down his arms.

The Oxford English Dictionary defines “mentor” as “an experienced and trusted adviser or guide; a teacher, a tutor; an experienced person . . . who trains and counsels new employees or students.” It’s a purely secular, practical definition, good as far as it goes. But our modern term derives from Homer, where Mentor [his name has the same root as mentes, “mind“] was, inescapably, a shining avatar of Athena. After cheering Telemachus, Mentor abruptly flies away “like a bird”:

Watching her go, [Telemachus] was amazed and saw /she was a god. Then godlike, he went off / to meet the suitors.

Perhaps we would do well to recognize the numinous aspect of our mentors.

Throughout the Odyssey, Athena takes on various guises: here a young girl, there a shepherd, here a dream-figure, there a mist. But, always, her function is to guide and console, to pour “sweet sleep” on tired eyes, to bestow strength and beauty, to inspire flagging souls with courage and fortitude, to suggest good ideas and reject bad ones. “I am / a goddess,” she reassures Odysseus at one point; without her, he is “lost and confused.”

When I was in my early twenties, a college dropout, lost and confused myself, I happened upon my own mentor—a stranger who answered my ad for typing services. An older man, a successful professional in several fields, he promptly took me under his wing—hiring me to work for him, first as a typist, then as a researcher and writer. He buoyed me up when I was at my most despairing, offering advice and, most importantly, understanding and love. “I will go with you, just like a father” Mentor promises the young Telemachus, and so did this man with me. His sudden death catapulted me into an awareness of finitude, leading me to finally commit to a path in life.

More recently, I was assigned a mentor by an organization in a field I was hoping to enter. This mentor, a woman younger than I and until then a stranger, has now become one of my dearest friends, someone I laugh and talk with regularly, someone I cannot imagine not having always known. Without her, I’d still be floundering.

These two mentors–one informal, the other formal–mark two crucial stages in my personal and professional life. If I had not met them, I would not be writing this column. I might not even by alive. But they are not alone. As I look back, I recognize a multitude of mentors, a multitude of visits from “bright-eyed” Athena.

I think of my high school French teacher, a Holocaust survivor who inspired me with her resilience and modest good will; I think of the yoga instructors who have guided me to ease of mind and body; of the wise friends—including the FAR weavers—who have counseled and encouraged me at various stages of my journey. Of the strangers who cheered me simply by their presence, the men and women who crossed my path and helped in ways both great and small.

Which is why I value the Odyssey so much, despite its patriarchal bent—because it offers a world-view that sees the goddess everywhere, encouraging us to open ourselves to apparently random encounters.

When she was a young woman, walking alone in the desert outside Cairo, my mother came upon  an ancient Greek coin, a silver tetradrachm with the image of Athena on one side and the owl that represents her on the other. I still have that coin. For years I’ve been meaning to have it set as a pendant, so that I might wear it as an amulet, a talisman, around my neck. It’s time now to make that happen, to honor and recognize the goddess who’s played so big a part in my life—my Mentor. 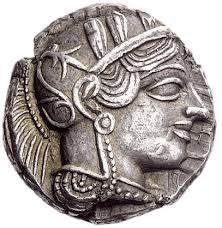 Joyce Zonana is the author of a memoir, Dream Homes: From Cairo to Katrina, an Exile’s Journey. She recently completed a translation from French of Tobie Nathan’s Ce pays qui te ressemble [A Land Like You], a novel celebrating Arab-Jewish life in early twentieth-century Cairo, forthcoming from Seagull Books. Joyce served for a time as co-Director of the Ariadne Institute for the Study of Myth and Ritual. Her translation of  Henri Bosco’s Malicroix is available from New York Review Books Classics, and her translation of Jósuè d’Arbaud’s The Beast, and Other Tales is due out in September from Northwestern University Press.