The Mask and the Mirror-Part 1 by Sara Wright 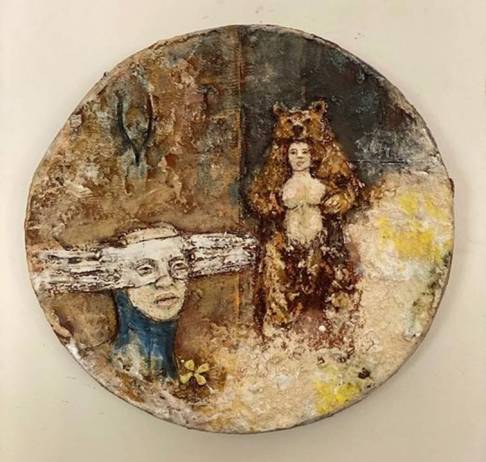 When I first saw this extraordinary clay round last spring I was immediately captured by the story being told. As I recall it was the second, and to me, the central image in a series of three that Debra Fritts created. To paraphrase Debra’s words these forms were hand built from Stoneware clay and underwent multiple firings with layers of oxides, under-glazes, and glazes during the spring of 2020. They expressed her daily thoughts and experiences. When I asked her about the order in which the pieces came into being she told me that it was hard to say because she built all three forms at the same time and then added the relief.

Debra is an incredibly gifted artist who lives in Abiquiu, New Mexico. She seems to have a pulse on Western Culture especially from a feminine standpoint that penetrates the hearts of many women and men. It is no wonder that she has become so well known and loved.

What follows is a personal exploratory analysis of this particular relief, a technique I learned many years ago from an art teacher I had in graduate school that helped me to articulate what I saw and felt when I gazed at a piece of work that I loved.

The focus of this exploration will be on this central piece. However, towards the end of this analysis I will briefly attempt to situate this relief in the storied frame of the series as a whole.

It is important to add that I am working from photographs and this severely limits my ability to portray what I am seeing accurately. Clay is a living breathing entity that erupts/materializes in three dimensions; any photograph removes this quality of depth or breadth. For this reason I have asked Debra to clarify details of a couple of images; others I have left to my imagination.

Art moves us from within. Sometimes a piece will call to us on a purely personal level because it taps into some aspect of our own experience. However, if a sculpture has an archetypal aspect to it, and by this I mean that the subject portrayed taps into a universal form or idea, one that carries both energy and information, then that artist becomes a vehicle for collective energy and information that transcends the personal. When this happens many people within a particular culture and/or across cultures are drawn into relationship with the art-work. Archetypes can be understood as universal patterns that are personal, cultural, and transcultural – these are empty forms that must be filled by human creativity/activity.

I believe that an archetypal aspect informs most if not all of Debra’s work. It’s not that her personal story isn’t being told or is lacking in importance, it’s that this gifted artist has access to both – her story and that belonging to the culture at large. Debra acts as a vehicle for the transpersonal to come through; there is a mystical aspect to her work that must be included in the whole. This ‘both and’ quality expresses a reality few artists are able to attain and embody through their art.

As I recall I first saw a photograph of this sculpture last spring not long after the Corona virus pandemic erupted. Immediately I was struck by the realization that this one image expressed both the problem and pointed to a way of dealing with the pandemic. When I looked at all three images together I saw the central story in relationship to women. The phrase “the mask and the mirror” came to me almost immediately.

Dark tones permeate most of the round but are most intense overhead. At the top left, almost obscured by dark browns with a hint of slate blue is an image of a “wish bone” – a very curious symbol. Immediately I think of children. As a child my brother and I would each take hold of the wishbone of either a turkey or chicken, and make a wish. Whoever broke off the largest piece had his/her wish come true…but this bone is upside down suggesting that something is very wrong. A reversal. To strip something to its bones is to express underlying truth. Bones, of course, are also symbolic of death. There is an unmistakable poignancy here, blurred, almost hidden in darkness. An absence or loss of children or a child aspect of self is imaged here?

Below, on the left, a gauzy mask that barely obscures the upper half of the anonymous woman’s face. Literally, the mask speaks to the Powers of Air and the threat that the Corona virus poses as an airborne disease that spreads rapidly through the air we breathe; movement of the wind increases the chance of outdoor exposure; stagnant indoor air is worse. However, this mask covers neither nose or mouth so it has nothing to do with protection from the virus. However, to see through the mask is to penetrate illusion. In this way of thinking, the mask is a symbol of woman’s ability to access truth.

Debra uses the same face in all of her female sculptures. I think of her as ‘Everywoman’ and here the woman seems almost numb. The suggestion that she has no physical protection may also be highlighted by a ‘see through’ mask. The streaked aspect of the mask speaks to rapid movement. Covid is a dire threat and women are being separated from loved ones as a result of the need to isolate… Think too of the opposite problem – many women will become caregivers who are on the frontlines living unprotected lives in order to save the lives of others during this pandemic. Nurses, doctors, teachers, food service attendants, waitresses, housekeepers, child providers, mothers of all kinds, dedicated to serving humanity. Women represent those who are most at risk because so many are in caregiving positions. In addition to numbness I think courage, compassion, endurance, and grief are mirrored by the expression on this ‘Everywoman’s’ face…

The woman’s eyes are open but unfocused suggesting that she sees in a softer way. To soften our vision often allows us to see differently. The right eye (the left in reality) is encircled by a circle, a monocle? Glasses of any kind improve sight and the left eye speaks to the unconscious, intuitive side of ourselves, the part of us that is able to see through illusion/delusion and can

gain insight from within. A woman with the gift of Second Sight can read the future.

Sara is a naturalist, ethologist (a person who studies animals in their natural habitats) (former) Jungian Pattern Analyst, and a writer. She publishes her work regularly in a number of different venues and is presently living in Maine.