The ten students in my fall 2011 class at ABSW, Reading OT Biblical Characters, are currently being instructed to read broadly. I tell them to develop their sensibilities as a reader so that they have a greater capacity to serve the needs of their communities. I challenge them with a question like-How do you liberate a biblical character that is not in a biblical story because they/he/she are/is never directly mentioned, given voice, or described? Or,what is the value of investigating the tensions between the story and the discourse exhibited through minor and major biblical characters? I ask them these questions because half of the students are advocating on behalf of a group that is socially, politically, economically, and/or spiritually underserved. The other half is training to develop themselves as scholars and educators of biblical literature. In the class room, regardless of path, everyone is required to be both scholar and servant.

Each student is asked to develop her or his final project with an ideal audience in mind. To whom do you see yourself presenting this semester-long project? The larger question behind that is whom do you serve?

I often use reading experiences with my 3-year old daughter to nuance a point in class about literary theory, the communities we serve, or the relationship between literature and life. Service is not always formal or a choice. Sometimes it is an opportunity that presents itself. 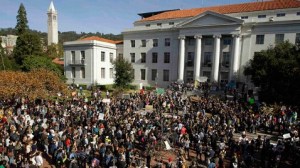 The recent Occupy movements can be felt everywhere in the East Bay, but especially in the cities of Oakland and Berkeley. My daughter has recently been asking many questions about the Occupy Berkeley encampment that she sees everyday on Martin Luther King Way when we drive my husband to and from work. We explained that the protesters are like Mack from Yertle the Turtle. They are challenging the oppression (yes we use that word with our 3 year-old) of those that act like King Yertle.

If you have never read Yertle the Turtle by Dr. Seuss, it is a traditional Seussian tale with the expected meter and imagination. For those whose memories of Dr. Seuss extend only as far as How the Grinch Stole Christmas, Seussian tales have a moral but are not moralistic. They are didactic but not heavy handed. His stories are amusing and each page has a pithy perspective for both the reader and readee. What is illuminating is that to quote Seuss himself, his work is “subversive as hell.”

Yertle the Turtle is a post-WWII tale that rails against tyranny and fascism. There was no way Theodor Seuss Geisel, Dr. Seuss, could have foreseen the rise of the Occupy movements sweeping America and the world today, much less that his tale of a plain little turtle named Mack would teach a 3-year old girl named Eva about the suffering of the many explained through the experiential suffering of one.

The two characters brought into prominence in this tale are King Yertle and Mack. What separates these two characters in the story is a growing stack of turtles that obey the commands of the King to come with their families and use their turtle bodies to create his throne. From his position high-a-top his turtle stack (first 9 turtles, then 200, then 5,607) King Yertle discloses a key insight to his moral compass, “‘I’m ruler’, said Yertle, ‘of all that I see./But I don’t see enough. That’s the trouble with me.’” With each command to add more turtle bodies to his thrown, the turtle at the very bottom named Mack is stepped on, climbed over, and weighed upon by the physical reality caused by the command of “the world’s highest turtle.”

Then again, from below, in the great heavy stack,

Came a groan from that plain little turtle named Mack.

But down here below, we are feeling great pain.

I know, up on top you are seeing great sights,

But down here at the bottom we, too, should have rights.

We turtles can’t stand it. Our shells will all crack!

Besides, we need food. We are starving!” groaned Mack.

Don’t be fooled by the quatra-meter. The tale and characters, though constructed for children, formulate an allegorical message that is simple and profound. There is a great disparity between the point of view of a solitary few at the top and those feeling the greatest distress at the bottom.

The first time we read this passage to Eva she said, “Why won’t he feed Mack? Mack is so hungry.” Her needs at this point in life are as basic as Mack’s- food. Sustenanceis a right. Withholding food or setting up structures that prevent individuals from having consistent access to food is an injustice and an assault against dignity. The relative safety of Eva’s life has prevented her from noticing the physical mistreat to the turtles’ shelled bodies created by an unnatural perch for a turtle. She is too young, maybe too sheltered, to empathize with their bodily jeopardy. She, nevertheless, brings herself to the reading. She brings her experiences of life, other literature, and relationships.

The biblical texts for our class are the books of Joshua and Judges. They witness to two different accounts of military exploits used to establish a foundational claim to the land of Canaan. The accounts are at times gruesome, sad, triumphant, and humorous.  They contain a breadth of human experience and each student brings herself and himself to the text every time we read it.

Depending on the needs of our communities of service different aspects of what we have read will be investigated, highlighted, interpreted, and mediated with appropriate language and analogies. My students are encouraged to develop themselves broadly. Cultivate yourself as a scholar and a servant. In doing so, the text will become more revelatory. Each time something will be revealed anew.

And today the great Yertle, that Marvelous he,

Is King of the Mud. That is all he can see.

As turtles and, maybe, all creatures should be.

This article was originally posted on the Official Blog of the American Baptist Seminary of the West.

Corinna Guerrero is a 5th year doctoral student at the Graduate Theological Union (GTU) in Biblical Studies with specializations in Hebrew Bible and Literary Theory. She will be proposing her dissertation on Adoni-bezek and Characterization Theory in the near future. In addition to her studies Ms. Guerrero is currently a Newhall Teaching Fellow at the GTU and an Adjunct Instructor at the American Baptist Seminary of the West. In her personal life Ms. Guerrero is also a wife and mother of a 3 year old daughter named Eva.

Like Loading...
‹ Women Are More Spiritual than Men? The Mormon Conception by Caroline Kline
The Dark Half: Reflections on the Winter Solstice By Xochitl Alvizo ›