Home › Eco-systems › Bird Watching and Geology in the Body of Goddess by Carol P. Christ

Bird Watching and Geology in the Body of Goddess by Carol P. Christ

The notion of the earth as the body of Goddess has taken on deeper meaning for me in recent years.  I have felt connected to nature all of my life.  Yet often, though not always, I have related to nature in general rather than in specific ways. Some years ago, after reading Hartshorne’s essay “Do Birds Love Singing?” I stopped for the first time in the wetlands of Kalloni, Lesbos, to see the flamingoes that live in the salt pans there.

One thing led to another, and I met someone with whom I spent the next six weeks visiting every pool and puddle where birds were stopping in Lesbos that spring.  I would have said that I had always loved birds, but I had not studied them or even paid any particular attention to their differences or habits.  Over the next several years I spent countless hours in bird habitats and pouring over books, during which time I learned to identify over 300 species of birds that live in or migrate through Lesbos. I also learned that Lesbos has a wetland ecosystem that is an important resting place for birds flying all the way from Africa to Europe in the spring.  Bird watching can be and is for me a practice of meditation on the beauty of the world, in specific form. To find birds you must learn something about their habits and habitat. But you must also look closely and wait patiently for them to appear.  To be able to watch a an elegant and shy black stork fish in a seasonal river, you must also be lucky, for black storks generally fly off as soon as they see people.

Part of the magic of bird watching is that just when you feel disappointed in not finding a bird you have been looking for, a bird you were not looking for flies into a puddle right in front of your car. It may be a common and familiar bird, like this European greenfinch, but watching it bathe in a puddle is magical. This for me is the grace of life.

Through bird watching I learned that if I love Mother Earth, I would do well not just to admire sunsets, but to learn more about the varieties of life that make up her body.  Sadly, as I became intimate with specific birds and the places they loved, I also became intimate with the degradation of wildlife habitats in Lesbos.  For over ten years now, I have been engaged with others in the struggle to protect the wetlands of Lesbos for the birds. I spent more than a year of my life writing a detailed Complaint to the European Commission concerning the failures of the Greek governmental authorities to protect the wetlands of Lesbos as required by the European law Natura 2000.  The more intimately you love the world, the more you suffer when it is violated. Now when I see degraded wetlands, I feel that parts of my own body have been harmed.  I now know that when Alice Walker’s Shug said, “if I cut a tree, my arm will bleed,” this was not hyperbole but an accurate description of feelings in the body.  Because of my environmental work, I have been given the great honor of having been asked to run for office on the Green Party ticket in the regional and national elections in Greece. This is one of the ways I am giving back to the earth and to the Greek people who have given me so much.

At the time I began to learn about birds, a geologist came on the Goddess Pilgrimage to Crete.  She spoke to our group about the great upheavals in the earth that pushed the mountains of Crete (and the Alps) up from the sea floor over 200 million years ago, beginning to shape the continent of Europe as we know it today. 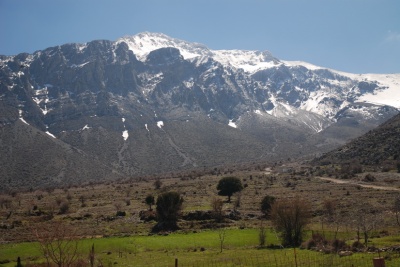 Until then, I had imagined that Crete and Lesbos had similar geological histories. After all, they were both Greek islands.  Visiting the Museum of Natural History in Sigri, Lesbos, for the first time, I was surprised—astonished really—to discover that Crete and Lesbos have very different histories. While one of Lesbos’s mountains arose from the sea at the time of Crete’s mountain formation, the others were shaped by massive volcanic action between 22 and 16 million years ago, that created the Aegean Sea in which I swim on summer days.  My eyes were opened to the differences between the porous volcanic rocks of which my village is built and the smoother, denser, marl or marble-like bedrock of Crete that was formed from plankton under the sea.  For the first time, I noticed that the stones of the houses and streets and walls of my village are not uniformly “grey,” but that some are purplish, some are pinkish, some are greenish, and there are many other shades 0f grey. 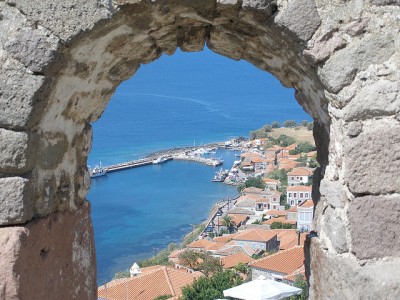 The word, ge-ology comes from “ge” which is the ancient Greek word for earth.  Learning about the evolution of the earth and about the geology of the islands I love is a way of learning to know and love our mother earth more deeply and more intimately.  Now I see her history in the crevices of her body every day. 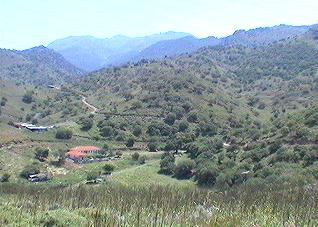 Carol P. Christ spoke on a WATER Teleconference on January 16, 2013 which you can listen to now if you missed it.  She is a founding mother in the study of women and religion, feminist theology, women’s spirituality, and the Goddess movement.  She has been active in peace and justice movements all of her adult life.  She teaches online courses in the Women’s Spirituality program at CIIS. Her books include She Who Changes and Rebirth of the Goddess and the widely used anthologies Womanspirit Rising and Weaving the Visions.  One of her great joys is leading Goddess Pilgrimages to Crete through Ariadne Institute.