Since 1985, I have been researching Balkan folk dances and teaching them in women’s circles all over the world. Common symbols in dance patterns, textile motifs and archaeological artifacts from southeastern Europe have remained the same from ancient times to the present, which leads me to suggest that the dances may be descended from ritual practices dating back to Neolithic times. In my view, these patterns serve as a symbolic language, expressing reverence for the cycle of life. Emphasizing connectedness and continuity, homecoming and support, women’s ritual dances can rekindle ancient values of sustainability, empathy and equality, and provide an antidote to the alienation of self which is epidemic in the western world. In nearly thirty years of teaching, I have found that women all over the world respond to these dances as valuable tools for healing and self-discovery.

As is so often the case with women’s experience, my own journey to healing first showed me the way. I first came across traditional circle dances in the early 1980s, in international folk dance groups in the USA where I grew up and at the Findhorn ecological community in northern Scotland. Folk dances with symbolic content had been brought to Findhorn in 1976 by German dance master Bernhard Wosien and his daughter Maria-Gabriele Wosien, and from there spread around the world. Under the name of Sacred Dance, Circle Dance or Sacred Circle Dance the folk forms were adapted as a means to encourage group awareness and facilitate a conscious connection with the divine.

As I searched out and studied diverse forms of folk dance and sacred dance, I was led to focus on traditional women’s dances literally by accident. When I was twenty, a serious knee injury threatened to end my career as a dancer. The only circle dances I was able to engage in were the slowest, simplest ones, which turned out to be women’s dances. I did not know much about them at that time and was surprised to find them so compelling. With no complicated variations to distract me from myself, I learned to let the repetition of the steps, like the repetition of a mantra, bring me in touch with my truest self and deepest feelings. Just as in meditation, this simple, yet powerful process created a trancelike atmosphere which invited me to be fully present. 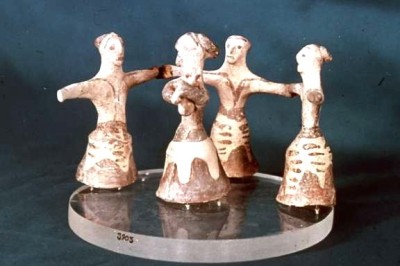 Women’s ritual dances gently yet firmly invited me back into my body. In their ancient patterns, I felt I could perceive the living, compassionate presence of the grandmothers of the human family who had initiated the dances and passed them on. In the same way that meditation practice is supported by a sangha, or community, I experienced how a circle of women all dancing identically allows each woman to feel deeply held. The kinesthetic unity of the circle transcends difference without denying it; competition and conflict are transmuted into co-creation. The dances strongly connected me with an understanding of life – in all its variety, with all its ups and downs – as sacred. The sensation of energy which flowed through me while dancing in this meditative way, along with intense intuitive flashes and unexpectedly practical insights, eventually wove me back into the web of life.

Although specialists had told me I would never dance again, the deceptively gentle ‘medicine’ of the women’s ritual dances helped my knee to heal without surgery and brought me out of the depression that had come in the wake of the injury. Dancing has remained at the heart of my life. Deeply fascinated with the dances and what I perceived to be their healing potential, I used my training as a dance movement therapist to focus as much as possible on the therapeutic use of circle dance and devoted every spare moment to what has become a lifelong dedication to this quest. As I spent more and more time both researching and teaching these dances, in Europe and all over the world, I found that they fulfilled my deep longing for meaningful connection. They brought me back into rightful balance with myself, with other women, and with an ancient lineage of dancing women going back through time. Looking back, I feel profoundly grateful for the initial healing crisis which led me to discover the hidden power of women’s ritual dances.

Over time I saw that they fulfilled similar longings in other women too, even for women whose own background is far removed from the areas of Eastern Europe and the Near East where the dances have their origins. These experiences led me to to focus on working consciously with the dances in women’s groups, as tools to access a source of wisdom greater than ourselves. Just as women’s ritual dances are differentiated from other dances by the context of a ritual occasion, in my circles it is the context we create for our dancing, and the consciousness we bring to it, which facilitates a dance experience we may name as sacred. The dances are not a performance; everyone present participates. We dance for ourselves and not for an audience. In the absence of an external onlookers’ gaze, our attention is directed away from concerns about how we look and what others might think, and toward a more focused awareness of our own inner being.  Paradoxically, this inward focus may also help us connect with something larger than ourselves, a sense of oneness with all of life. This is the most important source of healing for women in the modern age.

Laura Shannon has been researching and teaching traditional women’s ritual dances since 1987. She is considered one of the ‘grandmothers’ of the worldwide Sacred / Circle Dance movement and gives workshops regularly in over twenty countries worldwide. Laura holds an honours degree in Intercultural Studies (1986) and a diploma in Dance Movement Therapy (1990).  She has also dedicated much time to primary research in Balkan and Greek villages, learning songs, dances, rituals and textile patterns which have been passed down for many generations, and which embody an age-old worldview of sustainability, community, and reverence for the earth. Laura’s essay ‘Women’s Ritual Dances: An Ancient Source of Healing in Our Times’,  was published in Dancing on the Earth.

Like Loading...
‹ Etain, The Shining One – Celtic Sun Goddess/Goddess of Transformation by Judith Shaw
Brigid, Archetype of Inspiration and Activation by Stephanie Anderson Ladd ›