Home › Christianity › No Parenting Anxieties (Yet?) About Passing Down the Faith by Grace Yia-Hei Kao

No Parenting Anxieties (Yet?) About Passing Down the Faith by Grace Yia-Hei Kao

I’ve recently read Jim Belcher’s In Search of Deep Faith: A Pilgrimage into the Beauty, Goodness, and Heart of Christianity (2013). Even though I had several issues with the book, I couldn’t put it down once I started reading and finished it in the space of one day.

What’s the book about?

After spending a decade planting and leading a church, raising four children, writing his first book, and fixing up an old house, the author found himself totally worn out and in deep need of spiritual rest. So, too, did his wife Michelle who desperately craved “some time away from the bubble that was pastoral ministry, where every decision or action was open to scrutiny, where private life was difficult to maintain.”

So the couple took their four school-aged children and embarked on a yearlong journey across Europe. In addition to recharging and recuperating, the plan was for them all to explore the biographies and places of some of the great heroes of Christian faith. 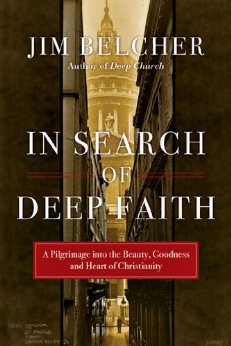 Their pilgrimage sites included C.S. Lewis’s Oxford University, Dietrich Bonhoeffer’s underground seminary and place of imprisonment, Vincent Von Gogh’s asylum in Saint-Rémy, the French village of Le Chambon that served as a haven for 5000 or so Jews fleeing the Nazis and their French collaborators, the key places in the life of Maria von Trapp (of Sound of Music fame), and others.

The book was an inspiring read. I found myself entertaining thoughts of how some day in the distant future I, too, might manage to take an extended family trip that would also be rejuvenating, educational, and spiritually uplifting.

What I had (and still have) a hard time identifying with, however, is a parental fear explicitly named by the author that served as another part of the rationale for the pilgrimage. In his own words, “we worried about [our children’s] faith—would they grow strong in their trust of God or would they fall away?” Belcher was especially concerned about what would happen when his kids went to college “and faced all the temptations of university life, both morally and intellectually”: would they “abandon the faith because it did not mean much to them…[because it would get] in the way of their happiness and success?”

I can’t say that I share this fear, let alone concern. Granted, my kids are only 4 and 6 and so

perhaps my time to worry will come later. (At this stage, my husband and I are preoccupied with much more basic than spiritual maters, like getting our 4 year-old to be less picky of an eater and teaching our 6 year-old how to have better impulse control.)

On deeper reflection, however, my inability to relate to this apparently widespread  concern about passing down the faith is probably tied to my own baggage. When I majored in philosophy and religious studies in college, countless individuals from my evangelical Christian community (though fortunately not my parents) expressed worries that I would “lose my faith.” I remember being warned away from taking academic courses on Christianity or the Bible because they weren’t taught by “believers.” These fears of others only grew when I pursued a doctorate in theology and philosophy at Harvard. I resented their paternalistic interventions and wanted to pursue “the truth”—wherever that led me.

[It would be appropriate here to note an important contrast: the Belchers tackled their fears for their children by providing them with more knowledge and experiences while members of my home community wanted to prevent me from having either.]

Sure enough, one doesn’t emerge from a serious study of philosophy, theology, and religion

unscathed and the faith that I had prior to these studies is not the same as the one I have now. I still identify strongly as a Christian today but my understanding of what that means has dramatically changed. To provide some simple points of contrast, I am a feminist, straight ally of the LGBT community and an animal advocate—and for reasons grounded in my Christianity—in ways that I was not before.

Perhaps as my children grow older, I will understand this concern better Indeed the book Families and Faith: How Religion is Passed Down Across Generations (2013) is on my summer reading list. Right now, however, as we are knee-deep in swim lessons, sight words, vegetables that must be eaten before dessert, and sunscreen that must be applied on a daily basis, I can be grateful that I have one less thing to be worried about!

Grace Yia-Hei Kao is Associate Professor of Ethics at Claremont School of Theology  and Co-Director of the Center for Sexuality, Gender, and Religion. She is the author of Grounding Human Rights in a Pluralist World (Georgetown University Press, 2011) and is working on two co-edited book projects–one on Asian American Christian Ethics (under contract with Baylor University Press) with Ilsup Ahn, the other on a theological exploration of women’s lives with Rebecca Todd Peters. You can learn more about her life and work on her personal website.