Medb, Celtic Sovereignty Goddess of Connacht, the wilderness in the Irish west, ruled war, fertility and the earth. A man became king of Connacht only by participating in a ritual of intoxication and entering into sacred marriage with Medb at Connacht’s mystical center, Tara. She had an insatiable sexual appetite, taking men as she pleased and marrying at least four, who became King of Connacht in their turn. Her first husband was probably King Conchobar of Ulster, with whom she had seven sons and later became her mortal enemy. With Aillil she had three daughters. 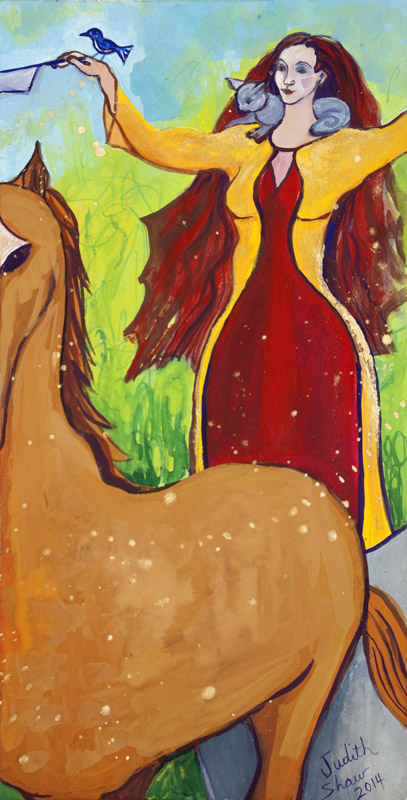 Medb, translated as “strong” or “intoxicating”, drove men wild with desire at the mere sight of Her. Indicative of Her connection to the earth and fertility, She clothed Herself with live birds and animals across her shoulders and arms. Further evidence of Her strength, sexuality and passion lies in Her ability to run faster than any horse.

Medb claimed to have originally come from, Cruachain, a site that the ancients believed held the entrance to the Otherworld.

Queen Medb, most likely an aspect of the Goddess Medb, reigned during a time when Celtic women maintained a status of freedom and equality not granted to women in most other parts of the world. They both owned property and held important positions in society. Who ever possessed the most wealth in a marriage, could be considered the ruler of that household.

Queen Medb, more commonly know today by Her Anglicanized named Maeve, is a central character in one of the most important old Irish epics, the Tain Bo Cuillaigne, or the Cattle Raid of Cooley. Characters and actions from other Irish tales come together in this story. The curse of the Goddess Macha/Epona on the men of Ulster, Ailill who was so smitten by Etain, Lugh, God of the Tuatha Dé Danann, Cu Chulainn, the great Irish hero, and the Morrigan with Her blessings of life and death all appear in this extraordinary legend.

This long, bloody event all began innocently enough one evening while Medb lay in bed with Her husband of the moment, King Aillil. Aillil, attempting to prove his superiority and maintain his position, claimed he had more wealth than Medb. On all counts they were equal until Aillil mentioned his ownership of the magical and incredibly fertile bull, Finnbhennach. Fennbhennach had actually been born into Medb’s herd but due to the changing values of the time, disdained being owned by a woman and thus transferred himself to Ailill’s.

Medb, not one to accept defeat or an inferior position, determined to get the equally fertile bull, Donn Cuailnge from Cooley in the county of Ulster. After a deal broke down to get the bull by negotiation, Medb raised an army of both Her men and exiles from Ulster led by Her lover, Fergus mac Roich. They set out to capture the bull, Donn Cuailnge.

Medb led Her men into battle. At first She prevailed, for upon sight of Her the men of Ulster fell down in convulsions of desire, unable to resist or fight. In addition, the Ulster men suffered from the curse of the Goddess Macha/Epona, who was also able to run faster than any horse.  Because of this curse, in the hour of their greatest need they fell down as if pregnant with terrible labor pains, incapacitated for battle. Only the mythic Irish hero, Cu Chulainn, a mere youth at this time, was able to prevail against Medb, first with an unsuccessful guerrilla campaign, then by invoking the right of single combat at fords. Cu Chulainn received both help and obstacles from supernatural beings like the Morrigan and Lugh.

After many months the story culminated in the final battle. In the beginning of this battle, Cu Chulainn who was recovering from his wounds, stayed out and Medb, with the help of Fergus mac Roich triumphed. But various conflicting promises and allegiances confused the issue and ultimately Medb and Her forces were forced to retreat. But She was not defeated. She achieved Her original goal, bringing the bull Donn Cuailnge back to Connacht. And yet this tale, which began with a comparison of wealth between the royal couple, ends with an ironic twist that canceled out the loss and the gain. Donn Cuailnge fought and killed Aillil’s bull Finnbhennach, but he was also mortally wounded and later died. After many months of battle and many deaths, Queen Medb and King Aillil were finally equal in wealth, but not in power. The power remained with Queen Medb, Sovereignty Goddess of War and Fertility.

Medb brings us the awareness of the intoxicating power of passion. She personifies the passion of love and desire; of anger and war. Call on Medb to maintain balance and good intent with your passions. Medb opens the door to the acceptance of our own sovereignty, to owning our power, to claiming our truth. With Medb by our side, we can ride forth to battle those who would rob us of our birthright as fully sovereign beings.

Judith Shaw, a graduate of the San Francisco Art Institute, has been interested in myth, culture and mystical studies all her life.  Not long after graduating from SFAI, while living in Greece, Judith began exploring the Goddess in her artwork.  She continues to be inspired by the Divine Feminine in all of Her manifestations. Originally from New Orleans, Judith now makes her home in New Mexico where she paints and teaches part-time. Her work, which expresses her belief in the interconnectedness of all life, can be seen on her website at http://judithshawart.com

Like Loading...
‹ Kali Ma, The Dark Creator and Destroyer by Nancy Vedder-Shults
We Could Have Been Canadians and Other Thoughts about My New England Colonial Heritage by Carol P. Christ ›